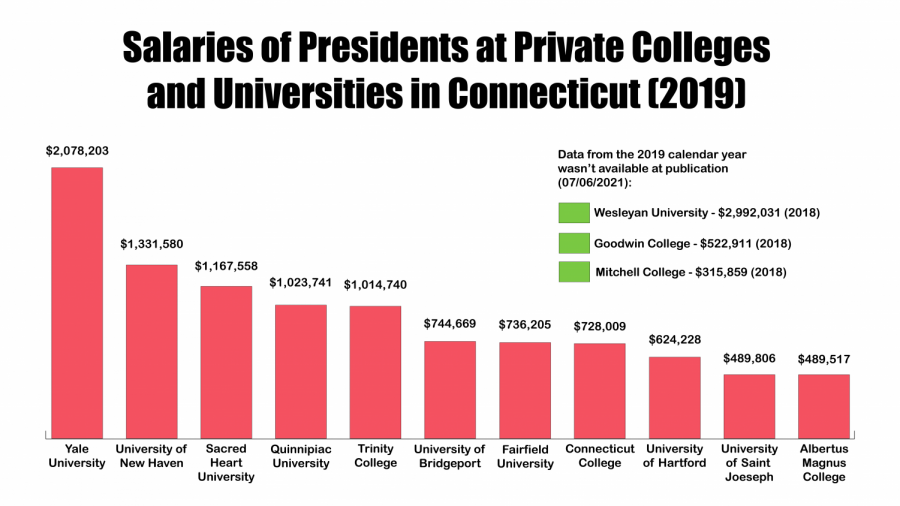 Quinnipiac University President Judy Olian earned $1,023,741 during her first full year at the university in 2019, according to the 990 tax filing form for the fiscal year ending June 2020 that the IRS released in June.

Since the salaries in the 990 form were reported by calendar year (2019) instead of fiscal year, Olian’s income did not include the 20% pay reduction she took last school year beginning in April 2020 due to the COVID-19 pandemic.

Olian made $524,436 during her first six months (July to December 2018) as Quinnipiac president. She made $449,579 during her last six months (January to June 2018) as a dean of school of management at the University of California Los Angeles.

In 2019, among 11 Connecticut four-year private colleges and universities with the 2019 fiscal year 990 forms available as of July 6, the Quinnipiac president’s salary came in fourth. Presidents of Yale University, University of New Haven and Sacred Heart University made more than Olian, according to their 990 tax filing forms.

At Quinnipiac, the following were the nine highest-paid employees in 2019, according to the filing:

Besides salaries for employees, Quinnipiac spent $3.15 million for services from the five highest-compensated independent contractors.

Architectural company Apicella + Bunton received $1.04 million from the university in 2019. According to the company’s website, it led the renovation of Larson, Perlroth and Troup residence halls.

According to the building permits Hamden issued for the air conditioning unit installations in the three residence halls in May 2019, the project’s estimated cost for each hall was at $1.05 million.

Another set of permits were issued the same year in September for a full interior renovation of the three residence halls, the estimated cost for each hall was at $1.9 million. The renovation came after asbestos was found in the walls.

Quinnipiac paid interior construction and furniture company Strategic Spaces $743,257 in 2019. Architectural company Centerbrook, one of Quinnipiac’s lead architects that was not chosen to develop the 10-year master plan, also received $425,786 from the university in the same year.

Associate Vice President for Public Relations John Morgan did not respond to questions about what projects each contractor worked on.

However, after going through building permits issued by Hamden and North Haven, the following were some of the major construction projects that happened in 2019 besides the three residence halls. The following costs only included the estimated costs listed in the building permit of each project, it did not include costs listed in its electrical, mechanical and plumbing permits.

Out of the 10 projects above, eight listed FIP Construction as a primary contractor, as well as the three residence halls. Centerbrooks worked on the Learning Commons offices and On the Rocks pub on York Hill. Another architectural company, Amenta Emma, worked on Olian’s house, Student Health Services reception area and the CAS advising common.

Another section in the 990 form that has not been reported as often in past years was the university’s statement of activities outside the United States. Quinnipiac spent a total of $53.4 million in the category. The amount did not include scholarships it offered to international students.

Out of the total, $5.6 million was grantmaking money for different regions including North America, Central America, Asia, Europe, Middle East, Africa and Russia and neighboring states. Around $647,000 were expenses for study abroad programs. The majority of the funds, or around $47.5 million, were labeled as “investments” in the Central America and the Caribbean region.

Quinnipiac’s spokesperson declined to comment on the university’s investments outside the U.S., instead, he provided the following statement:

“The university’s financial reporting and budget-related information is released annually through the IRS Form 990,” Morgan wrote in an email. “The university does not release additional details about its operating budget outside the 990.”