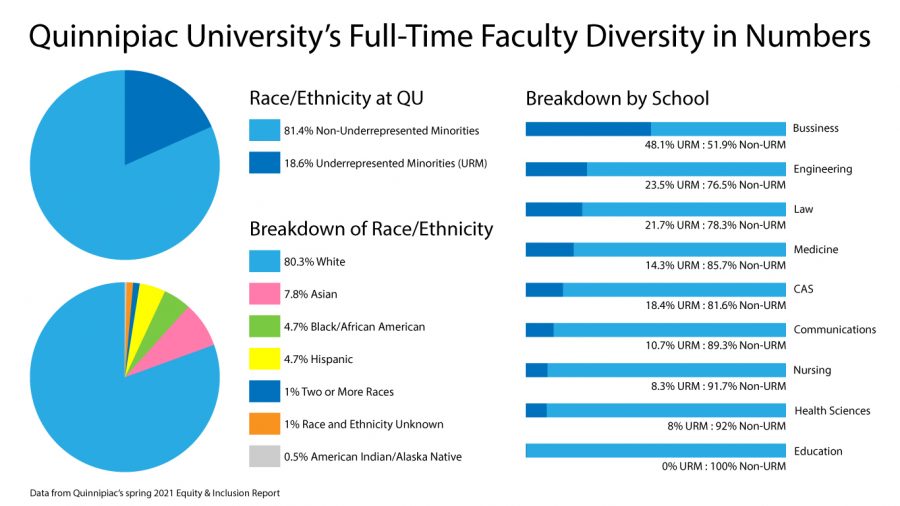 With over 80% of white full-time faculty members at Quinnipiac University and less than 25% of underrepresented minorities at eight of the nine schools, students and professors said more representation of faculty of color is needed to expose students to different perspectives.

Junior athletic training major Christy Valentin has taken classes with only four professors of color since she came to Quinnipiac, and none of the four were Latino like her.

“Although it does not surprise me, it does disappoint me to see the actual numbers and the lack of the diversity in the faculty,” Valentin said. “We need more faculty of color, especially seeing that we lack diversity in the student body as a whole.”

According to the university’s spring 2021 diversity and inclusion report, only 18.6% of the full-time faculty members identify themselves as underrepresented minorities in 2020. It was a 0.6% decrease from 2019.

However, President Judy Olian said that 59% of the new hires in the first three months of 2021 were people of color, and 34% of the hires in 2020 were also underrepresented minorities.

Valentin said she appreciates her past white professors’ expertise, but there is a lack of relatability and comfortability that alters how she acts around them.

“I can chat with my professors and go to them with questions or concerns, and I value all their knowledge and hard work that they put into their teaching,” Valentin said. “However, I feel as though I must be reserved when I am around them for fear of being looked at in a different way.”

As a student, Valentin said having professors that look like her and understand what it was like to be in her shoes is encouraging to see and be around.

“It is also important in terms of classroom interactions and discussions, especially when the topic of race comes up, the pressure does not have to be on that one student of color feeling as though they must be the voice of their whole community,” Valentin said.

Senior political science and psychology double major Ana Allen also said it is “shocking but not surprising” that less than 20% of full-time faculty identify themselves as Black, Indigenous and people of color.

“While the numbers do not diminish the efficacy of our wonderful faculty, it does speak to the lack of diversity and intersectionality through lived experience,” Allen said.

Among nine Quinnipiac schools, none of the full-time faculty members in the School of Education identified themselves as underrepresented minorities, according to the report.

Assistant teaching professor of education Jennifer Dauphinais said the number is concerning but not unexpected as the white and female population has historically dominated the education field since 1890. Dauphinais said teaching was one of the only jobs women were allowed to do and get credit for.

“Now we’re up against another hurdle, which is not only trying to be considered professional or valid as ‘child caregivers,’” Dauphinais said. “But now also diversifying and understanding from a perspective of representation or the structures of supremacy that we need to get out of the way.”

As a white professor who teaches a diversity and multiculturalism course in a predominantly white institution like Quinnipiac, Dauphinais often received feedback from students that most diversity courses at the university seemed to emphasize and bring awareness to white and structural privileges. That leaves some students out, as a result.

“When folks from diverse backgrounds are already aware of that (concept), it’s, in a sense, a waste of their time to have to be an audience to the conscientious rising of white folks,” Dauphinais said.

Having a diverse set of faculty would shift that narrative because more perspectives would go into the curriculum-developing process, as Dauphinais said.

The College of Arts and Sciences (CAS) consists of 18.4% of underrepresented full-time faculty, according to the report. It is the school that most undergraduate students are likely to go through as it offers most of the required university curriculum courses.

Sociology associate professor Xi Chen said there is a lot of room for improvement as the United States Census Bureau reported that 60.1% of the country’s population are white and non-Hispanic, and the school’s current faculty composition does not represent that ratio.

“As much as students like to say that most learning happens outside of the classroom, personal interactions with a diverse range of faculty and students representing people of the world, is maybe more important than what us faculty say or do in the classroom,” Chen said.

Because Allen’s majors fall under the CAS, she said she often functioned in spaces where professors were extremely versed in diversity, intersectionality and discrimination. However, she still believes it is important to have more representation among professors.

“As a student researcher working in understanding the effects of biases in race, it is evident that one’s worldview can often shape their perspective,” Allen said. “It is important to have a mixture of multiple perspectives (intersectional experience) for students to make informed opinions.”

Chen said the real change needs to come from the faculty level as they are the ones who do the hiring.

“If individual faculty makes hiring people of color into (its) specific programs a priority, then it will happen,” Chen said. “It is as much a cultural shift on the faculty side as it is a structural shift on the administration side.”

That is something the School of Business has been doing in the past couple of decades. It is the most diverse school in terms of its full-time faculty as it reported 48.1% of underrepresented minorities, according to the report.

School of Business Dean Matthew O’Connor said he is proud of the work he and the faculty did in recruiting a diverse population from different countries. He said the school will continue to do what it is doing moving forward.

O’Connor explained that being inclusive and increasing diversity have been the goals for the school for almost 20 years, because business is a global enterprise that requires people from different backgrounds.

It began with some diversity hires two decades ago, which later resulted in a diverse search committee that made it easier to seek people from diverse backgrounds. O’Connor said it directly benefits students.

“Students are going to hear from different perspectives (and) are going to be able to talk to people who have different backgrounds,” O’Connor said. “That, for business, is just really important, because people do business globally. They don’t just do it locally.”

O’Connor also said the results of diversity did not only reflect in the classrooms but also in the curriculum as there were many perspectives put into the developing process.

Provost Debra Liebowitz said the diversity of faculty at the university level is increasing unevenly across all nine schools, and it is reflective of many things such as the history and number of doctorate holders in the fields.

In the past year, Quinnipiac has changed the process and the oversight of the process of faculty recruitment. Liebowitz said the university made sure to advertise new job postings where diverse people with qualified credentials can see.

The School of Business employed this strategy by joining a network and uploading new job postings on the PhD Project, a non-profit organization for workplace diversity. O’Connor said it has helped the school generate a diverse pool of applicants.

“If you kind of advertise in the right places, build out those networks and then make sure that anybody who’s going to be involved in a hiring process is committed to diversity, that will go a long way toward moving the university forward,” O’Connor said.

Liebowitz said there are other factors that go into the hiring process as well.

“With the full knowledge that you can have the best intent and you can want a more diverse faculty, but we need to choose the most qualified person for the job,” Liebowitz said. “Sometimes, that’s going to mean we’re going to diversify the faculty in a different kind of way and sometimes, that means we’re not.”

However, Dauphinais said diversity recruitment is difficult to begin with because the pay rate and support the university offers are not appealing to people of color.

“I think if you’re asking someone, especially someone from diverse backgrounds and identities, to come in and do the difficult work of joining the staff of a predominantly white institution but you’re going to pay them very low, that’s not appealing when they can go somewhere else with a more diverse faculty or a higher salary or compensation package or support,” Dauphinais said.

One of the points in the university’s 10-point plan involves improving policies and practices to enhance the pipeline and retention of underrepresented faculty, staff and students.

Liebowitz explained that the university put in place a retention program called “Path to Full” for newly hired faculty members. The program addresses challenges or barriers they may face.

She said changes are not easy, and it will not happen overnight, but Quinnipiac is committed to it.

“I know for me that a more diverse team means people (with) different kinds of experiences are going to think differently about ideas (and) are going to bring different things to the table,” Liebowitz said. “I don’t need a bunch of people who all think alike and have the same background, same experience (and) the same knowledge. That doesn’t help me move things forward.”