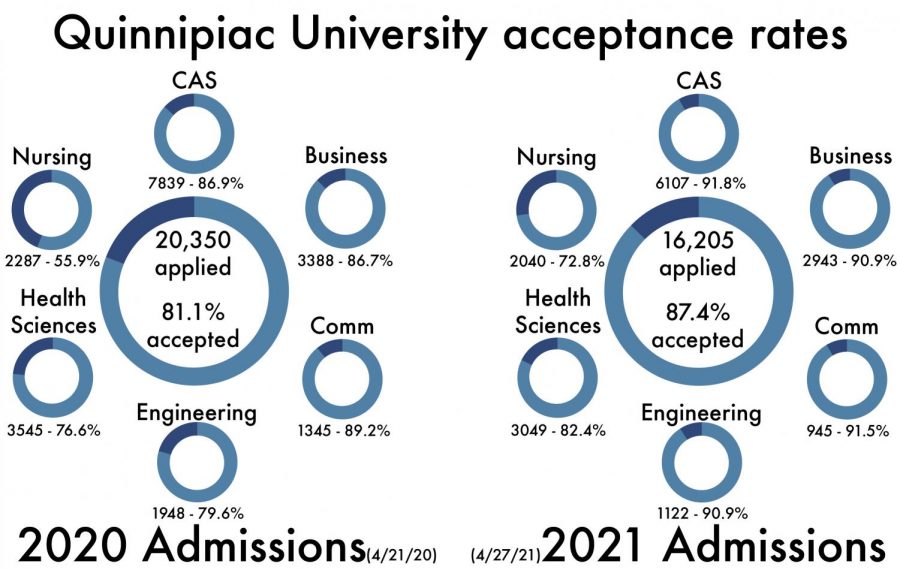 Quinnipiac University admitted 14,163 students from a pool of 16,205 applications for the fall 2021 semester as of April 27, resulting in an 87.4% acceptance rate, according to data The Chronicle obtained.

“The university does not release information about the number of applications or the size of the incoming class until after all the deposits have been received and the students officially arrive for the fall semester,” Morgan wrote in an email on April 26.

According to the data The Chronicle obtained, every school experienced a downturn in the number of applications this year. As a result, every school accepted fewer students, with the exception of the School of Nursing.

The following information is a breakdown of the admissions numbers as of April 27.

The College of Arts and Sciences received 6,107 applications, a 22.09% decrease from last year. It admitted 5,607 of the applicants, resulting in a 91.8% acceptance rate.

The School of Communications received 945 applications and admitted 865 students, which means the acceptance rate was at 91.5%. The application number went down 29.74% from last year.

The School of Engineering admitted 1,020 students within a selection of 1,122 applicants, reflecting a 90.9% acceptance rate. The application rate for the school went down 42.4% compared to the prior year.

With a 10.8% decrease in application rate at the School of Nursing, it admitted 206 more students than last year, which brings a total of 1,485 admits from a 2,040 pool of applications. The acceptance rate was at 72.8%.

In efforts to discuss the retrieved data, Morgan declined on May 4, The Chronicle’s request for an interview with Quinnipiac Vice President of Enrollment Management Eric Sykes saying that it is too early to comment on admissions trends or figures.

In an attempt to get an interview with Gregory Eichhorn, former Quinnipiac vice president for admissions and financial aids and current University of New Haven (UNH) vice president for enrollment and student success, about his perspective on the admissions process during his three years at Quinnipiac, UNH Media Relations Coordinator Carolyn Meyer declined on May 4, the request.

With the acceptance rate of 87.4% this year, math professor of The Citadel Military College of South Carolina Li Zhang, who researches overbooking models in college admissions, said colleges must admit more students in the anticipation that some students may not show up.

“In order to reduce the stresses caused by declining yield rates, colleges or universities often try to operate at full capacity and optimize revenue generated from tuition,” Zhang said. “I think QU probably has had the same pressure from the declining yield rate. (The) admissions office probably is nervous about the impact of the pandemic.”

Zhang explained that to determine the problems from over-admissions, many factors have to be looked at including the university’s capacity and the yield rates from previous years. However, in efforts to protect the university from the pits of financial ruin, Zhang emphasized that the luxury of over-admitting could be beneficial to the university moving forward.

Quinnipiac anthropology professor and Director of General Education Hillary Haldane said the university is a tuition-driven institution that relies on student costs to operate.

Given the acceptance rate of 87.4%, Haldane questioned the value behind those numbers when they are not a determining factor in distinguishing the quality of an institution’s education, but instead its prestige. She said the political economy of acceptance rates and their role in rankings within higher education maintain a system of inequality and oppression.

“We are competing for a shrinking pool of students in our region, against many institutions that ‘rank’ higher than us, and we don’t seem to have wide appeal or name recognition in the areas of the country where the demographics are more favorable,” Haldane said. “But I have a greater concern about the way we ‘rank’ institutions and how this competition breeds contempt.”

With the current economic state from COVID-19, Haldane said meeting the enrollment goal will continue to be difficult each year as Quinnipiac is an expensive university.

“Alongside the shift in demographic trends, the growing income inequality, and decreasing support for higher education from the government, will only continue to harm institutions like ours,” Haldane said.

Associate professor of journalism Margarita Diaz said that the current admissions climate is similar to her experience at the university during the 2008 recession because of the anxieties that come with high acceptance rates amid low applications. However, she poses dedication and trust in the university’s different admissions plan to admit qualified students.

Diaz said faculty members, including herself, feel strongly in working to ensure students receive the most enriching experience during their time at Quinnipiac.

“All I can do is trust that the administrators know what they’re doing and they’re doing the right thing,” Diaz said. “We’re going to get a very strong group of students in the fall, I have to trust in that.”

It is expected that the university will release finalized numbers on admissions come the fall 2021 semester.