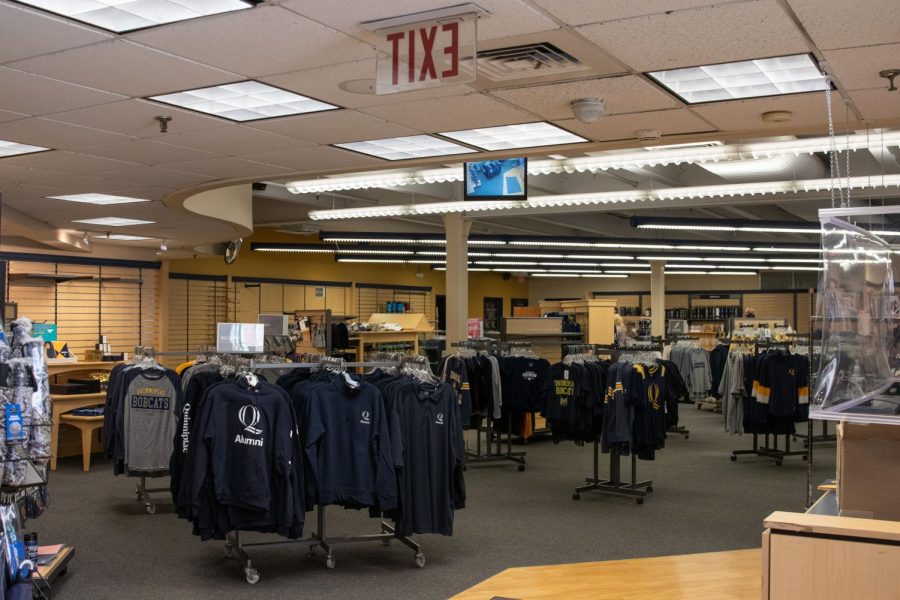 The bookstore is preparing for the next week of sales and will be restocking in the following days.

Quinnipiac University’s Dining Board announced the extension of students’ availability to use meal points at the university’s bookstore, according to Chief Experience Officer Tom Ellett’s email sent on April 22.

“Additionally, as a means to bring in new inventory, they will skip a week and then offer the sale again, taking meal points, from May 3 through May 7th at both Mount Carmel and North Haven Bookstore locations,” Ellett wrote in the email.

The extension is a direct result of positive student feedback from the first similar sale on April 19-25. The board hopes to help students use up meal points before the end of the semester on May 7. Students must go in person to purchase the specified items as the use of meal points is not permitted through online retail.

Various items were restricted from purchasing, such as textbooks, technology and gift cards. Refunds are not granted for any item bought at this time. However, there was no limit placed on how much students could buy.

Since this announcement, there has been a long line trailing outside the bookstore, often reaching out to the Quad. Many students feel inconvenienced by the long wait times. Although the inside capacity has been limited, students feel the conditions are no better.

Kayla Jarry, a junior theater major in the 4+1 teaching program, was walking around campus and noticed the line was shorter than normal. She talked about her experience at the bookstore where she spent $190 on clothes.

“I waited in the line to get into the bookstore for only 25 minutes,” Jarry said. “Inside, I waited for 45 minutes. The line was pretty much wrapped all the way around the store. It was not socially distanced at all. It was really hot in there. Everyone was sweating. It was honestly disgusting.”

Similar to Jarry, Jamie Manley, a junior film, television and media arts major, went into the bookstore twice last week and said she had similar experiences trying to spend her meal points.

The first time, she went in alone. After waiting over an hour to get into the bookstore and not having much luck, she decided to camp out one morning with her sister and wait for it to open. They arrived at 7:15 a.m. and got in around 9:30 a.m., about 30 minutes after it opened.

“The checkout line was so long,” Manley said. “I had to wait over an hour. I had to do an interview and had to leave the line. My sister had to check out for me, but by the time I finished my interview and came back to the bookstore, they were still waiting on line to check out.”

Despite the disorderly environment, Manley said she felt relieved that she was able to spend her extra meal points on quality items.

The reason why Manley and so many other students visited the bookstore multiple times was the promise of restocked items. To combat the crowds of people, employees assured buyers that new merchandise would be available for purchase throughout the week.

Like Manley, Benjamin Labadia, a junior film, television and media arts major, waited outside the bookstore before it opened. Even though he was there two hours before people could go in, there was already a developed line. He considered himself to be part of the second wave that morning.

“It was kind of chaotic, but people were being respectful,” Labadia said. “I expected a big crowd and a long line, and there was. But I think it was a good idea because they give us so many meal points to spend, and it’s ridiculous. I always have too much.”

“I think this is something we were prepared for,” Welch said. “The weeks leading up to it, we were putting everything we could out on the floor so everyone would have easy access to it. I think it was definitely more overwhelming than we anticipated.”

However, she talked about the kindness and understanding of Quinnipiac students and shoppers. Welch said one buyer even felt so bad about the busy environment that she offered to buy Welch merchandise from the store.

The bookstore is already preparing for the next week of sales and will be restocking in the following days. Students are unsure if May 1, through May 7, will be as tumultuous as the first week, but with new items coming in, many may opt to make last-minute purchases of the semester