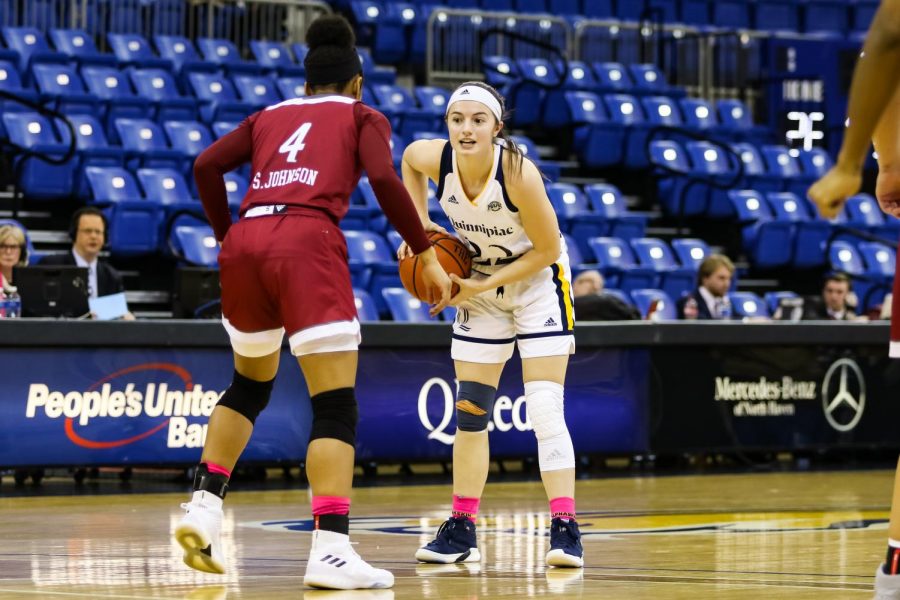 Junior guard Mackenzie DeWees was named MAAC Player of the Year in 2021.

After all of 2020-21’s beginnings, endings and COVID-19-related pauses, Sports Editor Riley Millette and Associate Sports Editor Peter Piekarski each picked one men’s and women’s athlete/coach who deserve recognition for their success.

Riley’s Women’s MVP: Mackenzie DeWees, women’s basketball Junior guard DeWees was named MAAC Player of the Year for the 2020-21 season. DeWees averaged 12.5 points per game (PPG), 7.6 rebounds per game (RPG) and led the MAAC in field goal percentage by a landslide. She ended the year shooting 48.4% from the floor, a comfortable lead over Siena’s Rayshel Brown, who shot 43.3%.

Riley’s Men’s MVP: Keith Petruzzelli, men’s ice hockey Senior goaltender Petruzzelli might as well have been an actual brick wall this year for the men’s ice hockey team. He allowed a total of 54 goals through 29 games, giving him a goals against average of 1.89. That ranked seventh throughout all of Division I. It’ll be tough for the Bobcats to find a goaltender as effective as Petruzzelli after his departure this offseason.

Peter’s Women’s MVP: Megan Szawlowski, women’s lacrosse The graduate forward lit up the score sheet this season, finding twine for 33 goals accompanied by 14 dimes for 47 points. Szawlowski’s 33 goals led the Bobcats and her 14 assists were good for second-most on the team.

Peter’s Men’s MVP: Odeen Tufto, men’s ice hockey Tufto produced career highs in assists with 39 — which ranked first in Division I — and points with 47 — which ranked second in Division I — in just 29 games. He was also recognized as a top-10 finalist for the Hobey Baker award for the best player in college hockey.

Riley’s Women’s Coach of the Year: Tricia Fabbri, women’s basketball Stop me if you’ve heard this before, but women’s basketball head coach Fabbri is really good at her job. The perennially-successful women’s basketball squad had an off-year in the 2019-20 season, only going 15-14 in the regular season before the tournament was called off due to the pandemic. But Fabbri righted the ship this year, leading the team to a 13-8 record and a No. 2 seed in the MAAC tournament. With her 26th season as the head coach in the books, Fabbri is still producing top-tier squads and leading a culture of success that doesn’t appear to be fading anytime soon.

Riley’s Men’s Coach of the Year: Eric Da Costa, men’s soccer Men’s soccer coach Da Costa fell just short of the MAAC championship title yet again this year, falling to Monmouth 1-0. In his 16th year with the program, Da Costa locked down the regular season championship, boasting the No. 1 next to Quinnipiac’s name on the tournament bracket. After losing star forward Eamon Whelan last season, Da Costa was faced with the immense challenge of training new recruits, whether it be freshman like Allen or transfers like sophomore midfielder David Bercedo, during the COVID-19 pandemic. Credit goes where credit is due to one of the university’s most talented and dedicated coaches.

Peter’s Women’s Coach of the Year: Cass Turner, women’s ice hockey Despite having seven games canceled or postponed, Turner managed her team to a winning record, including nearly defeating No. 6 Colgate in the ECAC Hockey semifinals. Turner’s team collectively outshot and outscored their opponents by a wide margin, scoring 62 goals on 663 shots and only allowing 30 goals on 361 shots. The Bobcats offense shined significantly in six of their games this season, firing 50-plus shots and scoring at least five goals in each of them.

Peter’s Men’s Coach of the Year: Rand Pecknold, men’s ice hockey During a season that was entirely in question to even begin, Pecknold managed his team to be one of the best in the country, finish first in the ECAC Hockey and make it to the regional round of the NCAA playoffs. His team finished fifth in Division I in penalty killing at 88.8%, and sixth on the power play at 24.4%. Pecknold’s Bobcat defense was locked down all season long, ranking fifth in goals against per game with 2.03 and five shutouts.

Riley’s Women’s Rookie of the Year: Rebecca Cooke, women’s soccer The freshman forward and MAAC Rookie of the Year took complete control of the attacking front for Quinnipiac, scoring four goals in seven games this year. No other Bobcat scored more than once. Cooke cranked out a whopping 26 shots, almost double what any other player on the team managed to attempt.

Riley’s Men’s Rookie of the Year: Luke Allen, men’s soccer The Bobcats ranked second in the MAAC in goals allowed per game with 1.0, second only to the Rider Broncs. There’s something to be said about Allen who came into the program in the middle of a pandemic. The freshman learned the system during a turbulent practice season in which the team was unable to be together at once and was one of the main anchors in a top-ranked defense.

Peter’s Women’s Rookie of the Year: Chloe Ka’ahanui, volleyball A pure setup specialist for the Bobcats’ volleyball team, Ka’ahanui led the team in assists with 175, and finished second with assists per set with 8.75. She also finished fifth in digs with 58 and fourth in digs per set with 2.9.

Peter’s Men’s Rookie of the Year: Ty Smilanic, men’s ice hockey After becoming the highest Bobcat draft pick ever, going No. 74 overall in the third round to the Florida Panthers, Smilanic finished the season tied for the team lead in goals with 14, sitting atop the Division I leaderboard for freshman goals. Smilanic also finished ninth overall among Division I freshmen in points with 21.

Riley’s Women’s Most Improved Player: Mikala Morris, women’s basketball Morris was an All-MAAC Rookie team selection and was a prominent part of the Bobcats’ offense, averaging 9.7 PPG. But her growth into her second year was exponential. In addition to winning MAAC Defensive Player of the Year, Morris ranked fifth in the MAAC in PPG (13.7), seventh in field goal percentage (41.3%) and her 6-foot-2 stature helped her pull in a conference-leading 10.7 RPG.

Riley’s Men’s Most Improved Player: Seth Pinkey, men’s basketball Although he transferred to Florida International this offseason, Pinkney had the opportunity this year to average 23.2 minutes per game, and he came into his own. He averaged 8.0 PPG to go with 4.9 RPG, not to mention he was second in the MAAC with 51 total blocks, averaging 2.3 per game. And in case you forgot, he’s 7-foot-1 and nailed his only three-point attempt this year.

Peter’s Women’s Most Improved Player: Kat Henselder, women’s lacrosse The sophomore goaltender has made tremendous strides to help her team compete in the MAAC. After struggling a bit as a freshman in three games, Henselder has been the starter for all 11 games this season. In those 11 starts, Henselder improved her save percentage from .273% to .448%, backed by strong showings against Canisius, Iona, Monmouth and Manhattan.

Peter’s Men’s Most Improved Player: Brage Aasen, men’s soccer The sophomore forward ramped up his production by contributing five goals, four assists and 14 points, leading the team in each category. Aasen’s shots per game improved from 1.6 to 2.8 and his shots on goal increased from .8 to 1.1. He also netted an impressive three game-winning goals in just nine games.