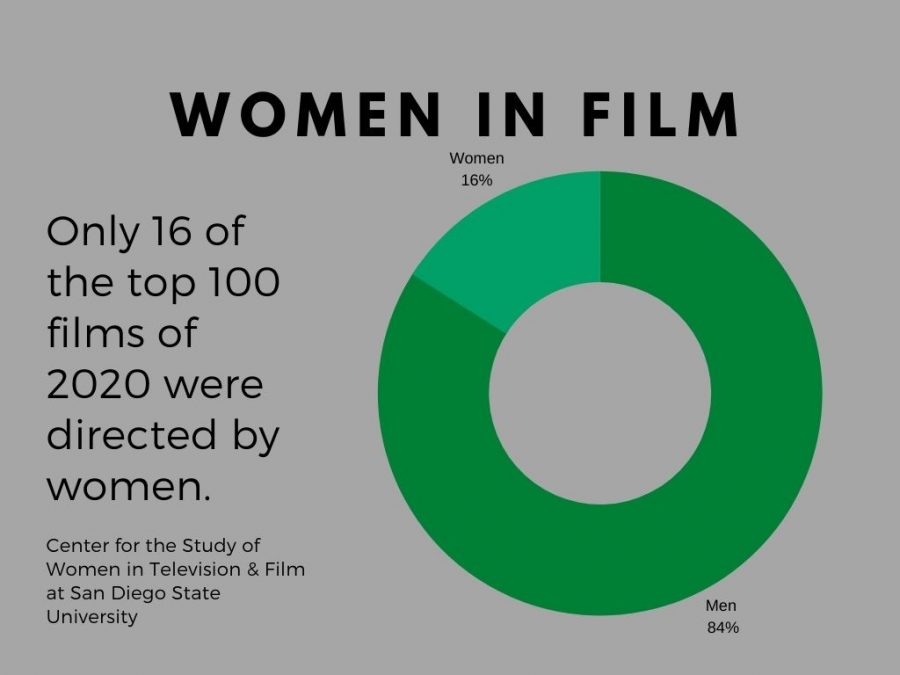 Women are underrepresented in the production of films in the United States.

Women can do anything a man can do — but better. If they had more opportunities in the film industry, maybe we would respect sequels.

The Quinnipiac Women in Film Coalition (QWFC) is a new organization on campus supporting women involved in the film industry.

Zoey Metzner, a junior film, television and media major and president of QWFC, started the organization based on a random thought in quarantine. She thinks women are in a battle with the entertainment industry, looking for equality whether it is pay, recognition or being treated like a human being.

“Why don’t we have a group with female filmmakers with everything going on in Hollywood?” Metzner said. “I can take it upon myself to put a group of women together. I grew (the club) from film majors to having other communication majors. Males also started to join. It is important for guys to help us in the organization.”

The QWFC’s mission is to produce a safe space for aspiring women filmmakers at Quinnipiac. Talya Castonguay, a junior film, television and media and media studies double major, and vice president of QWFC, explained how they want members to connect and share support for their careers.

“We want to create a place that is comfortable,” Castonguay said. “Members can feel like they can talk to us with ideas. We’re open to all ideas and anything people have to say brings to us is valued. At the end of the day, we are men and women trying to make it in this challenging industry. We want everyone to make sure their voice can be heard here.”

In a remote environment, it can be hard for students to reach out to others and share their ideas. QWFC wants to reverse that.

“This is a safe environment for discussion,” Metzner said. “You can have a classmate in this club and they will feel more comfortable talking to each if they need help. It’s getting ladies to talk to each other. It is hard with Zoom with everyone being shy. We’re trying to crack people out of their shells.”

The QWFC values networking. The media industry is a tough market especially with graduating students fighting for the same job.

“Just based off these two months starting this club, we have about 20 women at Quinnipiac with big dreams and aspirations,” Castonguay said. “There are a lot of Quinnipiac students and across the country that have big dreams. It is beneficial to work together instead of seeing each other as competition.”

Members of QWFC have different passions in the film industry whether it being editing, filming or post-production. The people in the organization make an effort to get to know each other. It is encouraged that members connect with each other on social media and support their projects.

“A two-minute project is making a name for yourself,” Metzner said. “You’re putting yourself out there. We want people to lean on each other after graduation. I believe in people being able to help each other.”

The film industry is dominated by males. Females are a minority for production jobs.

Martha Lauzen, executive director of the Center for the Study of Women in Television and Film, said women only accounted for 34% of all directors, writers, producers, executive producers, editors and cinematographers working on films. In 2020, women directors made up just 16%of the top 100 grossing films.

The QWFC emphasizes that being a woman does not restrain work ethic.

“Women are just as good as their male peers,” Metzner said. “Just because you don’t have a penis doesn’t mean you don’t deserve recognition. We need to stop doing what other people want us to do.”

Aside from networking, QWFC shares videos on empowering women filmmakers. In “What it’s like to be a woman in Hollywood,” actress Naomi McDougall Jones explains the sexism issues prominent in film.

“For the most part, it happens casually – unconsciously, even,” Jones said. “It happens because people are just trying to get along within an existing system. It happens, maybe, out of a genuine desire to teach a young woman the way that the world ‘just is.’ The problem is that unless we do something about it, that is the way the world will always be.”

Women are so much more than catering to men and being hot. The film industry needs to improve on being more inclusive to women and skewing away from normative sexism practices within the industry. “I want to see more women,” Castonguay said. “You know the industry is messed up with the rules of the Oscars being changed to have more women included. What does that say about the industry? If a giant ceremony has to make regulations to make films that aren’t about the straight male perspective.”