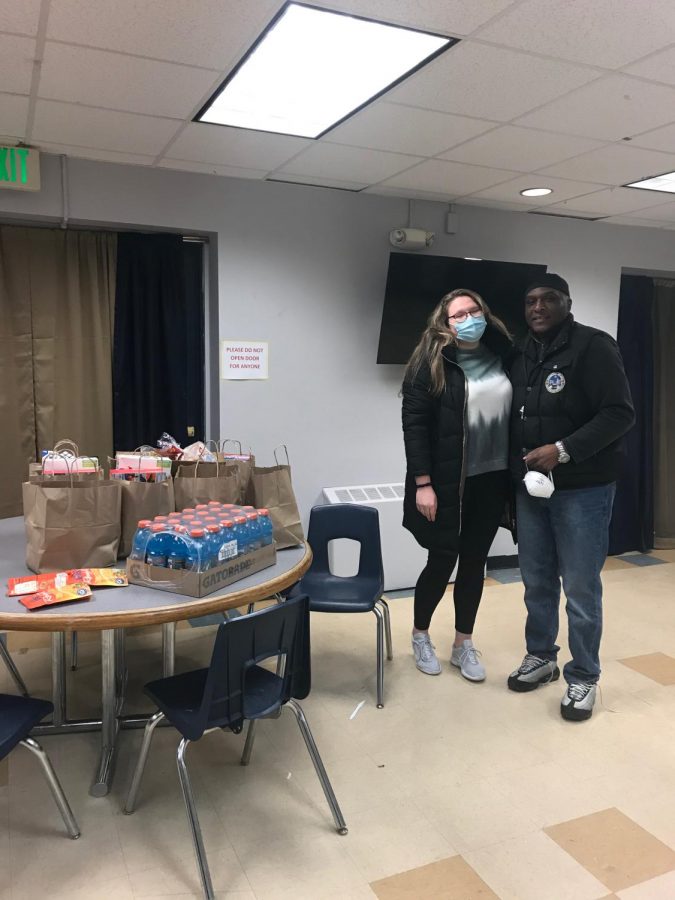 Victoria O'Toole, a student at Quinnipiac teamed up with Leonard Jahad, who works with underprivileged youth in Hamden. She used her meal points at Quinnipiac to give people in the community fresh food.

While Quinnipiac University has made it easier for students to buy more items using their excess meal points, many students are looking to donate food to charity.

Victoria O’Toole, a junior occupational therapy major, was the first person to make this happen. However, she said the Quinnipiac administration has attempted to shut down her act of charity. Administrators questioned her ability to run her capstone project and froze incoming meal points to her account.

Her idea to donate students’ meal points began in her capstone class, “Racism as a Public Health Crisis,” which is taught by Dawn Cathey, an adjunct professor in the College of Arts and Sciences. The class discusses racism in Hamden.

“Racism is a public health emergency all over the nation,” Cathey said. “And Hamden considered it one in July (2020).”

Cathey introduced this capstone topic to gauge interest from students and see if any would be inspired to make an impact in the local community. She was a police sergeant for eight years in the New Haven Police Department and understood the problem first-hand. Cathey invited Leonard Jahad, executive director of the Connecticut Violence Intervention Program, to speak to her class. The program’s mission is to target youth who may be at risk for violence and give them resources to seek a better life.

“We give unconditional care and get them to open up, and then we turn them over to a therapist,” Jahad said.

Jahad has a street team of Hamden and New Haven residents who were involved in violent situations themselves, whether it be gang-related or domestic violence. He said nearly all of them are victims or perpetrators of gun violence. Some have even served jail time for homicide, but all joined to help youth get out of the same situations they were victims of and contributed to.

Jahad told Cathey’s class about his program and stressed how many of these children need food. He said 22% of families in Hamden are hungry. The organization has a refrigerator stocked with as many fresh meals as possible, and they allow at-risk children to eat what they need and take servings home to their families so the impact is felt throughout the community.

O’Toole felt the need to help Jahad after hearing him speak to her class.

“When this guy talked, he was like, ‘The kids are just hungry. Everyone donates snacks and stuff like that, but they just want a meal. They want food,’” O’Toole said. “I just started thinking, ‘We’ve got a ton of meal plans from last fall.’ Might as well … it seems like people would be interested in donating. And then a bunch of people did donate.”

Since March 11, O’Toole has allowed students to transfer as many meal points as they want to her account. Some of her friends who opted to live off-campus donated their entire, unused meal plan money. She’s raised over $10,000 and will continue to accept points until April 23. She works directly with QU Dining and uses these points to cater meals. All donations are delivered to the Connecticut Violence Intervention Program.

When asked if he saw any direct results from O’Toole’s capstone project, Jahad’s face lit up.

“What she did was almost angelic,” Jahad said. “The volume of food that’s gone through these doors is incredible. Her SUV is packed. I got four calls Friday from families looking for food.”

O’Toole met with various members of the Quinnipiac administration about her initiative and felt unsupported and discouraged. She was intimidated and got the impression that the administration was trying to prevent the food from going out rather than providing help and guidance. O’Toole said that there were meetings about her project without her knowledge. Transactions were even frozen on her account. The administration consistently questioned the program she was working with, saying they had never heard of it.

“I thought that was kind of interesting because when I talked to dining hall workers, more than half of them knew who I was talking about,” O’Toole said. “They basically said, ‘You’re one student. You’re in a difficult program. We don’t think you’re capable. We want you to stop collecting points. We want you to keep what you have now and we want you to use that for the rest of this semester. From now on, we would like you to steer people to our meal point initiative that we’re doing through Quinnipiac.’”

At these meetings, she was told the Quinnipiac meal point initiative would only be delivering non-perishables. This was very different from her goal to deliver fresh meals. And for this reason, she didn’t believe her and the school’s visions aligned.

O’Toole said she had to go through multiple meetings with the administration to unfreeze her account. She was able to convince the administration that she should continue her work with the Connecticut Violence Intervention Program. O’Toole said the administration is now more open to the idea of students creating their own community service efforts apart from the school. A future meeting is scheduled to discuss creating more opportunities for students to get directly involved in Hamden. But still, O’Toole is upset about how much pushback there was in the beginning.

“I was just so frustrated at one point, almost defeated,” O’Toole said. “The fact that I’m having so many problems only makes me want to work harder for it. Because it shouldn’t have to be this hard to do a good thing on campus.”

Vincent Contrucci, director of community service, said that this was not his intent at all.

“I met with Victoria to see what her process was,” Contrucci said. “It was more of a check-in.”

He works directly with Quinnipiac University to run “Tap Out Hunger,” which allows students to donate a maximum of $250 meal points from their overall plan. Students are able to donate at any cashier in the dining hall. At the end of the drive, the various charities can select what they want to order. Contrucci hopes to raise $75,000.

Contrucci said the charities can order bulk meals from QU Dining or choose single-serve — it’s all up to the recipients. These organizations include Columbus House in New Haven, Master’s Manna in Wallingford and the Hamden Food Bank.

Another food drive will run during finals week. There will be blue bins stationed in residential halls during the last week of school to collect non-perishables. It will be equally distributed to five local non-profits.

However, Jahad and the Connecticut Violence Intervention Program enjoy working directly with O’Toole and the students. He grew up in Hamden and has lived here all his life.

“Quinnipiac never really had a foot in the community,” Jahad said.

He voiced his frustration with the administration, and while he understands they have many rules to work with, he has seen O’Toole’s kind personality and spirit in person.

“How can you judge the heart of someone being charitable?” Jahad said.

He hopes that after she graduates, her kind deed will inspire others to directly help CT Violence Intervention Program and others like it.

“This is what Jesus did,” Jahad said. “Jesus fed people.”