‘If you heard it here, it’s All Facts:’ Andrew and Aaron Robinson are covering sports their own way 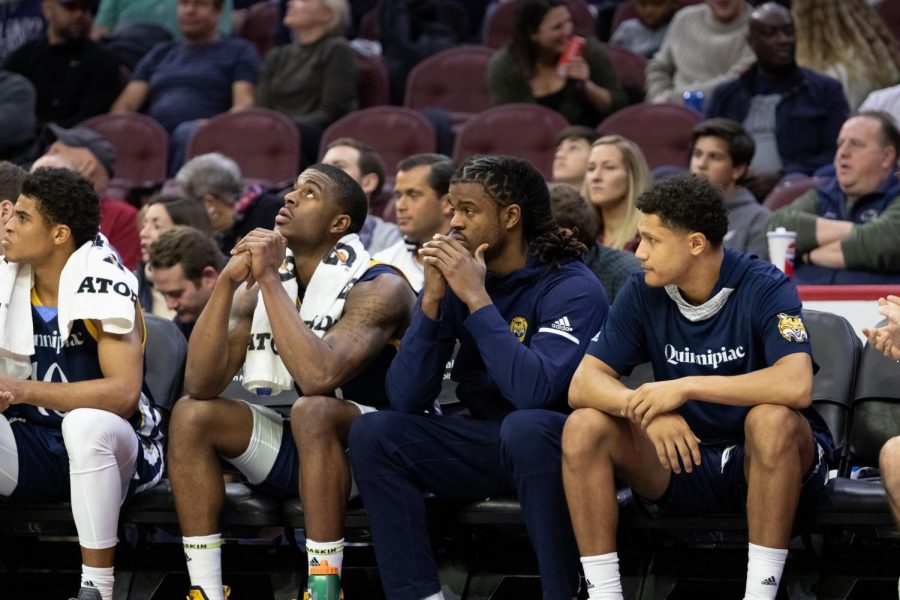 When it comes to preparing for your future career, experience can be the best teacher.

Quinnipiac University prepared Aaron and Andrew Robinson, who graduated in 2019, before they went to Coppin State University. They gained valuable experience from being in an environment where you could make mistakes on camera and get constructive criticism from experienced journalists.

“I think me and Drew have been blessed to be able to kind of do everything in life together,” Aaron Robinson said. “We got to grow up playing on the same AAU team and going to all the same schools. We didn’t know if we were going to go to college together. It was always a goal of ours, but then we went to Quinnipiac together. Then when we left Quinnipiac, we ended up going to the same school for our fifth year and then we started this together. So I think it’s just a blessing when you can do anything in your life with your twin brother.”

The Robinson twins played basketball at Quinnipiac University for four years. They were involved with student media due to their passion for writing and covering sports. But, after transferring to Coppin State in Maryland, the brothers did not have that luxury.

“It was a great situation and school, but they didn’t have a communications program, so we wanted to figure out a way that we could keep our skills sharp and stay close to sports,” Andrew Robinson said.

There weren’t any student media outlets at Coppin State, so it was all about the Robinson brothers adjusting to the environment in order to keep their journalism skills sharp.

“When I was involved at Quinnipiac, I was already involved in Q30 (TV), and I was the beat reporter my senior year,” Aaron Robinson said. “I had the opportunity to do (shows like) Sports Paws, Bobcat Breakdown and filming games. When I transferred to Coppin State for my last year of eligibility, there was no newspaper, no Q30, no radio. There was no equipment closet where we could rent a camera out and go film a game.”

Since the Robinson brothers did not have a plethora of student media options at Coppin State, they started their own company, All Facts Media, in which they covered Coppin State athletics. Their resources were limited, so they could only use their cell phones to film highlights to then post on social media.

The brothers started the company just to keep busy and stay close to the game, but it blossomed into something that they did not expect — a connection with the college basketball world.

They credit their former Quinnipiac teammates Rich Kelly and Kevin Marfo for allowing them to break the news as to where the two would transfer to. This gave All Facts Media the momentum to expand.

“Our former teammates Rich Kelly and Kevin Marfo were in the transfer portal, and they allowed us to cover their recruitment,” Aaron Robinson said. “At the time last year, they were probably two of the biggest grad transfers in the country last year, with Kevin, who led the country in rebounding and averaged a double-double. And Rich averaging like 16 points a game his junior year at Quinnipiac. So, both of those guys were probably top-20 grad transfers.”

Along with that, the brothers were successful at landing an interview with Florida State head coach Leonard Hamilton thanks to their brother Billy Edelin.

Edelin was the reason why Andrew Robinson started playing basketball and wore No. 14.

Networking has been valuable in helping Robinsons company thrive. They were also able to interview Boston University men’s basketball head coach Joe Jones. He coached Dalen Cuff, who now works for the ACC Network. Through Jones, Aaron Robinson has been able to connect with Cuff, who he talks to on a regular basis.

Their dream has always been having their own show at ESPN, so starting this company has given them an opportunity to create content together. It has allowed them to develop their skills and voice together.

Aaron said he enjoys having his own company because of the freedom they have in making content they want to put out.

“I think having our own company is a plus because of the fact that we can control what content we put out,” Aaron Robinson said. “We can write any story we want and talk about anything on our podcast.”

Along with that, the Quinnipiac community has played an important role in growing their company. Aaron Robinson talks to about 30 Quinnipiac alumni, asking them how he can improve the company. He also praised associate professor of journalism Molly Yanity for giving him constructive criticism for their site’s first story.

“Molly was my capstone advisor my senior year, and she mentally helped me that year with becoming a better writer,” Aaron Robinson said. “I’ll never forget my first story I wrote for the All Facts website. I sent it to her to edit because she used to edit my stuff as a teacher at Quinnipiac, and she ripped it apart. Only Molly Yanity would do that, and I appreciate her because nobody’s going to give you the real, and you need it to improve.”

However, Yanity is not the only professor who helped Aaron Robinson at Quinnipiac. He is appreciative of associate professor of journalism Rich Hanley for helping him along the way.

“He’s probably edited 10-15 stories that I’ve written up this year and has given me feedback,” Aaron Robinson said. “And I remember my first job interview that I had early this year, and I talked to Rich Hanley for over an hour. He was helping me prepare for the job interview, things that they might ask and ways I can answer certain questions.”

Hanley complimented the Robinsons’ initiative and said that their endeavor is exactly what the industry needs.

“Aaron and Andrew hold a deep understanding of basketball and media from their athletic and academic experiences,” Hanley said. “The name of their venture All Facts shows that they are in the information and insight business, and that approach is refreshing amid a glut of hot-take nonsense in sports media. That’s why they attract top players and coaches to interview.”

Aaron Robinson also had high praise for former Quinnipiac student and former Q30 sports director M.J. Baird. Baird is now a weekend sports anchor and reporter at KFDX and Texoma’s Fox. When Aaron Robinson was making his first highlight reel last year, he talked to Baird, and Baird gave him tips on how he makes his own reel. Aaron Robinson said he is thankful for the Quinnipiac community because it is a major reason for why he has been successful.

“I think those people in the Quinnipiac community have been so good to me over the years, so I will always be appreciative of the time that I spent there and people that I met and the relationships I made,” Aaron Robinson said. “I think that’s a big reason why I have been successful because I have a lot of good examples to follow and a lot of good mentors to help me improve along the way.”

When it has come to getting players and coaches on their website, the brothers haven’t had much difficulty because they are former players and know what it’s like to to be on the other side of the locker room.

“For us, I think people can relate and trust because we know what’s like to be a player and be on the other side of the microphone and had to answer a question,” Andrew Robinson said.

Playing college basketball was critical in growing the Robinsons’ company. It has allowed Andrew Robinson to find people to interview for their podcast, “The Auto Bid.” For example, Merrimack College men’s basketball head coach Joe Gallo came on the podcast and talked about watching him hoop and offering him a scholarship to the school.

In addition to playing, it’s been helpful that coaches and players recognize the brothers. Aaron Robinson emphasized that coaches remembering facing them has helped them encourage guests to come on to their podcast.

“The biggest thing college basketball has done is get guys in the pod,”Aaron Robinson said. “I remember last week when we’re interviewing (George Mason men’s basketball head coach) Kim English and he was like, ‘Where do I know you guys from? I’ve seen you guys before,’ and I was like, ‘Yeah man, cause we played against you guys when you coached at Colorado.”

Both the brothers stressed that for their company to be successful, they have to be selfless and not have an ego. Former Quinnipiac men’s basketball head coach Tom Moore said neither Robinson brother has an ego and is impressed they stepped out of their comfort zone by covering less popular sports.

“If guys had egos, they could say, ‘yeah man I’m not making the drive down there to watch George Mason versus Fordham,’ who was at the bottom of the A-10 this year,” Andrew Robinson said. “But at the end of the day, that grind that you put in now is going to pay off 5-10 years from now.”

The Robinson brothers hope to continue to have success with their company going forward as they accept any challenge that comes their way, and enjoy every moment of it.

“The seriousness-of-purpose that accompanied their studies at Quinnipiac is evident in their present media work, but that seriousness is balanced by the sense of joy that accompanies everything they do,” Hanley said. “The audience gets that, and their guests get that. It’s a rare combination that will carry Aaron and Andrew far in their writing, podcasting and other media work.”