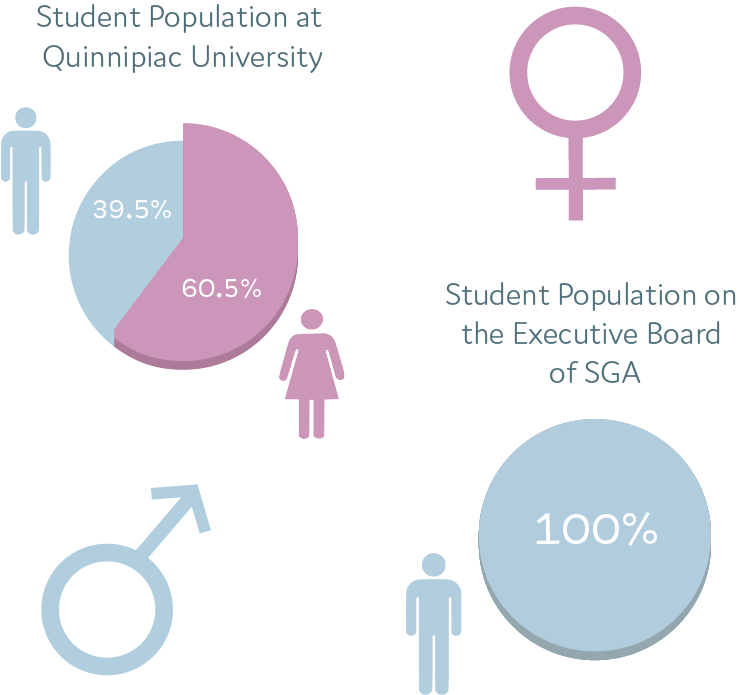 Quinnipiac University’s undergraduate student body is over 60% female, but the group of five students leading the executive board of the Student Government Association (SGA) are all male. Of the 2,052 students who voted, 72.08% were women.

Additionally, all five of the executive board members are white. Quinnipiac is 75% white. The majority of the students who voted, 81.92%, were white.

“One thing about student government is we can’t really control who gets elected,” said Caroline Mello, a junior entry-level masters physician assistant major, who ran and lost the campaign for student body president. “I honestly believe the women campaigned just as hard. It must have just been who the students wanted.”

Even if some of the women had won, the executive board would have been entirely white.

Mello lost to Nick Ciampanelli, current vice president for student experience and junior political science and economics major. Ciampanelli said that the turnout for the election was low — 2,050 students. This accounts for only about 29% of the student body.

Bobbi Dynice, a junior occupational therapy major and unsuccessful candidate for vice president, said this campaign and the turnout exemplified the fact that many students are not aware of the SGA and its efforts.

“Students don’t know about SGA and don’t know what’s going on,” Dynice said. “Many of the students I talked to did not know any of the initiatives that were worked on in the past year. A lot of them didn’t know the structure of SGA … The number of students who vote that don’t know anything about the candidates is slightly concerning.”

In the past, Ciampanelli has seen high female participation in surveys and other elections when compared to men. For example, a survey that went out about recreation garnered 336 responses, 259 of which were female, 73 males and four non-binary/non-gender conforming students. Likewise, this election was dominated by female voters but still led to male victories.

“There definitely is a level of sexism and patriarchy that comes into play here,” Ciampanelli said. “Something that is very common in social studies is that we often see men in positions of power rather than women.”

Research from the Institute for Policy Research at Northwestern University confirmed Ciampanelli’s assessment.

“Women who want to be leaders, therefore, run into two problems,” the study read. “The first is the ‘double standard:’ A female candidate for a powerful role has to put her agentic side on display to reassure people that she can take charge, which is hardly ever an issue for men. The second is the ‘double bind:’ When women in leadership roles do act tough, there is a backlash against them for being too tough.”

The United States House of Representatives is 27.4% women and the U.S. Senate is 24% women. There has never been a female president of the United States and Vice President Kamala Harris is the first female vice president.

Mello said that on the campaign trail she felt as though sexism did play a role in the loss, even if it was unintentional.

“There were times I was like ‘OK I can’t campaign in the pink suit,’” Mello said. “I had to wear a more powerful color. I am also a 5’1’’ female. If I was standing behind a podium I don’t necessarily look as powerful as a 6’1’’ male. People want someone who has that confidence level that males traditionally get. I had to think about how I could counteract that stigma because it is present.”

Mello, and the other women who lost their races, affirmed that the men who won are all qualified for the position. Karenna Downs, who ran for vice president for public relations, said despite the loss, she knows the executive board will continue to listen to her ideas.

“I am always making sure my opinions are being heard,” said Downs, a sophomore nursing major. “I will not be afraid to vocalize my opinions to them when I don’t think they are going smoothly or there are some things we can advocate for for our underrepresented students.”

Both Downs and Mello will serve on the general board as senators for their respective classes.

The males on top are not reflective of the board as a whole. The general board is primarily female. Including the executive board, Ciampanelli said there are 10 men on SGA, plus three non-senator judicial members. There are 21 women plus the chief justice.

Jeremy Gustafson, who won the race for vice president for inclusion, diversity and engagement, a new position, said he has been having conversations with other executive board members about ways to include these voices.

“The motto I am going with for everyone no matter race, ethnicity or gender is to actively listen to everyone and actively reach out to people to set up meetings to talk about ways to make sure everyone feels included,” said Gustafson, a junior political science and economics major.

Next week, Gustafson will meet with multicultural student leaders on campus to get a handle on the issues facing the university when it comes to inclusivity. Many of these leaders are women. He said that he received endorsements from several female-led organizations such as Leading Women of Tomorrow and hopes he can put in the work to make their voices heard.

“I want to meet with administrators and see what is possible and holding them accountable for their actions and for their words they have stated in the past to make sure they are following through on stuff,” Gustafson said.

In the past two years, the SGA has prided itself on a diverse executive board. Sophia Marshall, senior entry-level physician assistant major current study body president, said that while all five men are great fits for their positions, this election felt like a step backward.

“We have been making really great strides on our executive board,” said Marshall, a senior entry-level masters physician assistant major. “The first year I was on executive board we had two gay individuals, two people of color and a straight white man. This past year we had four women and one male. Seeing that five white male executive board? It really poses a unique challenge for them.”

Austin Calvo, the student body president for the 2019-20 school year, led a diverse executive board in his time holding the position. He endorsed Mello for president this year.

“I worked more closely with Caroline during my time on SGA, and I just know she is a workhorse and she really went above and beyond with campaigning,” Calvo said.

Nonetheless, Calvo said Ciampanelli is a great candidate because of his prior experience as vice president for student experience. This position allowed him to interact with many student organizations and get a pulse on the needs of the community. He said he wished the executive board was more diverse but is hopeful it will succeed.

“It’s not the greatest look,” Calvo said. “It’s about what they actually do with it that will determine how the year will go.”

Marshall said she knows the five white men already met and spoke about how they will be able to represent people with experiences they cannot relate to. She ultimately said that this executive board will be successful because they are qualified and because the student body chose them.

“The student body does have the final say on things,” Marshall said. “I do worry about the image that this has, but we can’t argue with the way the student body votes.”