The side effects of staying safe: how the QU community has weathered the COVID-19 vaccine 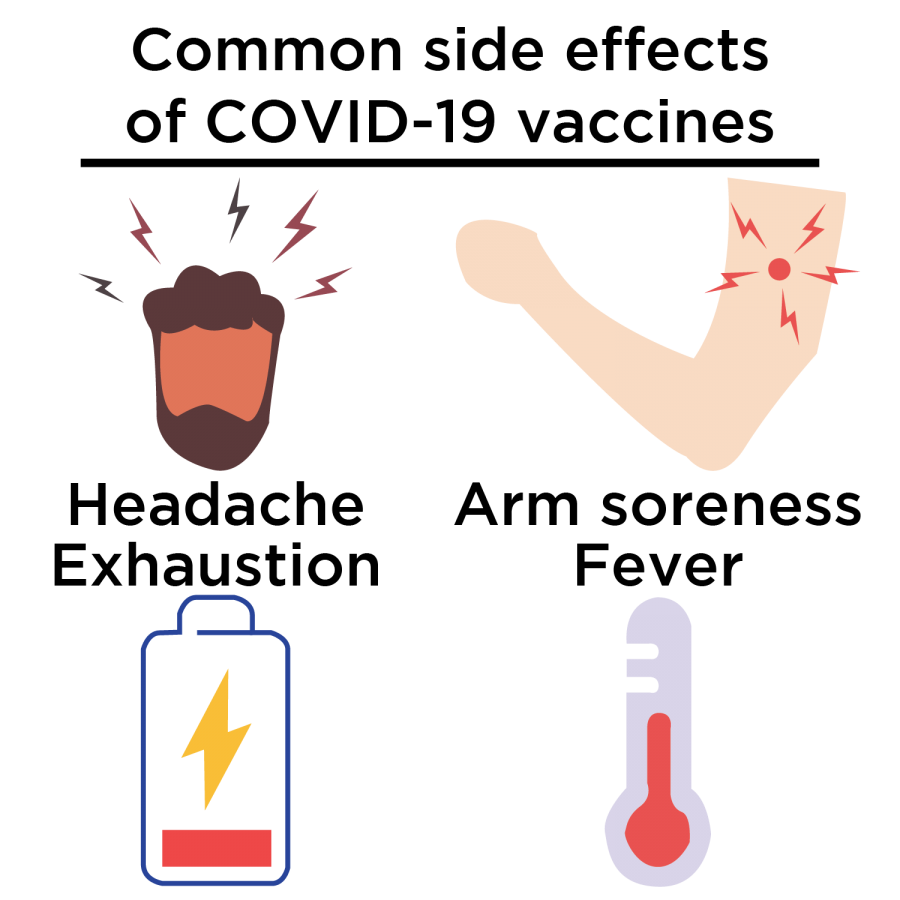 Quinnipiac University students became eligible for the COVID-19 vaccination in Connecticut on April 5, and have since been receiving their doses, which cause varying physical side effects.

The university encouraged students to register for their vaccinations while living on campus and they can obtain the Moderna, Pfizer or Johnson & Johnson vaccines. The CDC recommended pausing the use of Johnson & Johnson on April 13, after six instances of blood clots. Connecticut followed suit, canceling or postponing all Johnson & Johnson appointments. Depending on the individual, their post-vaccination symptoms and reactions may be contingent on the vaccine they receive.

“These vaccines do have side effects, even though these side effects are mostly local,” said Dr. David Hill, senior medical advisor. “Maybe a sore arm, some swelling, discomfort or the next step feeling fatigued or feverish for a day or so. But beyond that, there really isn’t much.”

Hill said that although students might withhold from getting vaccinated due to their own personal fears or rumored stories from COVID-19 vaccinations, it is important to validate those feelings while also locating trusted information and sources to fully educate oneself on all aspects of the vaccine.

“So much about vaccine hesitancy is (a) lack of reliable information, trusted information,” Hill said. “It’s one thing to kind of look at the facts on a piece of paper, and it’s another thing to have someone you trust to talk that through.”

Rebecca Perez, a junior nursing major, became fully vaccinated with the Moderna vaccine in February and said she has always been a firm believer in trusting science and vaccines.

“About six hours after receiving the first shot, I felt tired and my arm was very sore,” Perez said. “That night before bed, I had the chills but never had a fever. These symptoms last for about 48 hours, and I took Tylenol to help with the symptoms.”

Perez said she was eligible for the vaccine in December through the university’s School of Nursing program and was not given the choice of which vaccine brand she would receive. She was able to use Connecticut’s Vaccine Administration Management System (VAMS) to book her appointments but found herself facing side effects both times.

“(After) the second dose I felt very tired and achy as well,” Perez said. “I felt very sore and didn’t want to get out of bed, but again, never had a fever. I took Tylenol again to help. My symptoms were the same as the first dose, however, they were more intense and heightened.”

Meanwhile, other students who received the Pfizer vaccine reported having fewer side effects. Senior nursing major Julia Orlofski said she experienced a minimal reaction after getting both shots earlier this semester.

On the contrary, junior political science and international double major Ohidiani Imevbore said she received one shot of the Johnson & Johnson vaccine, and she had extreme side effects.

“I was very sick, I had chills and a really bad headache as well as very weak,” Imevbore said. “I had a slight fever and was very lethargic.”

Despite enduring some physical side effects post-vaccination, Imevbore said she was eager to receive her dosage to become fully vaccinated.

“I didn’t really have a choice as that was the only vaccine available on that day, and I wanted to get it as soon as possible,” Imevbore said.

With more individuals receiving their COVID-19 vaccination, some students feel there should be more discussions within the university’s community regarding the side effects that come with it.

The university plans to hold informative forums for students about vaccination side effects in addition to previous five forums that have already been held regarding vaccines, Hill said.

Students are urged to schedule their COVID-19 vaccination appointment through Connecticut’s VAMS, a local pharmacy, medical provider or by calling the vaccine appointment assist line at 877-918-2224.