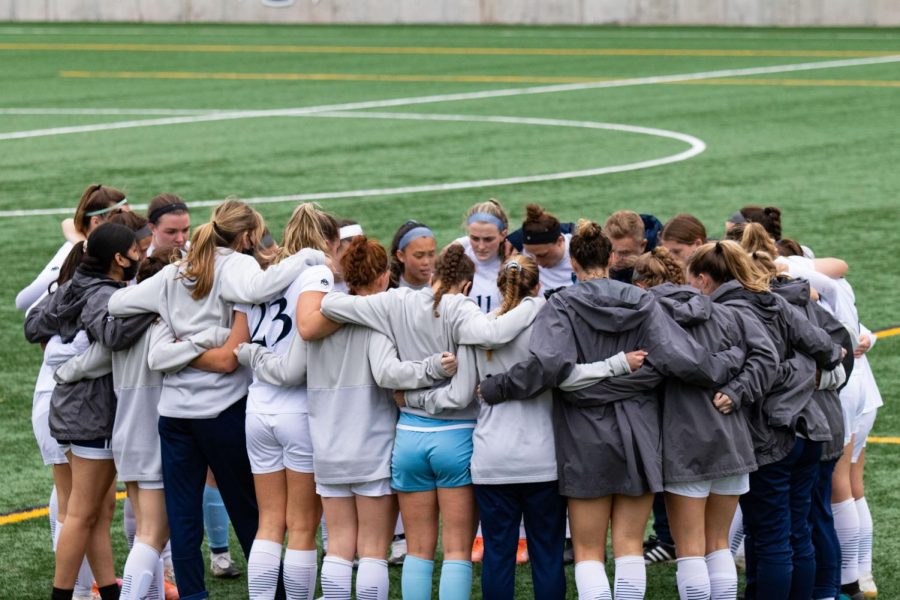 The Quinnipiac women's soccer team had only three shots on target, while Monmouth had 10.

The Quinnipiac women’s soccer team’s season came to an end at the hands of Monmouth.

All good things must come to an end, and for the Bobcats on Monday, they left it all on the pitch. However, it was not enough to hold off the Monmouth Hawks, who advanced to the MAAC championship game with a 2-0 victory.

One could feel the tension in the stadium as this match was physical and fast-paced with few scoring chances. In the first half, Monmouth had the two best chances, taking two long shots from the edge of the 18-yard box that freshman goalkeeper Sofia Lospinoso saved.

The second half kicked off with similar intensity as the first half. Monmouth broke the deadlock in the 47th minute, when junior forward Lauren Karabin got the ball on the right side of the edge of the 18-yard line. The forward cut in and curled a rocket right into the top-left corner giving the Hawks a 1-0 lead. Clarke was dissatisfied with the way Monmouth opened the scoring.

“The first one was disappointing in the manner in which we conceded and where it came from, but these things happen and you got to adjust and react in the game,” Clarke said.

The Hawks’ defense looked like a brick wall, with the Bobcats looking threatening only through set-pieces. This was due to strong individual performances from the Hawks’ backline, especially senior defender Sarina Jones who was poised with everything the Bobcats threw her way.

Being down a goal, the Bobcats kept persevering and produced their best chance of the game through a corner kick. The Hawks struggled to clear the ball, and it fell to sophomore midfielder Fleur Cordier whose shot rattled off the crossbar and went out for a goal kick.

In the dying minutes of the match, the Bobcats fought hard and pushed their players up in search of a crucial equalizer. This, however, was the cause of their demise as the Hawks took advantage of the space the Bobcats left behind and sprung together a lethal counter-attack that ended with sophomore midfielder Alexa Correa slotting the ball into Quinnipiac’s bottom-left corner.

This means the end of the season for the Bobcats, who finished with a record of 5-2-1. Though the team made it to the MAAC semifinals, Clarke was disappointed with his team’s play in the last two final-four games.

“That’s two semifinals in a row where we haven’t really played well … we got to solve that,” Clarke said. “At the end of the day, I think the two best teams are us and Monmouth, and we’re going to be back at it again in the fall.”

With the season coming to an end, it also means the end of the seniors’ time on the field. Despite this, Quinnipiac remains in good shape, only losing one starter in senior defender Hannah Reiter. This has Clarke optimistic for next season.

“Obviously we lose Hannah, we do have a couple of good center-backs coming in that hopefully slot in at the back, but it is still a relatively young team,” Clarke said.

In spite of having one of the toughest schedules in the MAAC, the Bobcats were able to stay well over .500 and were 90 minutes away from the MAAC championship. This season may have ended in heartbreak, but the Bobcats will use this experience as motivation for next season.