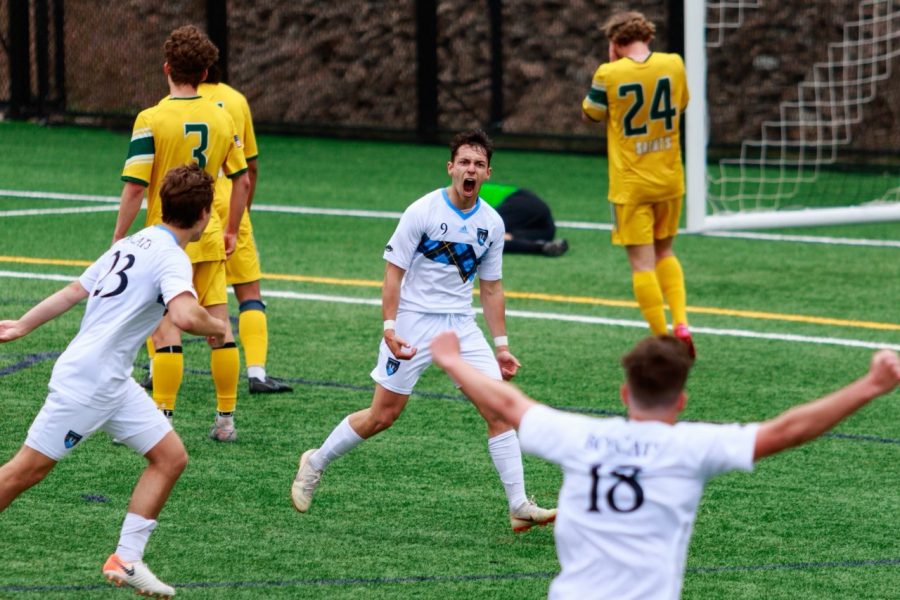 Sophomore defender Domen Bozic scored the game-winning goal in the 78th minute of Quinnipiac's quarterfinal victory over Siena on Sunday.

The No. 1 Quinnipiac Bobcats beat the No. 8 Siena Saints 1-0 in the MAAC quarterfinals on Sunday, April 11, thanks to a 78th minute goal by sophomore forward David Bercedo.

It took a while to get on the stat sheet, as neither team recorded a shot through the first nine minutes. Sloppy passes led to counters for both teams that resulted in even sloppier finishing in the final third. Siena pressured well in the first 15 minutes of the game, causing several errant Quinnipiac passes. The Bobcats recovered for the remainder of the half, controlling possession.

Once sophomore forward Brage Aasen moved to the middle of the field, there was a noticeable improvement in possession. Initially, Aasen was playing left wing and switched to right wing around 15 minutes. While finishing the half in the middle, there were less long balls and more intermediate passes that built up to crosses from the flank.

“(I) saw a really professional performance from them,” Quinnipiac men’s soccer head coach Eric Da Costa said. “Siena came out and pressed really high and attacked really high in the first half. We had to be brave across that backline and strong and reliable.”

Siena thrived on counters and free kicks, thanks to Quinnipiac’s struggles with fouls in the first half. Quinnipiac had six fouls while Siena had four. Bercedo and junior midfielder Dejan Duric both received yellow cards before the first half ended, as did Siena freshman forward Bilal Hersi and sophomore defender Mark Sojer.

Those free kicks didn’t challenge either goalkeeper, and neither did any shot in the first half. Sophomore defender Henry Weigand found himself on the other end of two crosses by Aasen, but junior goalkeeper Greg Monroe handled it with ease. Quinnipiac had 10 corners in the game compared to Siena’s three.

Monroe was the best player for the Saints, which shouldn’t surprise anyone after he ranked third in the MAAC in saves (30).

Quinnipiac was a different team in the second half. It consistently pressured Siena into off-target passes. The Bobcats dominated possession — freshman goalkeeper Antreas Hadjigavriel only had to make two saves — and kept the ball on Siena’s half for the vast majority of the second half.

Bercedo led the charge as the high forward, forcing Siena defenders to play long rather than keep possession. After transferring from Ohio Valley University following the 2019 season, his efforts during Quinnipiac’s 6-1 season have not gone unnoticed by Da Costa.

“(Bercedo) saw an opportunity to continue to compete and to continue to feed his competitive desire,” Da Costa said. “And as you can see, when the kid plays, it’s who he is. I couldn’t imagine him not playing — his head would probably explode — but he’s exactly everything that we thought he would be and more.”

The noticeable change in tempo can be partially attributed to a halftime substitution in which Da Costa swapped junior midfielder Oriac Villa Rotxes for senior midfielder Simon Hilinger, who made the most of his minutes. He ripped a shot off from just inside the box, which Monroe made an athletic effort to push it aside. Hillinger’s pressure later forced a turnover that led to a shot by Aasen that narrowly went over the crossbar.

Despite the dominance Quinnipiac wielded in the second half, the Bobcats failed to finish their first 21 shots, eight of which were on target. Quinnipiac may have doubled its shots from the first half (8) to the second (16), but it couldn’t find the back of the net.

“It’s one of the only sports where you can dominate the ball, dominate possession, create a ton of chances and walk away losing the game 1-0,” Da Costa said. “We knew the reality of that.”

Turns out 22 was the lucky number.

Sophomore defender Domen Bozic stepped up from his right wingback position and dribbled around two Siena players before finding Bercedo’s feet. A quick turn and chip by the Madrid native left Monroe watching the ball float over his outstretched hand in the 78th minute.

Bozic → Bercedo gives us the advantage in the 78th minute! 1-0 lead in Hamden 🙌 pic.twitter.com/kotqnWz2VL

Quinnipiac continued to push in the final 12 minutes. Hilinger made a run before finding Bercedo who put another shot on target, forcing Monroe to punch the ball over the crossbar.

A last-ditch attempt by Siena saw tempers flare as the Saints attempted a corner with seconds left on the clock. Monroe made the trip to the Bobcats’ 18-yard box for the cross and was the center of some pushing and shoving after the final whistle.

Quinnipiac hosts the No. 5 Fairfield Stags in the MAAC semifinals on Wednesday, April 14, at 3 p.m.