Quinnipiac comes out on top in the MAAC quarterfinal against Fairfield 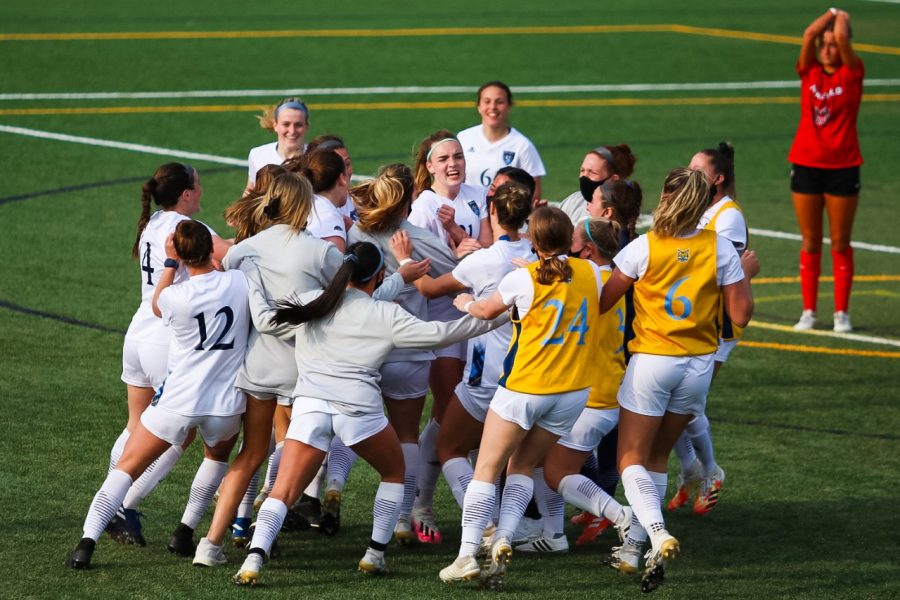 Freshman forward Rebecca Cooke scored the game-winning goal against Fairfield in double overtime in the MAAC quarterfinal on Friday.

The No. 2 Quinnipiac Bobcats defeated the No. 7 Fairfield Stags in the quarterfinals of the MAAC tournament on Friday, April 9, with a golden goal from freshman forward Rebecca Cooke in the second period of extra time.

In a rematch of the last regular-season game, Quinnipiac was able to once again beat Fairfield 1-0 in Hamden.

The Bobcats played in a 4-3-3 formation with a high striker and three midfielders in a rotating triangle, allowing different runs and more fluidity throughout the game.

Quinnipiac started out strong in the first 10 minutes of the game, controlling almost all possession. As the game progressed, Fairfield was able to make the plays to even out the game. Though it remained scoreless after 45 minutes, Quinnipiac outnumbered Fairfield 4-3 in shots on target.

Both teams started off slow in the second half. Neither team created scoring opportunities, and teams held possession of the ball when they had their chance. There were a few promising runs from both sides, but each resulted in offsides or turnover via poor passes.

Around the 65th minute, the Bobcats began to exhibit a new form of energy and much better gameplay.

“Today we made substitutions that I didn’t want to make for the game, but I did it for the fitness factor and fatigue factor,” Clarke said. “We made substitutions at the right time to keep it fresh, and I think in the end it started to wear (Fairfield) down.”

As the game began to pick up again, both sides started making better chances and taking advantage of the little time left in the game.

A series of saves from freshman goalkeeper Sofia Lospinoso in the 78th minute kept the Bobcats in the game and brought more life to the team.

At this point, both teams were relying on the long ball in hopes of beating out the defenders to get that game-winning goal. However, neither team was successful.

Fans at the stadium roared throughout regulation, but their wish for a goal didn’t come true.

A draw after 90 minutes meant the teams played an extra 10-minute half with the first goal, called a golden goal, deciding the winner. If no goal is scored in two extra-time 10-minute halves, the game is decided in penalty kicks.

Quinnipiac continued to control possession and showed the most energy in the first half of extra time. It forced Fairfield to expend all its energy on defense and relied on clearances and fouls to slow the Bobcats down.

“Late in the second half and mostly in overtime (Fairfield) spent most of the time backtracking,” Clarke said. “That’s where the gaps started to open up because (junior midfielder Selena Salas) and (sophomore midfielder Markela Bejleri) started sliding balls into the gap.”

Unfortunately for the Bobcats, that goal they pushed so hard for didn’t come in the first 10-minute period.

However, just as the game seemed to be going to penalties, senior forward Kelsey Goldring placed a through ball which led to a Bobcat breakaway. From there, Cooke beat a defender and the goalkeeper and netted the game-winning goal.

This kind of chance was familiar for Cooke. In her last game on April 6, against Fairfield, she had an opportunity to score on a breakaway, but the goalkeeper made the save.

“I’ve said (to Cooke in practice), ‘I’ve seen you go around the keeper,’” Clarke said. “Make them have to come out. If they make contact, you go down and give the referee a decision to make. But if you get past her, you’re walking the ball into an empty net.’”

Cooke took Clarke’s advice to a tee, changing her footwork in order to go around the goalkeeper and easily slide the ball into the back of the net. Cooke learned from her coach and won Quinnipiac the game.

The Bobcats will play in the MAAC semifinals on Monday, April 12, at 3 p.m. at home against No. 3 Monmouth, who beat No. 6 Niagara 1-0 earlier Friday.