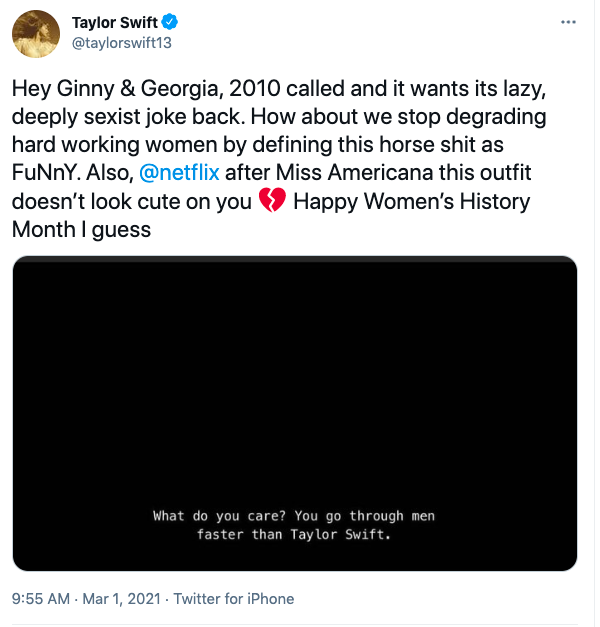 Taylor Swift fired at Netflix for referencing her dating life in 'Ginny and Georgia.'

Netflix has continuously released hit original shows, one of the latest being the popular drama, “Ginny & Georgia,” which came out on Feb. 24.

An eccentric mother, Georgia Miller (Brianne Howey), and her two children, Ginny (Antonia Gentry) and Austin (Diesel La Torraca), leave their old home in the South for Wellsbury, Massachusetts, seeking a fresh start. However, this picturesque family isn’t as perfect as it seems.

Many have compared “Ginny & Georgia” to the hit TV show, “Gilmore Girls,” which originally aired on The CW in 2002 and ran for seven seasons. It also received a miniseries by Netflix, “Gilmore Girls: A Year In The Life.” The two shows are placed under the same genre, “dramedy.” Although, if viewers start watching “Ginny & Georgia” with the expectations of a Lorelei and Rory dynamic, they will be very surprised.

Ginny is a 15-year-old biracial girl trying to discover her identity at her new school while her mother, Georgia, is trying to escape her dark past and give her children a normal life. The two have an interesting connection. In some episodes, they seem like sisters, but in others, Georgia puts her foot down and acts like a mother. Their mother-sister relationship is very different from Lorelei and Rory. Ginny is anxious. Her character feels as if she is the parent of the house, constantly watching over her little brother, Austin, as Georgia becomes invested in her romantic relationships and new career.

Throughout the show, I rooted for both women and even though I became a bit irritated toward Ginny and what she says, it is important to keep in mind the realism behind Ginny’s portrayal. She is forced to move to a new home, discovering secrets within her family and denies any similarities between her and her mother. Gentry pulls off Ginny’s character so well, creating a vulnerable feeling when the audience watches her constantly question Georgia’s actions and intentions.

“Ginny & Georgia” offers a lot of genres and subplots for everyone to enjoy. It touches upon some romance, comedy, drama and even some psychological elements from Georgia’s mysterious past. This show explores a lot of relevant issues such as mental health, self-harm, body dysmorphia and racism. At times, these themes can be intense and triggering so watch with caution.

Overall, “Ginny & Georgia” is relatable and while everyone is isolating and social distancing, the show will give a taste of the social life we have been missing.

As of now, the show has not been renewed for a second season, but it quickly rose to No. 1 on Netflix’s top 10 most- watched list.

While instantly becoming a show loved by many, Netflix and the producers have faced some heat on Twitter due to their sexist comments regarding American singer-songwriter, Taylor Swift.

In episode 10, Ginny and Georgia are in the middle of having a heated argument about relationships.

“What do you care? You go faster through men than Taylor Swift.” Ginny said.

Swift publicly responded on Twitter a few days after the show was released on March 1.

“Hey Ginny & Georgia, 2010 called and it wants its lazy, deeply sexist joke back,” Swift tweeted. “How about we stop degrading hard-working women by defining this as funny. Also, Netflix after Miss Americana this outfit doesn’t look cute on you. Happy Women’s History Month I guess.”

Many fans agreed with Swift as belittling other women for their mistakes or pasts only fuels the issue of women putting down other women. Netflix has taken jabs at her before in another Netflix original, “Degrassi: Next Class,” when an actress mentions how Swift has made a career off all her exes.