When a racist painting imitates a racist reality 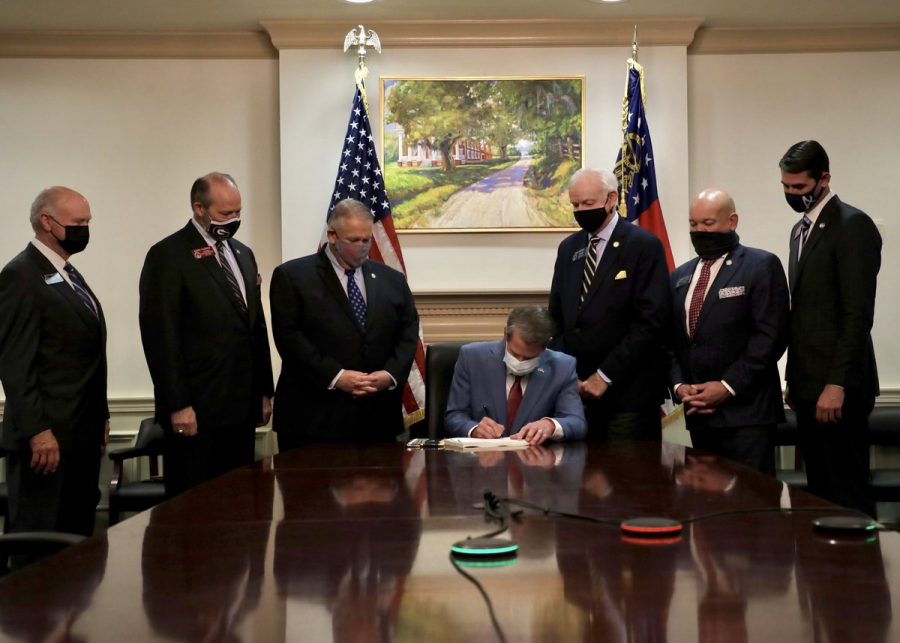 Georgia Gov. Brian Kemp signs a bill targeting minority voters in front of a painting of a plantation that held slaves.

On March 25, Georgia Gov. Brian Kemp signed a 95-page bill that will heavily suppress the vote of millions of Georgians — especially Black voters. Right behind Kemp was a painting of the Callaway Plantation in Georgia, which formerly housed slaves.

Former Georgia gubernatorial candidate Stacey Abrams called the bill “nothing less than Jim Crow 2.0,” and it’s hard to disagree considering that African Americans will have many more roadblocks in the way of performing their civic duty with the passing of this bill. The painting in the background just reinforces that message.

Here’s a few ways Kemp and his cronies are trying to circumvent the Constitution by feeding into former President Donald Trump’s lie that the 2020 elections were stolen.

In the past year, it has been clear other forms of voting promote voter turnout. In a time when many people were worried about in-person voting amid the COVID-19 pandemic, Georgia increased its turnout rate from 52.5% in 2016 to 61.6% in 2020.

Now though, Kemp is trying to make the once-convenient method of dropping off your ballot more difficult. Georgia will be moving curbside drop-off locations inside early voting locations and will be removing several locations around the state.

Elderly and disabled voters are the targets of this part of the bill, as it will vastly hurt those who can’t travel that far to drop off an envelope. For two groups that have experienced so much grief and heartache throughout this grueling pandemic, the least Georgia can do is let them vote.

To many people, this might seem like a no-brainer. Of course people would believe that voters should show identification when they arrive at the polls — there have been many claims of voter fraud by Trump and Republicans in the past five years.

The truth is that there is no evidence of widespread voter fraud in states that don’t require strict identification, and the idea of requiring voter ID is a new concept. Prior to 2002, nobody had to show photo ID in the polls, and ballot tampering was not deemed an issue.

Georgia’s bill will force absentee voters to show identification, which can be a major hassle for many people. It can drive people away from voting due to the unnecessary steps needed.

Republicans have been pushing for stricter voter ID laws because it heavily discriminates against minorities, who tend to vote for Democrats. They are less likely to have the kinds of identification required by these states in order to vote, and that’s not by accident.

In 2016, North Carolina tried passing stricter voter ID measurements, which were later shot down by the United States District Court because it targeted the specific forms of identification that Black voters were more likely to use and banned them with “almost surgical precision.”

These laws are pitched as fixing a non-existent problem, creating more burdens on the voter before they can submit their ballot.

It’s no secret that some lines for voting are incredibly long, especially when there are only a few voting places for millions of voters to cram into. Georgia was especially notorious, as some voters in Atlanta had to wait upward of five hours before they could check a box.

People handed out water bottles and food to those who had to wait so long, especially to the elderly and disabled.

Well, now those conditions are going to be even worse, as the state is making it a misdemeanor to provide water or food to anyone waiting in line to vote. That means if you hand someone a water bottle after several hours in Georgia weather, you will face a bigger punishment than if you brought a gun with you.

Coupled with a ban on mobile voting units where volunteers drove bus-loads of people who couldn’t drive to the polls, this bill is a direct assault on the rights of voters.

Republicans and Kemp aren’t hiding their discrimination at this point. They got scared that the voices of Georgia are speaking up after they elected two Democrats to the Senate last year. Voters showed that when people get to the polls, Republican power will quickly fall, and this bill is Kemp’s last-ditch effort to maintain decades of discrimination.

However, these efforts by Republicans to try to suppress voters shouldn’t discourage people from being civically engaged. If we give up now, then that means Kemp will get what he wants, and discrimination will continue to thrive.

Get out to the polls, make your voice heard and kick these racists out of government.