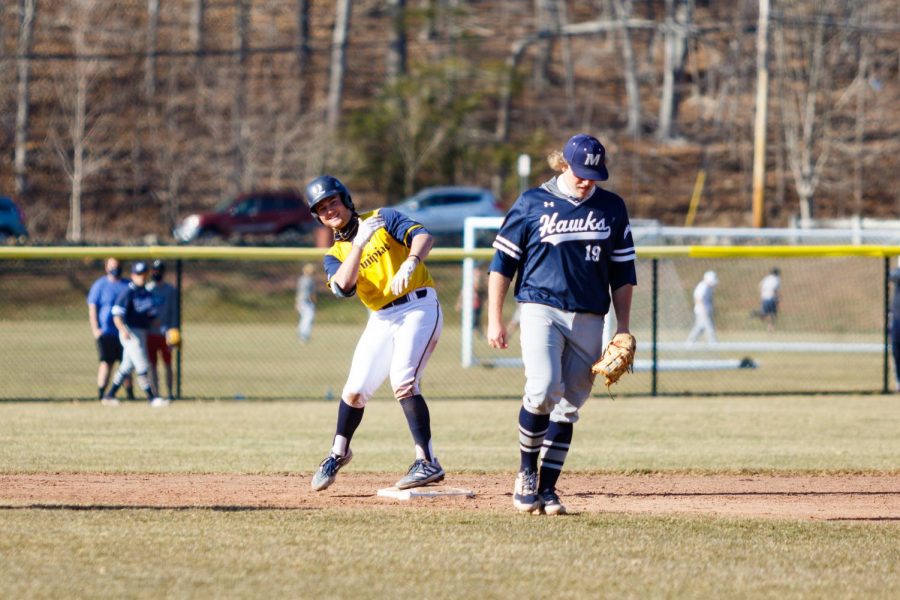 On a cloudless March 20, with students and family members in attendance, the Quinnipiac baseball team (2-6 overall, 2-6 MAAC) stepped on its home field for the first time in 671 days — a welcome return. It played the Monmouth Hawks (3-1 overall, 3-1 MAAC). The Bobcats also traveled to Lawrenceville, New Jersey, this past weekend to face the Rider Broncs (6-2 overall, 6-2 MAAC).

The Bobcats lost three out of four games in both series. On the surface, one may think that’s not the start to the season this team wanted. Luckily, success is not only surface level. While the team showcased some poor trends, there were some good aspects, too.

The Bobcats displayed their strengths more than their weaknesses in their season opener on Saturday. They defeated the Hawks 5-0, and a Bobcat who really benefited from that first game was sophomore pitcher Brandyn Garcia.

In his freshman year, the southpaw appeared in four games, making one start. In those four games, he finished with a 5.40 earned run average (ERA), allowed seven hits and six earned runs and struck out five batters in 10 innings pitched. The most innings Garcia had pitched in his career was three, but on Saturday, he doubled his career total.

It’s only been two starts, but Garcia is trending upward. He could be the Bobcats No. 1 starting pitcher down the line.

In the season opener, two familiar faces brought the offense’s punch once again. The first is graduate student outfielder Andre Marrero, who, in the season opener, hit an important insurance run batted in (RBI) single in the bottom of the fifth inning. Marrero finished the game going 1-2, with a walk and two RBIs.

The other is graduate student third baseman/outfielder Evan Vulgamore. It was a scoreless game, until Vulgamore launched a home run over the left field fence to make it 3-0 in the bottom of the fourth. He finished the game batting 2 for 3 with three RBIs and a run scored.

A bigger story, though, has been graduate student infielder Dylan Lutz’s play.

The Colorado native leads his team in batting average (.431), hits (11) and is tied for second in RBIs (6). Marrero leads the Bobcats with seven RBIs.

The opening two weekends saw a combination of experience and how that translates to offensive production. If the bats continue like this, expect to see high run totals moving forward.

Overpowered by offense and shut down by pitching

The season opener and the final game of the Rider series are the only wins the Bobcats have this season.

Both series displayed that potent opposing offensive production can overpower the Bobcats’ offense. An example of this was the Hawks 8-5 win in the second game of the March 20, double-header.

Hawks sophomore utility player Harry Padden went 4 for 6 from the plate, including two triples. Padden also had three RBIs and a run scored.

The peak of Rider’s offensive explosion came in the third game of the series, as graduate student outfielder Kyle Johnson went 3 for 4 from the plate, with a double, home run and four RBIs.

The other aspect the Bobcats struggled with was steady pitching. They faced Broncs graduate student pitcher Peter Soporowski, who leads the MAAC in strikeouts (17) and is second in ERA (0.60). The New Jersey right-hander pitched a complete game, allowing seven hits, one run and striking out eight batters.

Additionally, the Bobcats’ offense had trouble producing against Monmouth fifth-year pitcher Regan Dombrowski. The righty pitched four innings of relief, recording one strikeout while allowing no runs, no walks and two hits.

Entering the season, Donnelly was one of the Bobcats’ candidates to fill the vacant closer role, which was previously held by former pitcher Andrew Workman. In his first appearance this season, he pitched one inning, allowed three hits, three earned runs and two walks.

Bullpen woes continued into the Rider series as well.

While the Bobcats will probably have to do a closer-by-committee scenario, it’s also important for them to have those in-between pitching pieces step up.

Play to the final out

An important quality for the Bobcats is that they showed life in the final game against Rider. Down 5-2, the Bobcats didn’t allow a run between the fourth and ninth inning. They won the game 8-5.

Sometimes, teams get so defeated by the deficit they choose to quit or save their fight for a different day. Not this team.

It also happened against the Hawks. The Bobcats were down 10-4 in the bottom of the eighth. A Vulgamore solo shot and senior catcher Colton Bender two-run homer later cut the deficit to 11-7.

It’s small, but it can make a sizable impact if and when the Bobcats offense faces this situation again.

The recipe to success seems simple, but it’s all about the Bobcats sticking to their identity: a powerful offense. And when it’s clicking, everything else falls into place.