Quinnipiac to continue weekly testing throughout the spring 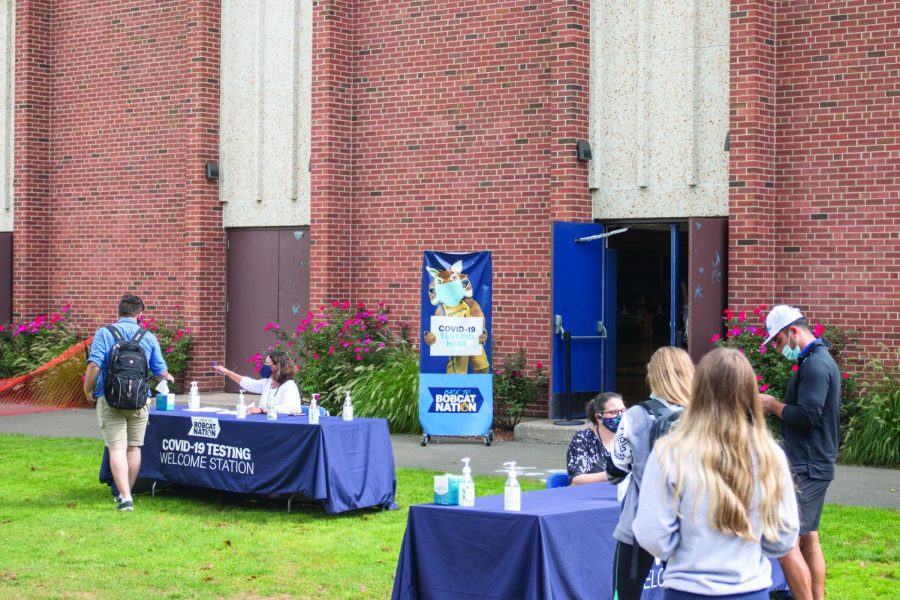 All undergraduate students will be tested weekly throughout the spring.

In efforts to continue monitoring COVID-19 cases on campus, Quinnipiac University announced that weekly testing for all undergraduate students will last until the end of the semester on May 7.

“I think this sends a message to students that this is important and that we’re all a part of a community,” said Dr. David Hill, senior medical adviser for the COVID-19 task force. “In doing our part to maintain COVID-19, we have to show up on a weekly basis to be tested.”

Hill said the idea to extend weekly testing spawned from a recent letter signed by students and parents, asking the COVID-19 task force to continue it throughout April by emphasizing the value in doing so for the Quinnipiac community.

“It’s not only coming from us as a task force, but it’s also coming from a portion of the student body,” Hill said. “It also does give us that picture weekly of how many cases.”

Testing will remain on the Monday and Wednesday schedule of each week, with exception to the week of April 5, in which testing will be held on Wednesday, April 7, and Thursday, April 8, following Easter weekend. Hill said the same previous standards and disciplinary consequences will continue during the extended testing. Students will also remain exempt from paying for additional tests.

However, 15% of graduate students are continuing to be tested weekly. These students are not prone to be at high risk to the university, Hill said.

In response to the added schedule of testing on campus, some students are relieved with the university’s continued weekly testing.

“Honestly, the weekly testing makes me feel a lot more safe, so I have no problem with it continuing for the rest of the semester,” said Ava Coppola, a sophomore health science major. “I like having a piece of mind knowing that I know my results each week and that others do too.”

Having relaxed some of its restrictions and guidelines on campus, the university has remained at a “green alert level” with the highest positivity rate being 1.2% as of publication.

“It seems like the school has been able to manage a potential outbreak a lot easier with increased testing,” Coppola said. “They are able to detect a positive case faster so that there is less of a chance of it spreading.”

Despite Quinnipiac’s plan to return to full on-campus instruction for the upcoming fall semester, there are still preparations in the works regarding regulations that the university will put in place.

Hill said an important discussion regarding the vaccine has been focused on making it an incentive-based decision among the Quinnipiac community. In addition, Hill said there will be similar COVID-19 policies set in place on campus.

“There will be some testing in the fall and how we do that is determined by the percentage of students that get vaccinated,” Hill said. “It’s likely that we will not have to test those students who have been vaccinated.”

Some students have already made up their minds regarding vaccination but question how that decision from other members of Quinnipiac’s population will come into play for next semester.

Brooks said that he feels ongoing testing ensures that the university can handle the situation to its fullest capability in the future.

“No testing method will be perfect but right now what we have is much better than random-testing and it is a pretty non-invasive way of testing people,” Brooks said.“While a negative test doesn’t eliminate the possibility of exposure or infection, it is a good way of filtering out those who are definitely infected.”