As the Quinnipiac men’s basketball practice comes to a close, you may see one coach off to the side shooting free throws with the ball boys and fooling around with some of the guys on the team. Other days he will be entertaining the team by standing on the concourse behind the seats in the gym and making one-handed shots from 50 feet out.

This man is assistant coach Scott Burrell, a basketball legend in Connecticut. University of Connecticut fans remember him as part of the team that returned UConn to the national stage in college basketball in the early ‘90s. Others know him as a member of the 1998 Chicago Bulls championship team.

“I was a little skeptical at first to bring him in because a lot of former players don’t realize how much work there is that goes into being a college assistant (coach),” head coach Tom Moore said. “But his qualities, his personality, his charisma and his basketball knowledge is off the charts. I wanted to try and educate him about how much work there is and if he was up to that, and my hunch was that he was ready.” 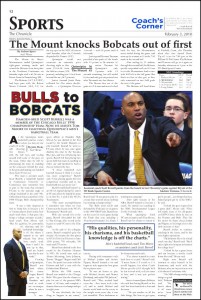 Coming to Quinnipiac, Burrell was back where his career began. Burrell grew up in Hamden and used to work out on-campus when he was a teenager.

A two-sport athlete at Hamden High School, he was drafted in the first round by the Seattle Mariners to play baseball. Instead he went to UConn, where he was once again drafted, this time by the Toronto Blue Jays, and was still playing two sports. Burrell felt that playing two sports held him back in excelling in either one and decided he had to choose between the two.

“I chose basketball over baseball because I think it is more fun, more competitive,” Burrell said. “I was playing against the best competition everyday and to me [basketball] was just more fun.”

Burrell established himself as an NCAA legend during his career at UConn, where he helped his team to its first No. 1 seed in the NCAA Tournament.

“The main accomplishment I remember was when we beat Clemson at the buzzer in the NCAA Tournament,” Burrell said.

With one second left in the game, Burrell inbounded the ball to Tate George, who scored at the buzzer to send UConn to the Elite Eight.

At the end of his collegiate career, Burrell compiled quite the résumé. He became the first player in NCAA Division I history to have 1,500 points, 750 rebounds, 300 steals and 275 assists.

Burrell was drafted in the first round by the Charlotte Hornets in 1993. He joined stars such as Alonzo Mourning, Larry Johnson, Tyrone “Muggsy” Bogues and Dell Curry. He spent four years with the Hornets and half a year with the Golden State Warriors.

Before the 1998 season, Burrell was traded to the Chicago Bulls. This gave him the chance to play for one of the greatest NBA teams of all time, and complete a dynasty that won six championships in eight years.

“It was absolutely the best thing to happen in my career,” Burrell said. “It was great to play for a team that worried about nothing but winning a championship.”

The Bulls went 62-20 and defeated the Utah Jazz in six games in the 1998 NBA Finals. Burrell was on the court for every game during the Finals that year, including a 10-point performance in a Game 3 victory.
Playing with teammates such as Michael Jordan and Scottie Pippen, Burrell learned a lot and began to truly appreciate how great those players were.

“It was an honor to play with Michael, Scottie and Dennis [Rodman], and under Phil Jackson,” Burrell said. “They worked hard every day – they never took a day off, and to watch Michael and Scottie work hard on the court, in the weight room every day, it was just incredible. Their dedication to winning was amazing.”

After eight seasons in the NBA, Burrell wanted to become a coach. He started out coaching in the NBA Developmental League for the Colorado 14ers.

When Quinnipiac hired UConn assistant coach Tom Moore, Burrell saw his chance to return to his hometown and coach.

“I’ve always wanted to come back here to coach,” Burrell said. “I never knew if I could or if it would happen, but when Coach Moore got the job I thought he’d be fun to work with, so I just came in here and it was just perfect timing.”

Senior forward James Feldeine also said that having Burrell on the staff has been beneficial to him and the team.

“He just teaches us all the little things, like how to get open, get by people…just things that have helped people get by in the NBA,” he said.

“I think the guys respect him a great deal,” Moore said. “They will watch some of his old games on ESPN Classic when he was on the Hornets and Bulls. They like the stories he shares about Jordan and Pippen, so he brings a lot to the table in terms of that.”

Burrell wishes to continue coaching in the future, and he has  even higher aspirations.

“I’d definitely like to be a head coach one day,” Burrell said. “But I enjoy right now being an assistant at the college level.”

“I think he has a great future and can become a terrific coach down the road,” Moore said.

Right now Burrell will continue to enjoy himself in his hometown and work with the Bobcats, who are in position to win a Northeast Conference title.

“His NBA championship ring brings us good luck,” Feldeine said. “He hasn’t taken it off since we’ve been winning.”