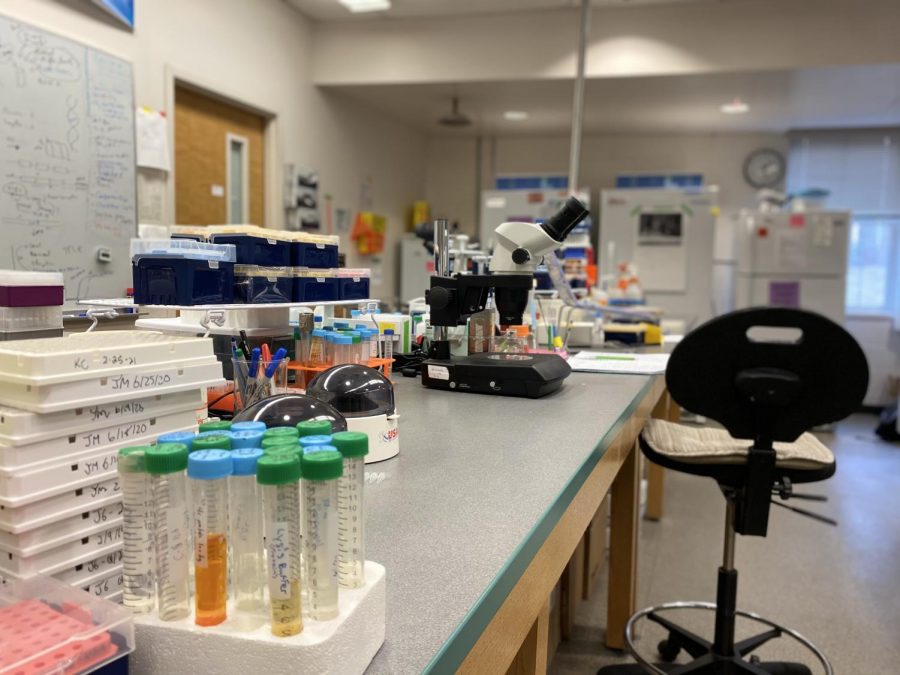 COVID-19 shut down labs which made it challenging for professors to conduct research.

COVID-19 has changed the way Quinnipiac University researchers conduct their studies, complete their projects and communicate with others.

Dennis Richardson, professor of biology, had to continue his research on the biogeography of leeches while still teaching in the classroom.

“The financial pressure that COVID caused in research, we don’t have the funding we had before,” Richardson said. “In addition, we are teaching more so there is less time to do more research and for a while we were completely shut down we couldn’t even get into the labs which makes it very difficult.”

The lab was shut down for some time, so Richardson and his colleagues struggled with how to replace lab time with frequent Zoom calls.

“I would say because of the time we were completely down, it’s probably reduced our effectiveness by a good 50%,” Richardson said. “But like I said we never completely stopped, we just kept it going forward.”

These challenges never stopped Richardson and his colleagues from obtaining necessary information.

“I think that is one of the benefits we have of everything being electronic now, we’ve never stopped having access to everything and our library has done an excellent job of making sure everything’s still running so we can get access to the papers that we need for our research,” Richardson said.

Although there has been less in-person communication, there are resources available to finish research, even if it does require more time. With the new skills developed from online communication, researchers can use it to learn and prepare for the future.

“I had a project planned that would involve quite a bit of travel, and obviously that was not possible so really that was the next phase of a project we are working on with studying the biogeography of leeches,” Richardson said.

Richardson had already submitted a grant proposal for internal funding, but he was not able to access it because of the lack of revenue sources for research. Travel also became nearly impossible, which changed the course of his research.

“I’ve been impressed watching my colleagues here at Quinnipiac how nimble they have been and how well everyone has adjusted,” Richardson said.

In addition to being inspired, Richardson said he commends the administration and his colleagues for their ongoing support during this new time of research.

“It is a game of trying to put a bunch of Band-Aids over a wound,” Prasad said.

Although more people are using online sources to conduct research, historians still need to have access to research libraries. Prasad included how it is unsustainable long term to not be able to use essential materials.

“My major project was put on the back burner, it ultimately took a lot longer to complete,” Prasad said.

Prasad has to try to complete her book project manuscript while teaching a research seminar to undergraduate history majors.

“I had to become a little more creative in fashioning research projects,” Prasad said.

Although her research has not stopped, she has had to become more innovative in constructing her projects. She said getting to conferences and feedback on research may be easier, but it is harder to access information.

The new era of research has spilled into the classroom. The way students and professors find information has become more online based than before.

“There is a knock on effect in the classroom,” Prasad said.