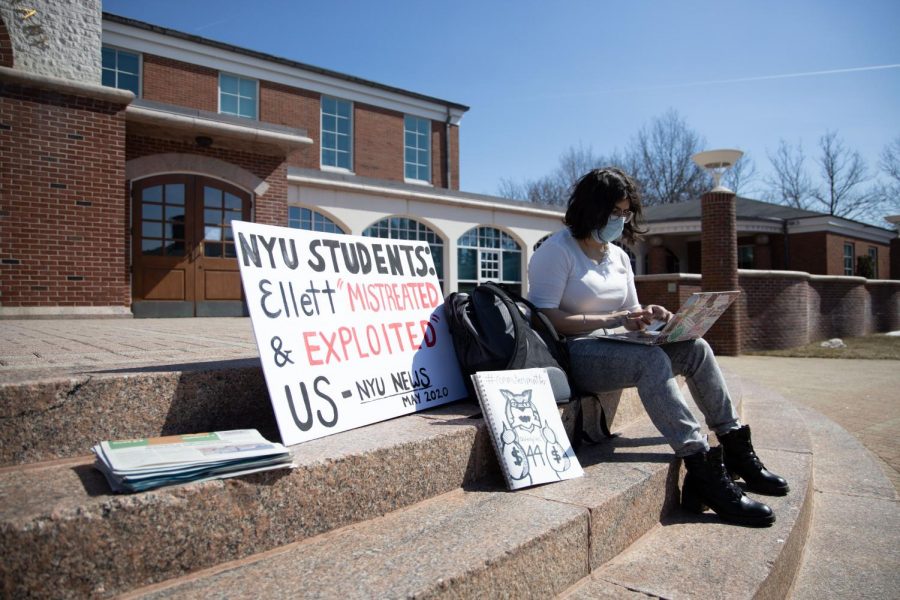 Quinnipiac University students organized a protest against the $90 per semester fee for next semester.

A group of students gathered on the Arnold Bernhard Library steps to protest the $90 per semester fee, which is set to be implemented in the fall 2021 semester. The demonstration comes after growing dissent of the Feb. 25 decision, including a petition to revoke the fee that has amassed more than 1,100 signatures to date.

“We think that (the fee is) very unfair, especially since a lot of the students who are commuters are (of) lower socio-economic class,” Tran said.

Tran hoped the protest would gain attention from prospective students and families who were touring campus Wednesday.

“When they visit here, they see the good side of Quinnipiac, but I also want to share more of the truth of what is going on,” Tran said.

“He is kind of the face behind this policy so we are trying to call him out,” Tran said.

Gabriella Colello, a junior political science and law in society double major and protest co-organizer, said the poster was important to highlight that the protesters, like NYU’s students, also feel mistreated.

“There’s really a lot on (Ellett’s) lack of transparency that we’re seeing here at Quinnipiac and commuters are also feeling mistreated and exploited,” Colello said. “I just want to pull up the continuities between the institutions and say that we’re not happy either.”

By calling Ellett out, Colello says she hopes he will revoke or modify the parking fee policy.

“If he’s not willing to revoke it, if commuters are going to be given a parking fee, then they need to be given preferential parking or guaranteed parking spots,” Colello said.

Ellett responded to a letter from Colello and other students on Feb. 28, saying he welcomes student feedback and is personally committed to exploring ideas and suggestions, but he did not indicate whether the fee would be reconsidered.

This protest was the first of many, Tran and Colello said.

“We’re out here today to keep on the administration because I think that they’re kind of waiting for us to fizzle out or to stop pushing this issue, but we want to make it known that we are not going to back down,” Colello said.

Both Tran and Collelo said protests will continue until action is taken regarding their demands for the fee.

As a response to calls to revoke the fee, members of Quinnipiac’s Student Government Association (SGA) sent out an email on March 8, asking students for their opinion on payment alternatives.

Tran said that the SGA is already aware of commuters’ thoughts as she and others recently attended an SGA town hall to discuss the policy.

“I don’t get why (SGA) put (the survey) out because I thought they already knew the answer,” Tran said.

“I think that SGA is taking the correct steps,” Colello said. “I hope to see some more action from them soon.”

“At a time when COVID-19 is putting a financial strain on a lot of people, it is even more unfair, I feel, to put (the fee) on commuter students, who are already choosing to live off campus because this school is so difficult to afford in the first place,” Arends said. “As a residential student, I found that very frustrating.”

Regarding whether residential students should also be charged to park on campus, Arends said it is a “tricky issue.”

“I just don’t think it’s fair to charge $90 a semester,” Arends said. “People will say it’s fair because if you break it down it’s a dollar-something a day, but commuter students aren’t parking here every day. And to that extent, I think it’s fair for residential students to pay more because we will have our cars on campus every day, whereas commuter students don’t. I don’t want to pay a fee, but I think that’s the most fair option.”

Arends said she hopes other residential students will join in protesting against the fee because it affects the student community as a whole.

“Especially in COVID-19, where it’s already hard for commuter students to make connections with residential students, we should be coming together to help elevate this issue,” Arends said.

Colello also encouraged other students to get involved in the protests, but acknowledged it can be nerve-racking.

“It’s okay to be nervous … but it’s also okay to stand up for what you believe in,” Colello said.