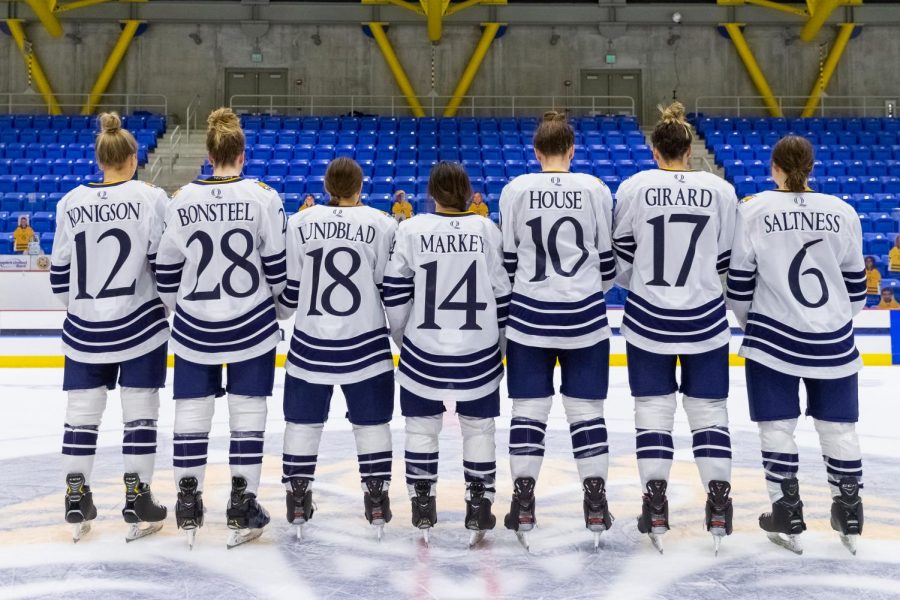 The Quinnipiac women's ice hockey seniors (all pictured above) saw their season end on Friday.

The Colgate Raiders defeated the Quinnipiac women’s ice hockey team 2-1 to advance to the ECAC Hockey championship game. The Raiders outshot the Bobcats 26-17 and dominated the faceoff battle, 35-21.

The game got off to a slow start with both teams playing cautiously and disciplined. There were not a lot of shots on net throughout the first 15 minutes, with the Raiders leading the Bobcats 7-3 in shots with five minutes remaining in the opening frame.

Sophomore forward Kaitlyn O’Donohoe scored the first goal for the Raiders. Freshman forward Kalty Kaltounkova found O’Donohoe on a fancy feed from the high slot to the back door behind Quinnipiac junior goaltender Logan Angers.

In the second period, there wasn’t much scoring but there were a lot of opportunities. Both teams had multiple chances on the power-play, but neither converted.

Quinnipiac failed to make the most of its second power-play of the period. This led to Colgate sophomore forward Sammy Smigliani coming hard out of the penalty box to receive a pass from junior forward Noemi Neubauerova and put her team up 2-0 with about two minutes left in the second period.

The third period was more of the same with the Raiders winning faceoffs consistently and outshooting Quinnipiac once again, but despite that, the Bobcats didn’t show any sign of quitting.

After sophomore defender Alexa Hoskin took a hooking penalty, the Bobcats killed it and got a goal of their own with just 45 seconds left. Senior forward Taylor House put in a strong wrist shot to give the Bobcats a chance at the comeback.

The late goal from Taylor House was metaphorical in a way. It defined not only this season for the Bobcats, but the senior class as a whole. The Bobcats worked through so much with cancellations due to COVID-19 and hardships throughout the season, but never gave up. Even though they came up short of their goal, this team fought until the final whistle throughout this whole season, led by that group of seniors, including House.

Nevertheless, Colgate shut the door, and will move on to the ECAC title game on Sunday, March 7 against the winner of Clarkson and St. Lawrence.