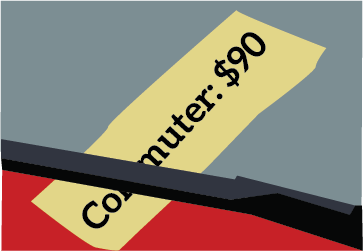 Quinnipiac University students are banding together to combat a new parking fee policy that Chief Experience Officer Tom Ellett announced via email on Feb. 25. Starting in the fall 2021 semester, undergraduate commuter and off-campus students will need to pay a $90 per semester parking fee.

In the email, Ellett wrote that this fee is to help ensure that there will be parking availability for students that choose to reside on campus as part of “a desire to encourage students to benefit from the full residential experience by living on campus.”

“However, we recognize that increasing the number of students who live in our residence halls and potentially reallocating some parking for these important facilities improvements will affect the amount of existing on-campus parking,” Ellett wrote.

Though, many students said they feel as if this policy is not taking into account financial struggles.

“I think some students might find the additional ($90 per semester) to be nominal, for others, it is gas, groceries, money for bills,” said Gabriella Colello, junior political science and law in society double major. “Many students are barely able to afford Quinnipiac as it is … Commuter students are more likely to be low income, often one mishap away from being unable to afford their education.”

Colello expressed her concerns by sending a letter to Ellett that other students signed.

“When I woke up to read that email and saw the reasoning behind this policy, I was inflamed,” Colello said. “The points brought up to justify this immediately struck me as egregious poor tax. Even for students that commute from rentals in the area — this is ridiculous. The rates of rentals in the surrounding area are still cheaper than on-campus housing. Why punish students trying to make the best financial decisions for their situations? I knew I had to say something.”

In the letter to Ellett, Colello discussed that for her and other commuter students, having to reside off campus is not a choice.

“Commuting for me and most others is not a voluntary choice, the grim reality is that despite my 4.0 GPA, maxed out transfer scholarships and various forms of student employment — I still have to take out 25k/year in loans to go here,” Colello wrote.

Joshua Gorero, a senior political science major, commutes to Quinnipiac. He said he came to this university because it seemed like a place that welcomes commuter students. However, he said over the years, his thoughts have changed and a lot of this stems from parking issues.

“I try to feel welcome as a commuter,” Gorero said. “… Parking has always been a problem that feels like it’s getting worse every single semester, every year. Parking has been important for us … They were trying to find a way to give preferential parking for residential students at the cost of commuter students losing parts of North Lot.”

Even though this is Gorero’s last semester as an undergraduate student, he signed Colello’s letter to support his sister and other younger commuter students who will be affected by this policy.

“I just wanted to raise this concern as a senior because I don’t think this is the right way to address this balance between the commuting student body and the student body that lives on campus,” Gorero said.

Madison Stout, a junior political science and applied business double major, also signed the letter. She said that most of her “anger and despair” came from the assumption that commuters should just live on campus.

“Honestly, I can’t even say this move is a privileged oversight,” Stout said. “It was definitely a decision made from a place of privilege to further profit, but definitely not an oversight. It was made knowing that the low-income students who can manage to live on campus, would most likely no longer be able to. Intentionally or not, it’s a move that is placing Quinnipiac deeper into the fiscal elite by weeding out lower-income students.”

Other students shared their concerns by signing a petition created by Daniel Passapera, a sophomore journalism major. Currently, the petition has 1,153 signatures as of day of print.

“Quinnipiac is a commuter school and it’s evident that this institution is neglecting to recognize the voices of those in financial need and those who garner the same education whether being a residential student or not,” Passapera wrote.

Naomi Gorero, a freshman undecided major and Joshua Gorero’s sister, signed and shared the petition. She said she thinks the policy change was not delivered well.

“I think the institution, especially Tom Ellett, didn’t handle it in the way that could make it appealing because when that whole thing was released, the whole email, I got texts from group chats and all that and they were really pissed off,” Naomi Gorero said. “I was really pissed off as well. I feel like he didn’t explain well enough and explain why … Now it’s a big whole mess and I hope things are handled better.”

In the email, Ellett recognized that this policy may not be welcomed by the student body, but said that it is “an important step in our efforts to create a best-in-class residential experience at Quinnipiac.”

On Feb. 28, Ellett responded to the letter written by Colello by sharing that there are ideas to improve the commuter experience such as starting a program that would create a position similar to resident assistants that will support and connect commuter students. Along with that, Ellett said he is working to see if there is a parking app that will assist students with finding parking spaces.

In the email, Ellett also admits that a big portion of what he is doing is “deepening the residential experience.”

“That is why as we developed the new three-year residency requirement (which only applies to future incoming classes beginning this fall), we determined it was the logical time to introduce the parking fee, both to give an incentive to those choosing to live on campus, and to help us cover costs associated with new residential and commuter programming we want to develop,” Ellett wrote.

In response to this letter, Colello sent Ellett another email.

“The previous response has failed to address any of our concerns, nor did it provide definitive answers to the questions we posed,” Colello wrote. “… Dr. Ellett, we have also noted that you are copying and pasting email responses to the concerned students reaching out to you. Please let it be known that this is only adding to the hurt and anger of commuter students and showing (again) how much value the university places on our feelings, opinions and experiences.”

Helen Tran, a sophomore nursing major, also commutes and said she does it because it is more cost-efficient than living in dorms. She said this $90 per semester fee defeats the purpose of why she chose to go to Quinnipiac.

Tran created a GroupMe chat with other students to stand up against this policy change and also signed the petition.

“We have a lot of supporters, so hopefully we will all work together on this and stand for what we believe in,” Tran said. “Hopefully they will revoke this new policy that they have. As a commuter, I saw the email that they want to support residential living and learning. My first initial thought is it’s not supporting my living and learning though.”

Stout said she is happy to have signed the letters to Ellett.

“As someone whose only chance at leaving the small-town, generational poverty cycle was to step into the larger, debt-driven academia poverty cycle, I don’t regret signing that letter one bit,” Stout said. “Not for myself, and not for my fellow commuters and low-income students who took that leap of faith by putting themselves into debt for that shot at creating a better life for themselves and those after them to hopefully, one day, end that poverty cycle.”

On March 1, Colello and Ellett spoke privately. In an email sent to Colello, he said that a reason behind the new three-year residency requirement starting with the class of 2025 is due to the lack of residential students this year.

“One of the other reasons for a three-year residency requirement is that with the nearly 400+ empty beds, we will use revenue to provide more financial aid,” Ellett wrote.

Ellett also admitted that this parking policy will be a change for the university community.

However, Colello said that after this discussion she feels as if this new parking policy will not be revoked despite the outrage.

“I got the impression that there wasn’t much room for change,” Colello said. “(Ellett) dismisses any possibility of inequity because there is a proposed financial appeals process. If that will operate anything like the current financial process, inequity will certainly exist.”