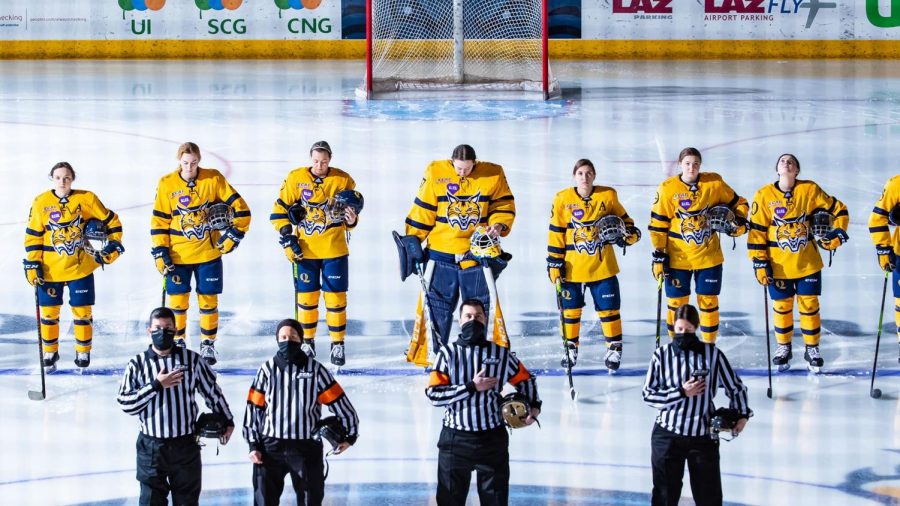 The Quinnipiac women’s ice hockey team defeated the Colgate Raiders 5-3 at the Frank Perrotti Jr. Arena on Saturday. The Bobcats avenged yesterday’s 4-2 loss to the Raiders, who were the only team on Quinnipiac’s schedule that it hadn’t beaten prior to today.

The Bobcats started scoring late in the first period with a goal from senior forward Taylor Girard 14:24 into the period. The Bobcats were aggressive all period and threatened to score twice before Girard hammered in the third rebound chance in front of the crease.

“We’ve been trying to get better every game,” Quinnipiac women’s ice hockey coach Cass Turner said. “We got some big individual efforts in some big moments which you need when you play a team that’s that good. This is part of our process, and there are also so many things we can be better with, and we’ll be looking to accomplish that this weekend.”

Quinnipiac dominated the second period with three goals within ten minutes of each other.

Senior forward Grace Markey got the second goal of the game when she put in a shot on the backdoor next to the left post and had a quick release on the pass across the crease. Senior forward Taylor House had a fancy assist on the play.

Less than two minutes later, the Bobcats struck again. Senior forward Laura Lundblad displayed great patience on a 2-on-1 chance and rifled a wrister into the top right corner.

House got the eventual game-winning goal seven minutes after Lundblad made it 3-0, giving the Bobcats a 4-0 lead with 1:30 left in the period.

The Raiders did not go down without a fight, however. Sophomore forward Sammy Smigliani got Colgate on the board with a little over a minute remaining in the period, and the Raiders used that momentum and showed life in the third frame.

“We won a lot of pucks quicker,” Turner said. “When Colgate gets it they keep puck possession and they’re hard to play against. We had to figure out how to pressure them quickly and look for some of their top players and find that transition and I thought we did a good job of that.”

The Bobcats offense wasn’t as explosive in the third, which allowed Colgate to take over. Quinnipiac junior goaltender Logan Angers made the necessary stops for the majority of the period, but the shots kept coming.

Colgate sophomore forward Danielle Serdachny didn’t show any sign of quitting, scoring the Raiders’ second goal with less than two minutes to play. Serdachny then got another goal a minute later, which was her 10th goal of the season and sixth against the Bobcats.