Joe O'Connor continues to make an impact on his neighborhood Bobcats 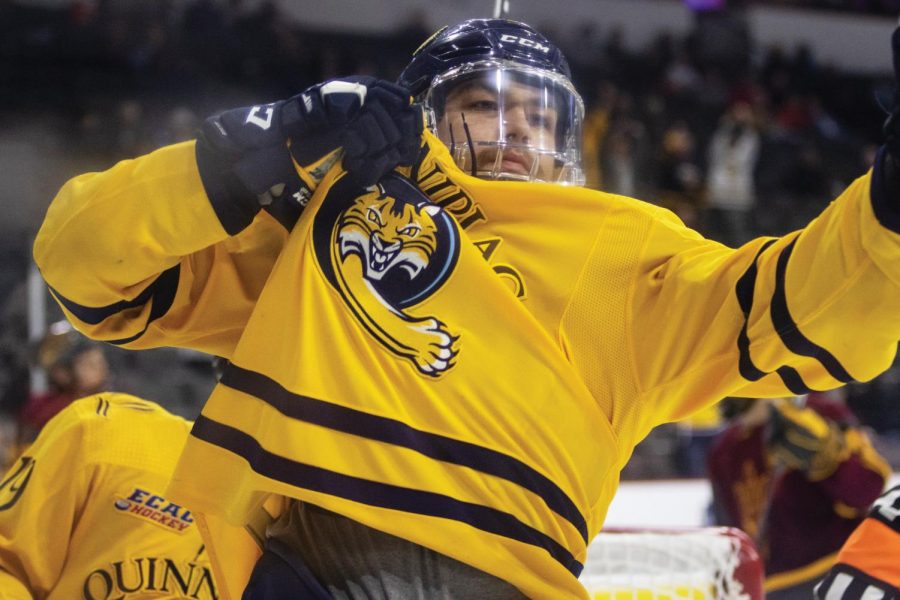 Stepping onto the ice, field or court at the highest level with friends and family in the crowd is every athlete’s dream growing up. Looking into a crowd that you were once a part of and realizing that your loved ones are here to cheer you on at a Division I level is a luxury most athletes do not have.

In recent years for professional sports, we have seen big-ticket free agents do everything they can to sign with the teams they grew up idolizing. For Quinnipiac men’s ice hockey senior forward Joe O’Connor, he has already achieved that goal.

Growing up as a Hamden, Connecticut, native, O’Connor and Quinnipiac instantly connected. His mother is a nurse at the university, and his family has owned men’s ice hockey season tickets since he was young.

This deep connection is what made his first home game so special.

“I just couldn’t stop smiling in warm-ups,” O’Connor said. “All my friends were there, and I think my whole family was there.”

O’Connor’s four-year teammate and team captain, senior forward Odeen Tufto, knows how special playing for your hometown college is. Being from Chaska, Minnesota, Tufto isn’t able to have the same experience as O’Connor but sees its value.

“I think it’s huge,” Tufto said. “Family and friends coming to the game, that means so much. If I was playing for my hometown college, it would be something that I would never forget about. It would be so special to go on the ice every time, and you’re stepping on a rink that’s just a couple miles from your house.”

Now in his senior year, O’Connor has had plenty of these experiences, but none better than in the 2018-19 season. That’s the year Quinnipiac made the NCAA tournament, and O’Connor made a big splash.

“He’s got a couple great memories scoring big goals at big times,” Tufto said. “It’s just kind of what he does.”

One of the memories that Tufto referred to came against Arizona State University. Just three minutes into the first round of the 2019 NCAA tournament, O’Connor netted an early goal, giving the Bobcats a 1-0 lead, propelling them to a 2-1 victory over the Sun Devils.

That 2018-19 season, as O’Connor puts it, is when the team became a tight-knit group, something he has tried to continue as a leader.

“We turned sophomores, and we became a whole family as a team,” O’Connor said. “I think we do a really good job of bringing the freshman class in and making them a part of that family right away. I feel like we’ve done a great job over the past few years of doing that with younger classmates.”

The 2020-21 roster features four seniors, all playing different roles in the family they have built. As the captain, Tufto is asked to lead by example, while O’Connor and goaltenders Keith Petruzzelli and Josh Mayanja provide comedy and an easy-going attitude.

“I tend to be a little more of the serious guy sometimes and Manny and Keith and Joe kind of try to lighten the room and keep things not as serious,” Tufto said.“I think they do a really good job of having a good balance.”

Every team needs a guy that can keep the roster tight — a player like Kevin Hayes of the Philadelphia Flyers. While he is one of the premier talents on the ice, he is also known for pulling plenty of shenanigans off of it. This easy-going mentality provides plenty of opportunities for team bonding, something that is difficult during the pandemic.

With COVID-19 putting the kibosh on team activities outside of the rink, O’Connor has tried to incorporate this team bonding into everyday practices.

“You really can’t hang out and do the whole team bonding thing, so you kind of really have to get your team bonding in at the rink and whether that’s a hard practice and you’re battling or in a team workout, it’s just a different kind of team bonding,” O’Connor said.

Despite the unique season, O’Connor feels confident in the roster. With a 14-5-4 record and the top spot in ECAC Hockey, the No. 11/12 ranked Bobcats look to make a championship run to end O’Connor’s senior campaign, after his junior season was cut short.

“It was tough last year,” O’Connor said. “We were starting to come on, but this year we’ve been pretty much good the whole year so hopefully we can get to the next step.”

While this may be O’Connor’s last chance to relive the journey he had his sophomore year, he thinks that Quinnipiac’s future teams have plenty more tournament runs in store. Headlined by a class that will feature nine seniors next season, the men’s ice hockey team’s future is a bright one.