Democrats have failed once again to do the bare minimum, but is it by design? 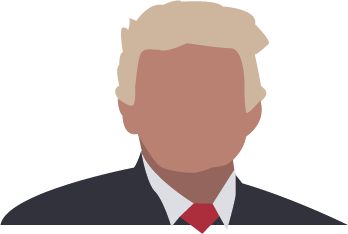 In January 2016, Donald Trump said what would turn out to be the truest thing he has ever said.

“I could stand in the middle of Fifth Avenue and shoot somebody, and I wouldn’t lose any voters,” Trump told rally-goers in Iowa.

It happened exactly how he said it would. He got away with the deaths of several people during the Jan. 6, Capitol Hill riots, and ever since, he has barely lost any support from his buddies in Washington, D.C., or his crazed fanatics.

The Senate found Trump not guilty of inciting an insurrection, despite clear evidence showing that the insurrectionists acted directly on Trump’s words and tweets. Hell, even Senate Minority Leader Mitch McConnell believes he’s responsible despite still voting to acquit.

For the past few years, voters have been told to “vote blue no matter who.” That strategy has led to Democrat control of the House, Senate and presidency, as well as several state and local positions. But what has that unilateral control really led to?

In regard to the impeachment trial, it led to an embarrassing defeat. The Senate had just passed a motion to allow witnesses, but Democrats caved instantly to moderate pressure from Republicans who were concerned it would take too long.

In California, Democrat control under Gov. Gavin Newsome has led to almost 50,000 deaths due to COVID-19, as well as 1,709 approved permits for oil and gas production in 2020 despite several promises not to, leading to calls for his resignation.

In New York, Gov. Andrew Cuomo put elderly lives at risk by forcing nursing homes to admit thousands of COVID-19 patients in March 2020. After it quickly turned into a disaster, Cuomo tried to cover it up by lying about the number of people who died in nursing homes. State officials reported 8,500 deaths. The actual number was over 15,000.

In Washington, D.C., Congress let a psychotic fascist walk free, President Joe Biden and Vice President Kamala Harris are compromising instantly on who gets a few pennies in a new stimulus check, and there are still migrant children at the border who do not know where their parents are. 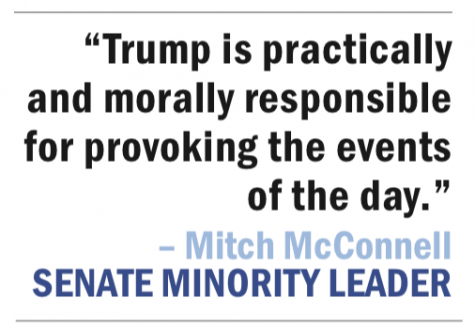 And about those stimulus checks that people were promised, Biden pivoted away from the $2,000 amount that he said would “go out the door immediately” and instead has opted for only $1,400 and is willing to limit who will be receiving it, possibly cutting off thousands of people who desperately need it.

We were promised that if Democrats Jon Ossoff and Rapheal Warnock were elected into the Senate, we would get instant relief. A promise has never been broken so quickly. If your political philosophy revolves around compromising with the other side and refusing to use the power you currently have to its fullest extent, then maybe you never believed in what you’re compromising to begin with.

Needless to say, this new administration has gotten off to a horrible start.

I am constantly reminded of a quote from the late writer Douglas Adams in his comedy science fiction book, “The Hitchhiker’s Guide to the Galaxy.”

“Anyone who is capable of getting themselves made President should on no account be allowed to do the job,” Adams wrote.

While that line is meant to be a joke, the question must be asked: are these politicians inherently unqualified for the positions they are so consistently voted into? 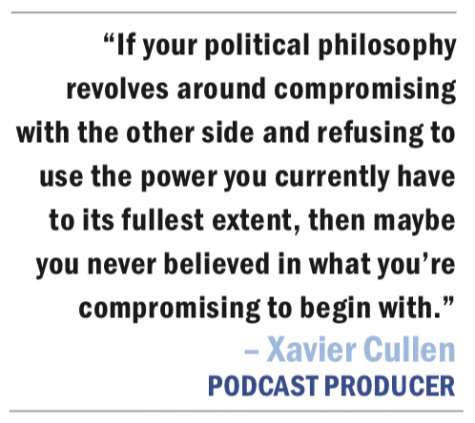 One possibility is that Democrats are too obsessed with trying to please everyone. Democratic politicians think they have to make a career off of compromising their own beliefs and morals to the point where they become only what they believe voters want them to be. Of course they are hypocritical — being against widely-liked policies such as decriminalizing drugs, Medicare for All and increasing the minimum wage.

This is clear when both Biden and Nancy Pelosi say it is necessary for America to have a “strong Republican Party.”

So when it comes to life-saving stimulus checks that are widely supported by the people, Democrats get strong-armed by Republicans into reducing payments to a one-time, means-tested $1,400 stimulus check that can barely pay peoples’ rent. This is of course hated by everyone, but why do what the people you represent want when you can just lick the boots of your Republican colleagues?

But I believe another theory paints the Democrats in a much more honest light. I don’t believe that all of this is an accident. I don’t see any way how Cuomo, who has been involved in politics ever since he managed his father’s campaign for governor in 1982, would overlook half of the deaths in nursing homes. That doesn’t just randomly happen.

Maybe when Biden and Pelosi said they wish to see a strong Republican Party they didn’t say that because they believed it was the most appealing to conservatives and centrists, maybe it’s because they actually agree with what the Republican Party stands for and advocates and don’t really care about the progressive label they hold so dear to them.

With every day that goes by that children at the southern border are still locked away in concentration camps, Biden is continuing to allow the horrific treatment and deaths that occur there. But again, why would he change anything? As vice president, Biden and former President Barack Obama locked up kids in cages and deported more migrants than any administration before them.

It’s important we stop chalking up the inactions of Democrats to stupidity or incompetence. Instead, we must treat them as if they are actively pushing for these horrible things to happen because the result is the same either way.