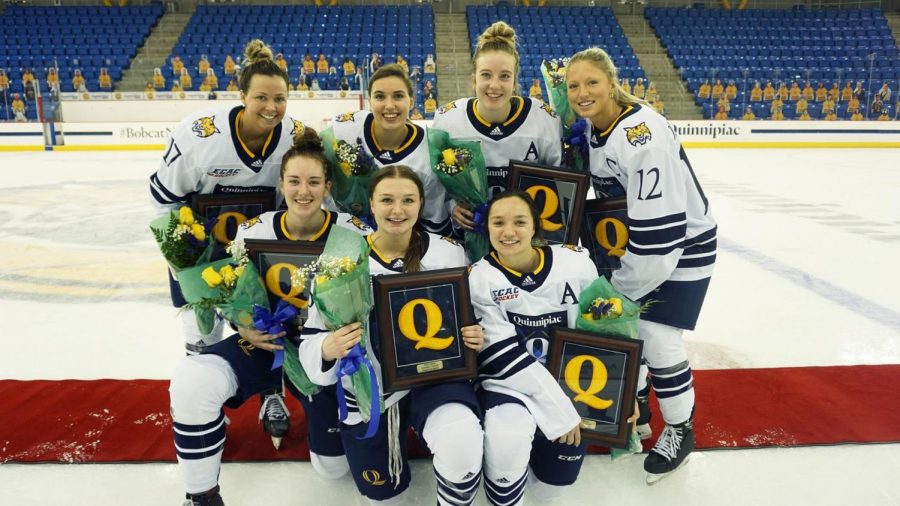 “We kept fighting to create chances,” Quinnipiac women’s ice hockey head coach Cass Turner said. “We let up some goals, but we didn’t get lost in that one moment and we kept playing the game and staying in the present a lot better than yesterday. I think when you play that way, you can find a way to capitalize and put the puck in the net.”

St. Lawrence got the scoring going thanks to sophomore forward Julia Gosling’s third goal in two games, but the Bobcats answered back quickly with a goal of their own from senior forward Laura Lundblad.

Lundblad’s goal opened up the game and led to more scoring in the first period. Quinnipiac took a brief lead after junior defender Courtney Vorster put home a clean wrist shot. Just five minutes later, the Skating Saints responded with a goal of their own from sophomore forward Shailynn Snow to even the score again.

“I think today there were a lot more rebounds for us,” Turner said. “I thought we did a good job trying to capitalize on those chances. We used our screens a lot too, if I think about the shots they had today and the shots they had yesterday and I think it was much better in addition to the time of possession.”

Things slowed down a lot in the second period after an intense first period. There was no scoring for 14 minutes before senior forward Taylor House gave the Bobcats another lead with a strong shot in front of the net. St. Lawrence evened the score once again when senior forward Jessica Poirier scored to make it 3-3 just 27 seconds later.

The Bobcats dominated in the third period, and had the shots on goal to show for it. Turner had a very specific message for her team going into the final frame on senior day.

“I told them we have to keep attacking,” Turner said. “We’re usually aggressive and try to win pucks back so if we’re able to do that we can keep attacking and playing offense. That’s our goal always, and that’s what we talked about. Looking for ways to be in better positions when we shoot to look for rebounds and stay on offense, how can we change lines at the right time so we can keep them in their zone so the next group can get great chances.”

In the third period, the Bobcats came out firing. They were able to break the deadlock nine minutes into the period with a game-winner from sophomore forward Sadie Peart. Just a few minutes later, freshman forward Olivia Mobley iced the game to give the Bobcats the victory.

Quinnipiac and St. Lawrence have one more tilt remaining in this three-game set. The rubber match is set for tomorrow, Feb. 15, at 2 p.m.