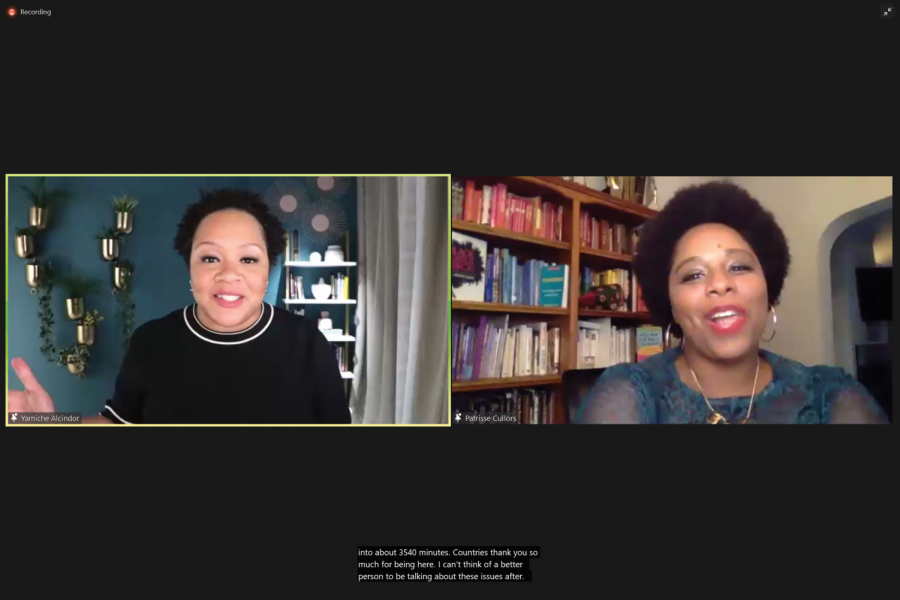 It’s a new year, a new presidency and a new semester, but students who attended a discussion about Dr. Martin Luther King’s life and legacy on Jan. 27, were reminded there is still work to be done.

“The Work Ahead, the Work Within: Reflecting on King’s Dream” was a virtual conversation that honored King’s life, dream and legacy in the context of today.

The conversation between Cullors and Alcindor exemplified the interconnectedness between King’s life and the state of the country after the election of President Joe Biden and Vice President Kamala Harris, the insurrection at the United States Capitol on Jan. 6, and the ramifications of what Cullors described as the “twin pandemics” of racism and COVID-19.

Early in the conversation, Cullors mentioned the importance of reflection and how King was constantly assessing if “what he asked of Black people” at the time was the correct way to move forward. She also explained how King’s criticism of “white moderates” in particular is relevant today with the change in the White House.

“As we move into a new administration and feel the excitement of no longer having Donald Trump as president, now is the time, more than ever, for us to remain vigilant about white moderates and white moderate politics at how it actually didn’t get us free before Donald Trump and it won’t get us free now,” Cullors said. “I wholeheartedly believe that this administration has to move forward in really creating a Black agenda. I’ll say this over and over again, but until Black people are free, no one else will be able to get free.”

Cullors also talked about how we can learn more about King besides his struggle and was reminded of this when a picture of King in Jamaica circulated online during the namesake’s holiday.

“We kind of froze King in time as an ancestor on a podium, as if he didn’t have a full expansive life,” Cullors said. “He had children, he had a family, he had flaws. I think when we’re able to remember King in his full humanity, we’re able to actually give him more space and breadth and it thus gives other movement leaders more space and breadth.”

Cullors also talked about how the siege on the Capitol was a reminder of the existence of white supremacy and its link in American history.

“I remember watching it and the very first thought I had was ‘Oh my goodness, imagine if that was Black people, imagine if that was Black Lives Matter,’ there’s no way that, one, it wouldn’t be a massacre but, two, folks wouldn’t be arrested in the thousands,” Cullors said. “This action on the Capitol comes from a long legacy of white supremacist mobs trying to upend democracy.”

When recalling the nationwide Black Lives Matter protests during the summer, in the heat of the pandemic, Cullors explained how monumental the moment was in history.

“Black people and our allies went to the streets in the middle of a pandemic to challenge racism,” Cullors said. “People risked their lives to show up for both ourselves and also it was the largest multiracial movement in human history and people felt inclined to show up for what we call the twin crisis, the twin pandemics: racism and COVID. I feel really moved by our movement.”

In the question and answer section of the program, moderator asked an attendant’s question to Cullors and Alcindor that centered on self care and maintaining positive mental health during these turbulent times. Alcindor explained how music from artists like Bill Withers has helped her a lot. She also gave encouraging advice for college students.

“I know that there are probably a lot of college students on here, I just really implore you to try to take a break on yourself,” Alcindor said. “Try to be gentle on yourself … these are times where you cannot spend all day beating yourself up.”

While King was a Black man, the discussion did spend time addressing the dual forms of oppression that Black women face. One response highlighted a university’s responsibility to have a pipeline of Black women in higher education.

“One of the first things universities need to do is decide if they are willing to recruit, develop, retain and appropriately pay Black women. There’s a lot of universities who say they are and then Black women get there and they don’t continue on the promise,” Cullors said. “This has to be an institution-wide initiative. This cannot be (only) certain individuals at the campus who are excited to bring on Black women, I’ve experienced this myself.”

Cullors continued by describing the reality that for there to be Black women in leadership positions in companies and predominantly white institutions (PWI) especially, there must be white people who are moved from those places of authority.

“We are not going to actually change the systems that we live in if we don’t have folks moving out of their seats of power,” Cullors said. “It’s just not gonna happen. So there has to be a real confrontation around whiteness and why there’s sort of an obsession with whiteness at the university, at PWIs in particular.”