Three in the key: A big problem for opponents 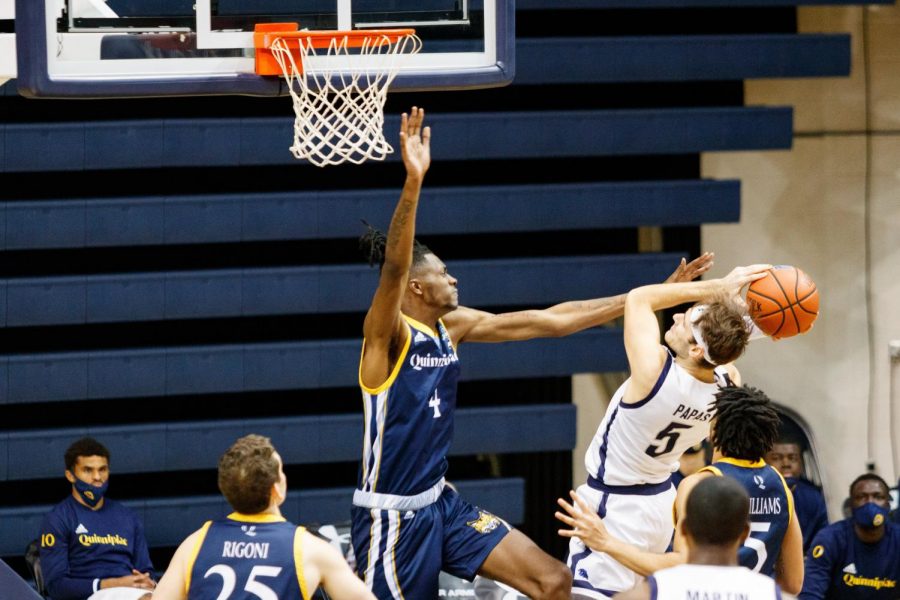 “I think (Pinkney’s) been putting it together,” Quinnipiac men’s basketball head coach Baker Dunleavy said following the Jan. 8, game against Manhattan. “For our first four games, he’s been one of our bright spots for sure. He’s just so unique. He’s so talented. He’s so smart. And for him, he’s battling to learn for consistency.”

Pinkney played a career-high 42 minutes in a double-overtime win against Manhattan on Jan. 8. He scored 16 points on 7-of-8 shooting from the field — career highs for points, field goals made and field goals attempted.

“Overtime was probably one of the biggest leaps I had as a college player,” Pinkney said after the game. “Even getting into that stance, just playing in that moment is big for me.”

Standing at 7-foot-1, Pinkney is the tallest player in the MAAC and uses this to his advantage. Similar to Marfo, Pinkney has become a consistent threat on both ends of the floor. He’s a regular option for alley-oops and lob passes for finishes in the paint. Through 10 games, the sophomore is shooting 83.3% from the field, all of which are 2-pointers.

Additionally, Pinkney creates havoc on the defensive side of the ball. It’s easy to predict he’d be a strong shot blocker given his height. He’s currently averaging 2.9 blocks per game (BPG), good for second-best in the MAAC.

That said, Pinkney’s defensive impact isn’t limited to just the painted area. He’s a solid perimeter defender as well. In the closing moments of the Jan. 8, game against Manhattan, Pinkney blocked a jumper and secured the rebound, sealing the win for the Bobcats.

“When we switch, coach tells us to stay on the big because he knows I can guard guards just as much as I can guard big men,” Pinkney said after the game.

Pinkney's block at the end of the game: pic.twitter.com/PPJalQC3QL

His defensive impact goes further than his individual statistics. The Bobcats limit their opponents to 36.8% from the foor — second in the nation — and 28% from behind the 3-point line — 10th in the nation.

Though the Jan. 8, game against Manhattan stands out as a night of career highs for Pinkney, his season as a whole has been strong. Dunleavy said after the game that Pinkney’s matured greatly since last season.

“This was a huge step for him,” Dunleavy said after the game. “He’s worked really hard with our strength and conditioning staff on his body. And a year ago, last spring, no way he can play 20 minutes let alone 42. So, it’s a tribute to the hard work he’s putting in. I think when you have moments like this, it makes you want to work harder.”