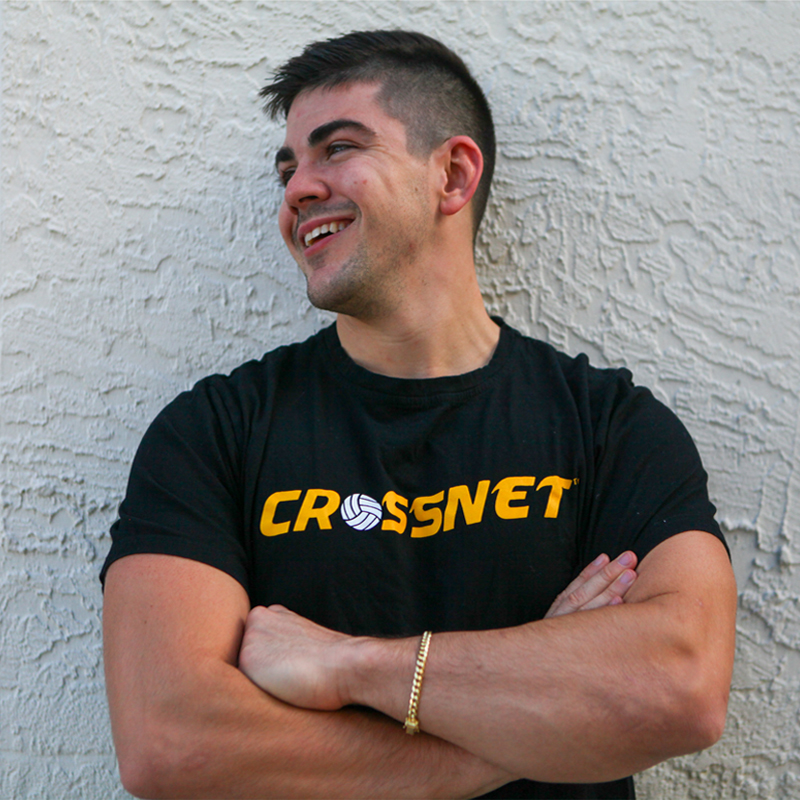 Quinnipiac University graduate Chris Meade’s company Crossnet was recently recognized as one of the 2021 Forbes 30 Under 30 sports companies.

“It doesn’t surprise me that he’s finding success,” said David Atkins, associate professor of film, television and media arts. “The combination of his easy-going personality combined with a respectful disregard for rules suggested early on that he had a strong potential to innovate and achieve after life at Quinnipiac.”

After receiving a film, television and media arts degree in 2014, Meade developed Crossnet alongside his brother, Gregory, and childhood friend, Michael Delpapa. Spawning from a combination of both four square and volleyball put together, Crossnet is the first four-way transportable volleyball game that can be played both indoors and outdoors.

“Once we came up with the idea for four-way volleyball, we did a quick Google search to see if it was already made. Nothing was on the internet,” Meade said in a previous Chronicle article. “We couldn’t believe it, it felt too good to be true.”

Since launching the company in 2017, Crossnet has expanded its employee roster, embedded itself in over 2,000 retail stores across the United States, established a warehouse in Canada and developed a branded partnership with Wilson. Once realizing the credentials of the brand, Meade said the company applied to Forbes 30 Under 30 and went through an extensive interview process before being selected.

“When we woke up and saw that we were on the list, we were all in shock,” Meade said. “It was amazing to see all of our favorite sports athletes on the list next to the picture of the three of us. It was a wild feeling to see that.”

Despite recent expansions in the company’s outreach, Meade said the most rewarding factor of the recent title has been watching their hard work and perseverance finally pay off.

“We’ve seen a good increase in sales,” Meade said. “But it’s also just nice to ultimately get the recognition we have been working so hard for. In the last two months since we’ve been nominated, we have talked to a lot of higher quality individuals and CEOs.”

Matthew O’Connor, dean of the School of Business, emphasized that the foundational base to starting every business begins with a strong idea and is later followed by all the basic business management functions. He said Crossnet’s recent recognition is an exciting accomplishment and establishes a firm sense of promising opportunity for the future.

“I think 30 Under 30 is a symbol of possibility,” O’Connor said. “You’ve got enough traction that you caught people’s attention, but people are also saying ‘this is a good enough idea that it’s going to continue to grow.’”

Aligning with the work produced by other Quinnipiac graduates, O’Connor said Meade’s success with Crossnet reflects directly on the education taught at Quinnipiac and the mentality the school continues to instill in its students.

Meade said that although he didn’t come from the most financially stable background, he could blend the skills he learned from Quinnipiac with his strong-willed determination to turn his idea into a reality.

“Chris was always an engaging and creative student when he was at Quinnipiac,” said Mike Medina, director of campus life for recreation. “I’m proud of the ingenuity he has displayed in creating Crossnet and excited that his team has found a way to keep people active with their innovative product.”

Although Meade didn’t foresee an entrepreneurial career path when he graduated, he said that following his dream of Crossnet was the most worthwhile decision he’s yet to make.

“Chris was inquisitive and engaged with his experience at Quinnipiac,” said Danielle Reinhart, assistant dean of student services for the School of Communications. “It is gratifying to see him enjoy such success.”

Despite seeing an exponential rise in success and making the Forbes 30 Under 30 list, Meade said the company plans to continue to find ways to expand and develop a wider outreach.

“The biggest thing for us this year is growing a global presence of the sport,” Meade said. “My end goal for the company is when someone sees a four-way volleyball, they will automatically know it’s Crossnet and know how to play the game. I’m not going to be happy until everybody knows that.”