From the Bobcats to the Whale

Abbie Ives reflects on her Quinnipiac career after debuting in NWHL 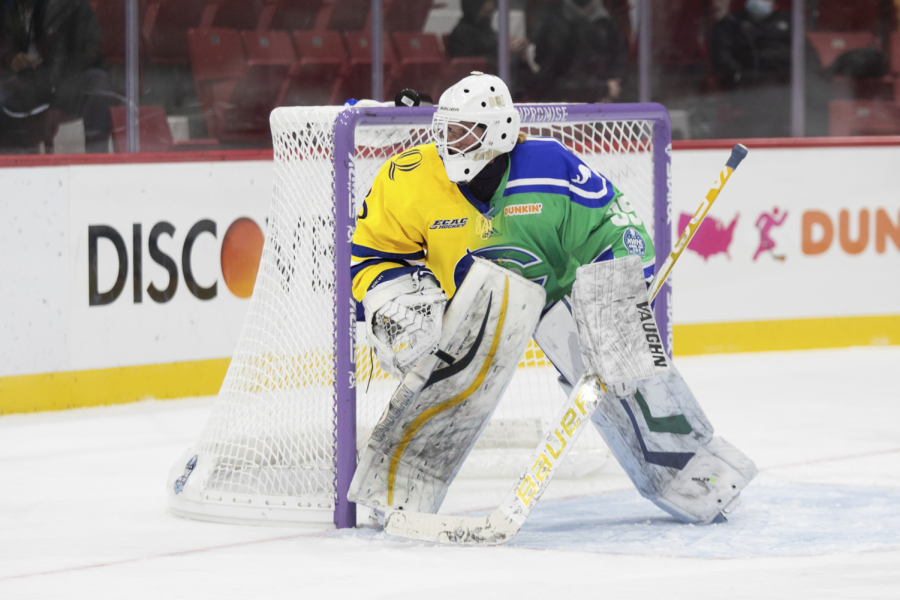 ‘I don’t know if I’ve ever met anybody who loves hockey as much as she does,’ Konigson said.

Building upon her historic Quinnipiac women’s ice hockey career, Abbie Ives has been nearly impenetrable between the pipes for the Connecticut Whale in the NWHL.

Ives announced her presence with authority, stopping 24 of 25 shots en route to her first NWHL victory in her first start. Through her first four games, Ives has posted a .936 save percentage (SV%) and a 2.01 goals against average (GAA).

“It’s been really exciting,” said Ives, who graduated from Quinnipiac in 2020. “Getting to play against some of the top players and kind of just play that pro-style game and to be in this bubble with a chance to play on national TV, it’s just been really cool.”

Since she was young, Ives knew she wanted to be a Bobcat. She came to games at the then Frank Perotti Jr. Arena while in elementary and middle school. When it came time to commit, her decision was clear-cut.

“The prospect of being able to compete for a national championship, I think it was kind of a no brainer, that I wanted to go (to Quinnipiac),” Ives said. “I knew that if I went there, I really had the opportunity to be as good as I possibly can. The whole staff is working with you to do anything they can help you get better. And wanting to compete for a national championship every year.”

During her four seasons at Quinnipiac, Ives was nothing short of spectacular, carving her name in the Bobcat history books. In her freshman year, she appeared in six games, started in three of them and allowed only one goal in 259:10 minutes of game time. She also recorded two shutouts out of her three starts.

Following the departure of starting senior goaltender Sydney Rossman in 2017, Ives was promoted to the starting role. In her first season as the starter, Ives posted a .921 SV% and a 1.78 GAA which ranked fourth amongst starting ECAC Hockey goaltenders, which was only .002 away from second place.

“We relied on her every game,” Quinnipiac senior defenseman Olivia Konigson said. “She made the solid saves every time we needed her to. And she made the outstanding saves that not every goalie would make. So that set her just above and beyond. She was just a huge part of our defense.”

As a junior, Ives emphasized her level of consistency, finishing with a .924 SV% and a 1.89 GAA. Only this time around, she doubled the number of shutouts from the previous season, finishing with six total.

Senior year was the time for Ives to shine. Recording a .927 SV% and a 1.90 GAA alongside three shutouts, Ives transformed into a brick wall for the ECAC Hockey playoffs. Her third season with a plus-.920 SV% and sub-2.00 GAA was only completed by three other teams during her Bobcat tenure. However, she was the only starting goaltender in the ECAC Hockey to accomplish this in three consecutive seasons.

“As a defenseman, it was nice to know if you made a mistake, (Ives) was kind of your extra layer behind there to back you up,” Konigson said. “It made us more competent in our abilities to be able to make those more risky plays knowing that she would have her back back there.”

During the playoffs in her first two starting seasons, Ives was sound in net and able to keep Quinnipiac in all four games. But in the 2019-20 ECAC Hockey quarterfinals, Ives played lights out. Following a game one loss, Ives stopped 85-of-90 shots for a .944 SV% and a 2.00 GAA in games two and three, both of which went to overtime. Unfortunately for Ives, her Bobcat career ended after game three’s loss. Ives commanded the respect of the entire team, serving as the backbone of the defensive core, not only during the quarterfinals against Princeton, but throughout her entire career.

“She was super motivating,” Konigson said. “She led by example, she worked so hard on and off the ice. She pushed everybody to want to work as hard as her which was nearly impossible. I don’t know if I’ve ever met anybody who loves hockey as much as she does. But she was always a vocal leader. Always there in between periods to rally up the team and always led by example.”

Ives left a legacy behind her as she joined the Whale. Her time with Quinnipiac will forever be remembered in the program’s history books as she finished her career with 2,231 saves (second all-time), a .926 SV% (third all-time), 14 shutouts (third all-time) 47 wins (fourth all-time) and a 1.73 GAA (fifth all-time). As Ives ventures on with the Connecticut Whale, she said her experience at Quinnipiac was nothing short of memorable.

“I definitely owe a lot to Quinnipiac,” Ives said. “Just the experience of playing in the ECAC. And not only the ECAC, but playing for Quinnipiac, where you have high expectations on you all year round, to be training, to be performing, to win games. I think just that pressure every day and those expectations and accountability has shaped me into who I am today and allows me to be able to kind of go into these big games and know what to do and know what I have to do.”