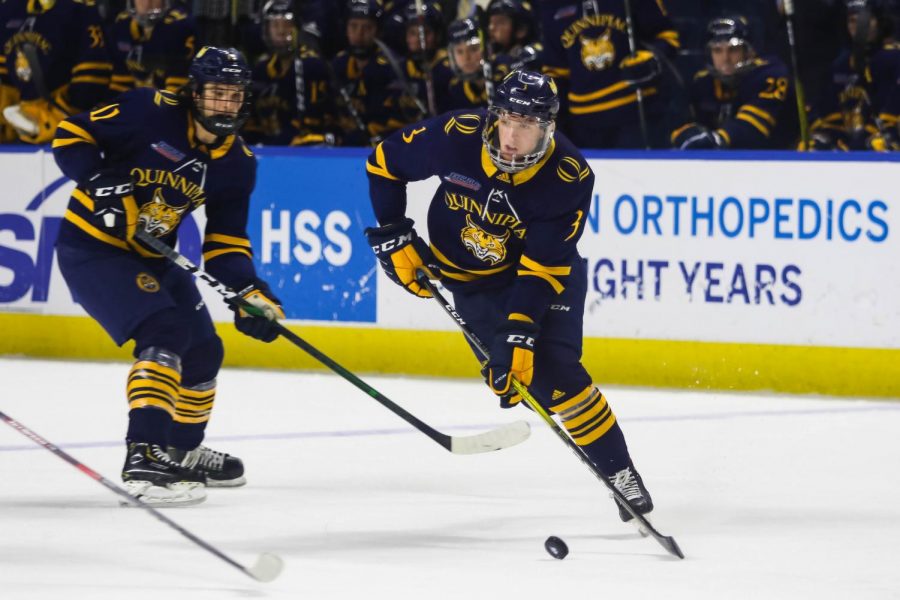 As No.11 Quinnipiac enters its final third of the season, an ECAC Hockey mens title lies in sight with a tough road ahead.

ECAC Hockey consists of four teams -Clarkson, Colgate, Quinnipiac and St. Lawrence- that have a shot at winning the conference. The only issue is that they are the only schools in the conference competing this season.

Quinnipiac is currently tied for first with the No.12 Clarkson Golden Knights, and both teams could not be more evenly matched. The Bobcats and Golden Knights have faced off six times this season and have split regulation, overtime and shootout wins for 3-2-1 records.

The St. Lawrence Saints sit two points behind Quinnipiac and Clarkson, garnering second place in the conference. Quinnipiac claimed the first game against the Saints in a shootout on the road and then lost the following game in regulation at home.

The Colgate Raiders round out the conference in fourth with 11 points. However, with each ECAC Hockey game accounting for three points, they too have a genuine shot at claiming the title. Quinnipiac shut out Colgate in its two matchups this year.

The Bobcats will take a brief, but much needed, hiatus from ECAC Hockey battles and host Long Island University on Jan. 30. After that, it’s eight straight games against the Saints and Raiders.

Quinnipiac began the season playing an intense amount of hockey as its first nine games were played within 18 days. The Bobcats sought revenge after dropping the Connecticut Ice Championship to Sacred Heart Pioneers last year and proceeded to rout them 9-2 on opening night.

Later that week, Quinnipiac hosted the Bowling Green Falcons for a fiery USCHO ranked matchup. The Falcons held seven games under their belt at this point, meanwhile the Bobcats had just played their first two a few nights prior.

During the first game, it was evident that Bowling Green was more prepared and seasoned. It dominated the first 40 minutes of play, and Quinnipiac’s lack of discipline set back any progress it made to that point.

Granted, the physical game that Bowling Green played was much more fierce than that of Sacred Heart, so mistakes were bound to happen. The Bobcats caught a glimpse of light and outplayed the Falcons during the third period but couldn’t execute.

Certainly a frustrating loss but one the team could learn and recoup from for the following night.

Whatever Quinnipiac head coach Rand Pecknold said before the second contest worked, as the Bobcats came out blazing. Breakouts were smooth, passes were crisp, possession was lengthy and shot opportunities were numerous.

Two silky goals from the mitts of junior forwards Ethan de Jong and Desi Burgart, gave Quinnipiac a confident 2-0 lead through nearly two periods. A late power-play goal for the Falcons made it a nail-biter.

Going back to earlier in the second period, senior defenseman Peter De Liberatore and de Jong sequentially both had opportunities to extend the Bobcat lead.

Junior forward Wyatt Bongiovanni followed suit and nearly netted a third goal for Quinnipiac off of a spin move that could have put the nail in the coffin.

However, the Falcons senior forward Brandon Kruse scored off a blast of a snapshot from quite the ridiculous angle and tied it at 2-2. That changed the entirety of the game.

Merely minutes later, De Liberatore was called for an elbow, which without a doubt, is the worst call an official has made in any Quinnipiac game this season. De Liberatore went for a hit against junior forward Taylor Schneider right at the Quinnipiac blue line.

Schneider picked his head up at the last second and immediately began to turn his whole body out of the path of the hit, ultimately forcing him to leave his feet. The review of the hit evidently showed that zero contact had been made during the process.

The official that had the best possible view of the whole sequence didn’t make the call. However, the referee on the opposite end of the neutral zone, who could only see the back of Schneider’s jersey, called the penalty.

Of course, I can sit here and blame the referee for making a horrendous call to decide the game, or blame the officials for calling only two penalties against Bowling Green to the six penalties called against Quinnipiac. But the overlooked sequence that led to said call is that De Liberatore attempted to chip the puck out of the zone seconds prior and accidentally shot the puck over the glass, resulting in a defensive draw for Quinnipiac.

The Bobcats’ lack of execution and discipline in crucial moments was the reason for the loss. As easy as it is to blame outside forces for mistakes, the better teams blame themselves and look to improve upon their mistakes.

During more emotional matchups, Quinnipiac’s lack of execution and discipline appeared in big spots. And it is OK that this happens. Over-aggressive plays show passion that can drive a team. I’d be more worried about the outcome of the season if it didn’t display this characteristic.

The most notable matchups with these mistakes are against Bowling Green and each game with Clarkson. This is where Pecknold needs to establish the learning curve.

These mistakes are more than OK to make in the regular season. But come playoffs it’s a different story. If the Bobcats can clean up those areas reasonably, they will be a scary team to play against.

Outside of the emotional aspect, the Bobcats desperately need a hot stick to carry them through the final stretch of games. Nearly 50% of the team’s goals have come off the sticks of three individuals.

Freshman forward Ty Smilanic already shows a natural ability to finish from anywhere on the ice and has been the second most dominant forward on the team throughout the season. He leads the Bobcats with 11 goals.

Burgart and de Jong both tallied eight goals so far and have been clutch in pivotal moments this season.

Outside of those three, senior captain and forward Odeen Tufto continues to shine as the best player in the country, leading the Bobcats with 28 points in just 18 games.

His 1.56 points per game average is absurd considering that in a full season -roughly 38 games- that would be a 60-point pace. Tufto’s best season was his sophomore year when he finished with 42 points in 38 games.

Tufto sits at the top of the Division I point totals by seven points. He amassed a preposterous 141 points in 120 games during his four years at Quinnipiac. That puts him at No.1 of all current NCAA Division I players and No. 11 all-time amongst Quinnipiac players. He has the opportunity to climb up to No. 7 all-time for Quinnipiac at 158 points.

If Quinnipiac wants that title, it needs one or more players to step up their game. With junior forward Bongiovanni still sidelined following an ugly hit (53 second mark) early in the season, the Bobcats desire depth scoring.

The two forwards I expect to take that next step forward are sophomores Skyler Brind’Amour and Ethan Leyh.

Brind’Amour has been steady as a two-way center for the Bobcats, winning 55% of his faceoffs this season, killing penalties and occasionally notching a point. He has the capabilities to find the back of the net, but he needs to provide more as a net-front presence.

The big frame and physicality of Brind’Amour could potentially provide tremendous help to the Bobcats during offensive possession. Creating a distraction in front of the goaltender and cleaning up the scraps that fall in front of him would be key for Quinnipiac success.

As for Leyh, he has not scored a goal since opening night. His miserable shooting percentage is merely just bad puck luck. He averages nearly two shots per game and has a lethal shot. If he can create some offense on the rush, rather than just in zone play, his percentage could skyrocket.

He has a great shot and obtains the ability to wire home a one-timer with his left-hand shot. Some unit-two power-play time and a few one-time shots from the right circle would be impactful.

Without Bongiovanni’s left-hand bombs, and Smilanic taking over that side of the first power-play unit, I think it’s Leyh’s time to shine.

The Bobcats need to find that final gear and get the wheels rolling because the competition only gets tougher from here on out.