He puts the chair in Senate chairman

Bernie Sanders is more than just a meme 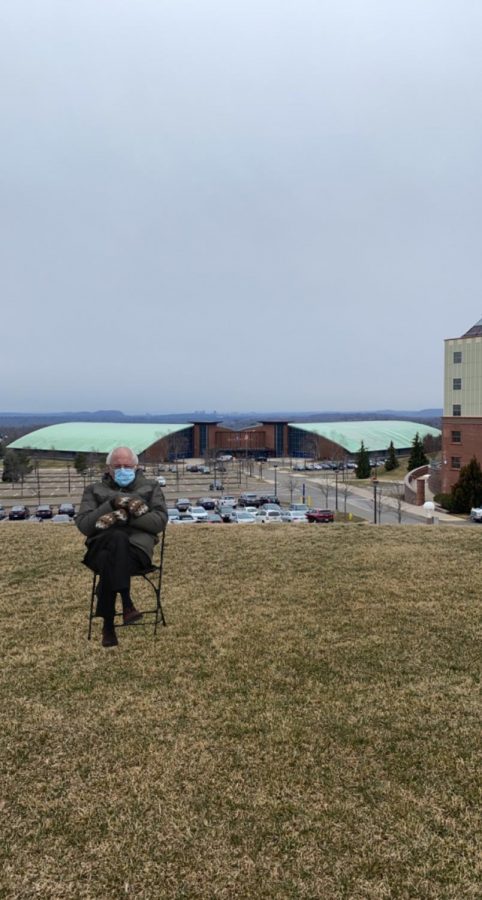 Inauguration Day was not the first time Bernie Sanders has seen his face plastered across social media, and it likely won’t be the last.

This phenomenon dates back to 2016 with a template that reads “Bernie or Hillary? Be informed. Compare them on the issues that matter.” Campaign issues such as college affordability or legalization of marijuana were quickly photoshopped and covered up by satirical issues that made the rounds online.

The intent, focusing on the issues that matter, is often overshadowed by what makes people laugh. When Sanders’ campaign team needed a boost in contributions in the primary, Americans paid more attention to the line “I am once again asking you…” than they did in donations.

While I also laughed as I saw Sanders photoshopped into weddings, moments in American history, sporting events and more this past week, I couldn’t help being frustrated thinking about how much of the attention was on how he dressed in the cold rather than what he’s going to do in his new role or what he’s meant to the country so far.

In fact, there was not much news coverage at all regarding Sanders being named chairman of the Senate budget committee. Sanders has been a senator since 2006 and previously had 16 years of experience as a member of the House of Representatives.

Since bursting onto the scene after announcing his campaign for president in 2015, Sanders has made a name for himself thanks to his Democratic Socialist platforms such as free community college and a progressive commitment to combating climate change.

More importantly, Sanders played the role of the underdog against a thin field of primary opponents who were all but assured the nominee would be Clinton. For Sanders that didn’t matter. He has stayed true to that, and as his 2020 campaign slogan reiterates, it has always been “not me, us” for the 79-year-old senator. He often champions issues that have been seldom talked about and issues that benefit you as a voter, regardless of other ideological disagreements you may have.

Sanders famously disavows any form of corporate greed and wants the “top 1%” to pay more of their fair share in taxes, something especially notable during a pandemic that saw billionaires such as Amazon CEO Jeff Bezos rake in an additional $90 billion while other families struggled to put food on the table.

While he finished as runner-up in both primary races on the campaign trail, he continued on awhile longer ignoring delegate counts. As he watched his opponents concede, he kept going because he cared deeply about his agenda and knew he still had leverage to make a difference in the party.

In the summer of 2019, Sanders traveled by bus to Canada with patients who rely on insulin to live. With substantially cheaper drug prices north of the border, Sanders not only helped these patients save their money for other dire needs but also set out to prove a point that American healthcare is putting citizens at a serious disadvantage.

Even less talked about was Sanders’ arrest in 1963 during a civil rights protest in Chicago. He has focused tremendously on leveling the playing field for minorities in America who fall below the middle class and calls for increased wages.

Sanders has more often than not found himself on the “right” side of history (if you believe one exists), regardless of if you agree with his politics. He has long supported members of the LGBTQ community and even voted against the war in Iraq.

Sanders has not had to defend or backtrack previous records or remarks as often as his political colleagues. As an independent, he had no fears of upsetting a party and voted with his heart instead of his side of the aisle.

What I find to be most important about Sanders’ political career is how he has inspired us. Sure, it was probably a little bit of luck that a bird just happened to fly down atop his podium that read “a future to believe in” during a 2016 rally. Maybe it was even lucky that SNL already had a de facto Sanders impersonator on speed dial in Larry David.

But it was not luck that won Sanders 22 states in the 2016 primary nor was it luck when he started his next campaign so strongly that it saw him briefly supplant Biden as the front-runner for the Democratic nomination in February 2020.

Without a super PAC (short for political action committee for corporate fundraising) and with average donations under $30, Sanders built a movement of Americans who simply had passion for other people. His explosiveness for the progressive movement arguably helped elevate the political careers of new senators, most notably rising star Alexandria Ocasio-Cortez who campaigned with him last spring.

He even had a swarm of political influence over young voters. In such contested, negative election cycles, his relentless spirit and skeletons in his closet led to higher turnout with young voters than either party had seen in quite a while.

I am proud to say that I cast my first vote in a presidential primary for Sanders in the spring of 2020, despite the odds being stacked against him.

I’ll still smile any time I see Inauguration Day Sanders photoshopped into any place other than the U.S. Capitol. However, I’ll also remind myself of the lifelong service he has given back to the country that he loves so dearly and be thankful for his campaign’s ability to inspire me to learn more about the great gift of American democracy.