The dark side of the party 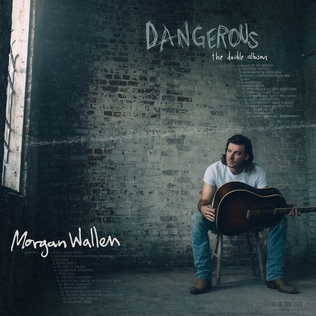 Country music star Morgan Wallen helped fans start 2021 off on the right foot with a 30-song, double album that shows the reckless and ultimately broken side of the singer best known for his 2018 hit “Whiskey Glasses.”

“Dangerous,” released Jan. 8, exhibits a more serious side of Wallen, as he comes to terms with the consequences of drinking, partying and reckless decisions. The album’s theme seems appropriate after Wallen’s performance on Saturday Night Live was delayed when it was discovered that he broke COVID-19 protocol by attending a large party.

Wallen partying it up in the middle of a deadly pandemic was all I could think about as I listened to my personal favorite track on the album, “Livin’ the Dream.”

“Between alcohol and women and Adderall and adrenaline, I don’t ever get no rest/ Sign my life away to be the life of the party,” Wallen sings.

The ironic thing about the song is that while the lyrics are depressing, it’s the kind of song you want to dance to through an open sun roof.

That is the paradox of Wallen. He’s a party but at the same time, the party is killing him.

The other top song on the album was “Sand in my Boots,” the first song of the project. This was a slow song with little instrumentals. For country fans, the sound was reminiscent of Blake Shelton’s, “Austin.” It was full of longing for days past. I thought it was interesting that it was placed as the first song, since it’s about him getting over a summer fling that left him with just sand in his boots.

However, as someone who has been following Wallen, I think it is probably a little deeper than a summer fling. It is most likely speaking to his transience as a person — always on to his next pursuit. The only thing about him that stays consistent is his loyalty to his country roots — his boots.

“Yeah, but now I’m dodging potholes/ In my sunburnt Silverado/ Like a heart broke desperado/ Headed right back to my roots,” Wallen sings in the chorus.

Wallen’s roots and his hometown in eastern Tennessee are themes throughout the album. One of the songs that Wallen pre-released from the album and has already been a hit on country radio is “More than my Hometown,” in which he admitted that no matter how much he might love someone, he could never love them more than his hometown.

This album is one I can’t stop listening to, despite its length and somewhat depressing tone. I have long complained that so much of modern country music is superficial, unrealistic and far too out of touch with how people actually feel and the struggles they endure.

Wallen turned that pattern on its head. This album is real, raw and dangerously addicting.