The warning signs of our fallen democracy 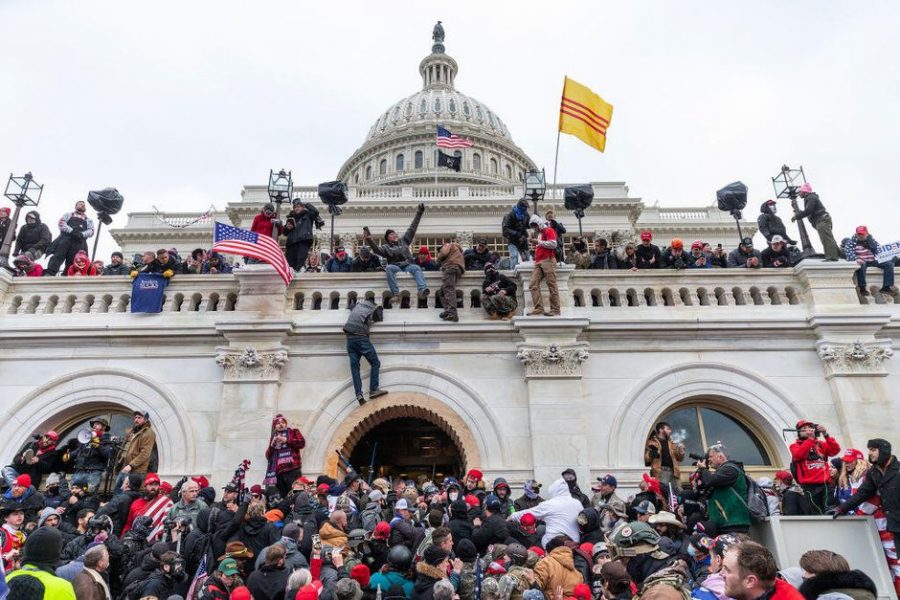 The pro-Trump riots at Capitol Hill did not come out of nowhere.

After the previous year the world suffered through, 2021 was presented as an occasion for a fresh start with encouraging results from multiple COVID-19 vaccines and the preparations for the presidential inauguration. America was blinded by hope and new beginnings, which led to lowered guards, and people who believed that there was election fraud executed an attempted coup in the congressional chambers on Capitol Hill.

Jan. 6, 2021 wasn’t an ordinary day. It was the day in which Congress certified the Electoral College votes, verifying that Former Vice President Joe Biden would become the 46th president. But the events that occurred that day will be remembered as the day America’s democracy was challenged.

For many, it felt like the actions that took place occurred without warning signs, however it hurts to recognize that these red flags went undetected by the radar.

The decline of our nation began four years ago and continues to send shockwaves to the current moment. With the cumulation of travel bans, withdrawal from the Paris Climate Agreement, declaring to far right-wing groups that they need to “stand back and stand by” during a presidential debate, destroying relationships with allies and many other provocations to our democracy.

But one of the most outstanding examples during President Donald Trump’s administration leading to the buildup of the on Capitol Hill was the use of social media, specifically on Twitter in order to promote false claims about election fraud, praise and motivate followers to believe baseless claims about the election and fire federal officials.Celebrities, such as Selena Gomez, have called out social media CEOs on multiple occasions to take preventative actions against further damage, and while these companies did flag certain tweets and posts to be fact-checked, it wasn’t sufficient. It took a video that condoned the unspeakable actions from the rioters for social media companies to ban and block Trump’s Facebook, Twitter and Instagram account after an endless display of reckless behavior.

Online platforms provided a space for people with hatred and anger to unite and create a narrative that would send shockwaves in the world, over a stolen election. The Capitol Hill riots were planned months in advance on pro-Trump websites. The “Stop the Steal Movement” leaders told supporters to not wear masks and prepare to take Washington D.C. back. They were met with a sparse line of police officers with a reluctance to bring in more assistance, such as the National Guard. A retired Capitol Police officer was stunned at the reaction from the agency, releasing a statement saying ““We have a planned, known demonstration that has a propensity for violence in the past and threats to carry weapons — why would you not prepare yourself as we have done in the past?”

Another daunting factor that people are critical of is the lack of caution and security measures at the insurrection. Why was there a considerable lack of police presence? Why did it take so long for the National Guard to be deployed? For what reason did the police not engage or take aggressive measures with the Trump supporters who converted  into rioters that took over Capitol Hill.

However, the most stunning action of that day was the comparison of the Capitol Hill revolt vs Black Lives Matter protests. Activists, celebrities, news anchors and the rest of the world have spoken out on the difference with how the police would have responded based on skin tone. If the protestors had been Black, then they wouldn’t have been stopping for selfies or providing assistance. No, if the protestors had been Black, they would have been greeted with tear gas, batons and violence. Is America openly promoting a message that violent revolts will overpower a peaceful protest?

America was the model country for democracy, but the events on Capitol Hill disturbed the sacred temple. It was a difficult turn of events to witness, watching America transform and not knowing how bloody or dark the next hours could become. Would there be hostages of Congressmen? Why are the police not taking more initiative to take back the Capitol from the rioters? Will America be able to heal from the attack? Trump’s presidency had been marked by jaw-dropping moments that pushed the limits of America’s democracy, but what the public witnessed and felt, with only 14 days left in an unprecedented presidency, will be recalled for generations to come. These rioters were encouraged with lies of a hijacked election from a president who failed to concede because they couldn’t accept they had lost. LigGetty

Not only were people in America left speechless by the attack, but countries around the world, such as England and Germany, were horrified and mournful to see the events unfold based on a refusal to accept defeat in a fair and legal election. Naturally, there were some countries such Brazil, Russia and Iran who began to use the Capitol Hill attacks as propaganda to say why the democratic system is unstable and should not be trusted.

But light always defeats darkness and in an unexpected sign of unity and strength, Congress declared that the electoral votes would be confirmed the night of January 6, and called for legal action against the instigators of the attempted coup, which included the process to attempt to impeach Trump. The united power that emerged from Americans and succeeded in electing Biden into office is essential in showing that America will not let darkness prevail and that democracy will be restored and solidified.