Quinnipiac fails to score against Colgate, suffers first loss of the season 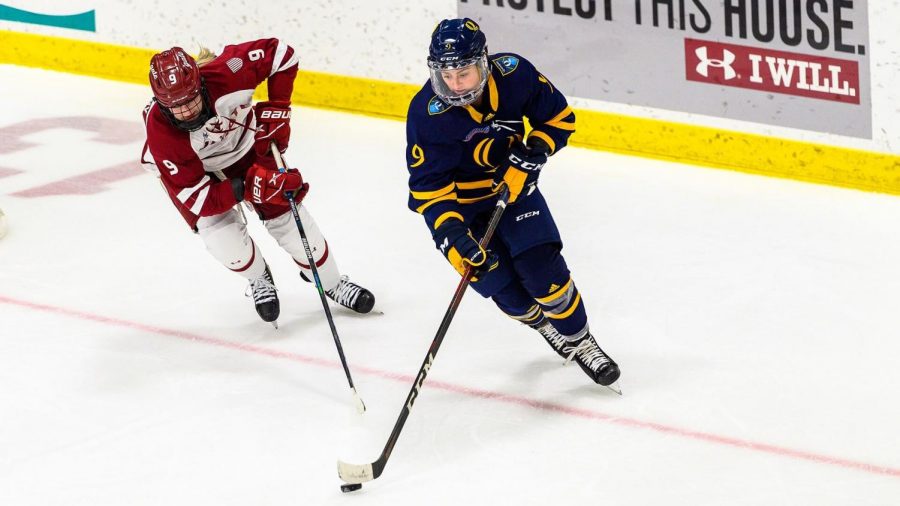 The Quinnipiac women’s ice hockey (3-1, 0-1 ECAC Hockey) team suffered its first loss of the season in the first game of ECAC Hockey play. The Colgate Raiders (5-1-1, 1-0 ECAC Hockey) shut out the Quinnipiac Bobcats 4-0 at Starr Arena in Hamilton, NY.

The game got off to a slow start and was even in the first period. Through 13 minutes, both teams had a combined nine shots.

Quinnipiac junior goaltender Logan Angers kept the Bobcats in the game after a scoreless first period when the Raiders offense began to flare up at the end of the frame, saving all eight shots she faced.

Colgate went to the power play at the start of the second period due to a hooking call on junior forward Katie Huntington but could not capitalize. Angers made four saves to keep the game scoreless, but eventually the Raiders broke through.

After two failed power-play attempts by the Bobcats and another by the Raiders, Colgate scored the first goal of the game. Junior forward Nemo Neubauerova tallied her team-high fourth goal of the season on a 2-on-1 breakaway that she pocketed into the bottom left corner. After two frames, Quinnipiac had the shot advantage, 17-16, along with a 16-14 faceoff advantage.

About halfway through the period the Bobcats got another power-play chance due to a hooking call on Colgate junior defender Tanner Gates. However, they could not capitalize on their third power play of the day.

The Raiders got on the board again with a goal from sophomore forward Danielle Serdachny 13 minutes into the period when she netted a quick pass from behind the net when she was sitting on the crease.

After Quinnipiac failed to score on its fourth power play of the game, Colgate busted the game open. Neubauerova notched her second of the game and fifth of the season to extend the Raiders’ lead to 3-0 less than two minutes after Serdachny’s goal.

Sophomore forward Darcie Lappan iced the game with her first goal of the season when she scored an empty-net goal with 2:08 remaining in the game, making it a final score 4-0.

The Bobcats have a quick turnaround tomorrow when they are back in action against the Raiders at 2 p.m. at Starr Arena.