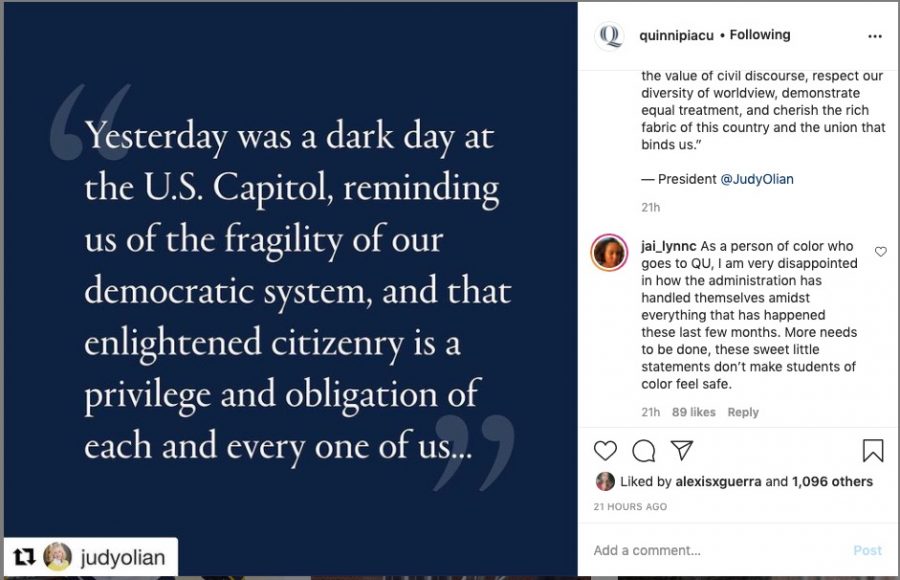 Quinnipiac University students know the drill. A major event occurs — a presidential election, the murder of a Black man by police, a sexual assault near campus, the United States Capitol being raided by an angry mob — and a few hours or days later, they receive an email or a social media notification from the university.

“The bedrock of our republic is the will of the people. I do believe that in the days and months ahead, we will come together to heal our divisions, exercise the value of civil discourse, respect our diversity of worldview, demonstrate equal treatment, and cherish the rich fabric of this country and the union that binds us,” Quinnipiac President Judy Olian wrote in a statement on Quinnipiac’s social media pages after the Jan. 6, attack on Congress by President Donald Trump supporters.

But, several Quinnipiac students were not satisfied with this response. For some, the event was traumatic, scary and monumental, so they expressed that the statement left them wishing for something more from the university they call home. Many students began to comment on the Instagram post that contained the statement asking for more. Among them were Jailynn Caraballo, senior journalism and political science major and vice president of the National Association for Black Journalists at Quinnipiac and Sean Stirrup, a senior game design and development major.

“They preach about being accepting and non-tolerant of things, but when they drop statements that are total nothing statements, it becomes hypocritical,” Stirrup said. “Would it really be such a crime to say that the display of borderline domestic terrorism was wrong? Or that an innocent man dying is wrong?”

After George Floyd was murdered by police in May 2020, Olian sent out a statement about the “pain of racism” to all students and faculty.

“As a university built on inclusive excellence, we hold each person accountable for inclusive behavior, and we encourage courageous action,” Olian wrote. “Our community is one built upon trust, openness and civility, that allows for honest conversations about difficult subjects; one that cares for—and helps—marginalized members of our society.”

The statement has since been removed from the university website. Many students of color, as well as some white students at the university, said this statement did not address a solution to racism on campus.

“Have more than just one email,” said Jasmine Brownell, a senior sports management major and pre-law student. “Have conversations. Engage with us. Listen to us. No offense but listening to what the majority race has to say when the minority already doesn’t feel heard makes it worse.”

Brownell, who identifies as a person of color (POC), said these emails have not helped to create a more inclusive environment on campus.

“There were words said and emails sent out about racism but nothing changed,” Brownell said. “The POC on campus, myself included, have been more targeted than ever due to everything going on. Olian can say whatever she wants, but she hasn’t made any real changes.”

In terms of the attack on the Capitol, some students wish the university would make it clear that any student who supported the event, attended the event or attempted a similar event at Quinnipiac would be seriously punished.

“They need to be specific in how they will protect BIPOC and LGBTQ+ students at the school, and make clear consequences for students who condone the behavior of the rioters at the Capitol, but also racist and homophobic behaviors,” said Samantha Giuliano, a freshman political science major.

Not all students agree that Quinnipiac has an obligation to do more, however.

But for students who were traumatized or upset by the event because of the presence of confederate flags and other racist symbols, they say this is just another example of Quinnipiac falling short.

“Actually address racism and support students of color in their statements,” said Mary Gerendich, a senior political science and criminal justice major. “Answer students of color when they have concerns and want to be heard. Amplify the voices of students of color and show them they are heard in every aspect of their being.”