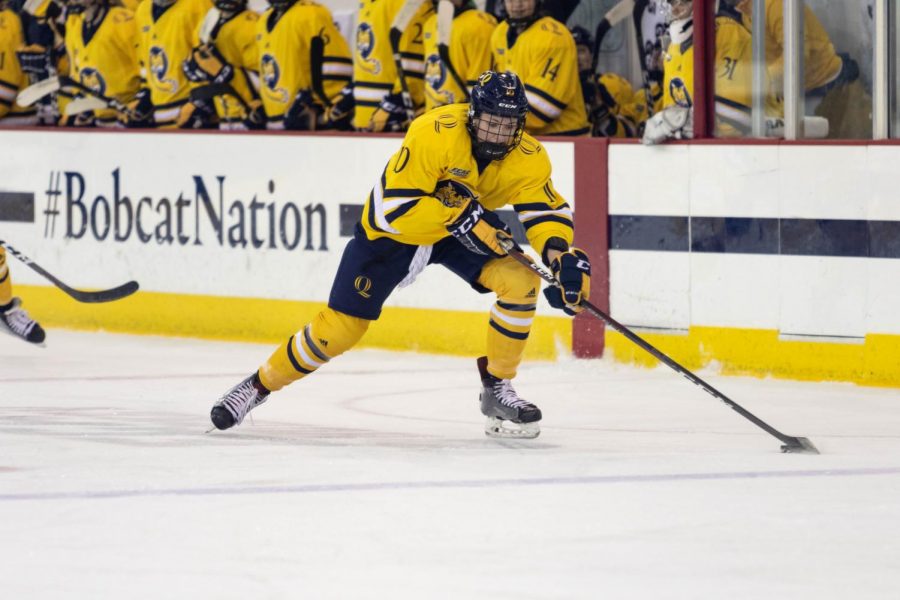 The Bobcats’ offensive outbreak to start the season continued on Sunday as the Quinnipiac women’s ice hockey team defeated the Long Island University Sharks 6-0 at the Frank Perrotti Jr. arena in Hamden. Quinnipiac (3-0) has scored 21 goals in three games to start its 2020-21 campaign and has had five different goal scorers in today’s win against LIU (3-0).

“I loved the depth in our lineup today,” said Cass Turner, Quinnipiac women’s ice hockey head coach. “I really like what we’re able to see top to bottom, it was a lot of fun to be a part of.”

The Bobcats displayed that depth today with senior forward Grace Markey starting the scoring with a short-handed breakaway goal eight minutes into the first period.

“Right before the draw I was trying to keep it light on the penalty kill,” Markey said. “I said to Bonnie (senior forward Brooke Bonsteel) ‘let’s get a shortie here,’ just kind of joking around, then the puck squirted free and I looked behind me and took it down and kind of blacked out from there.”

Shortly after Markey scored her second goal of the season, freshman forward Maddy Samoskevich got her first career goal in her first NCAA game. Samoskevich is the younger sister of former Bobcat and 100-point club member Melissa Samoskevich.

“It was such a cool experience,” Samoskevich said. “Having my first goal was probably one of the best feelings I’ve had in my whole life. I don’t think I would have wanted to go through that special experience with any other team. It was awesome, I loved it.”

The Bobcats did not score again until halfway through the second period, when senior forward Laura Lundblad got a power-play goal for her first of the season. Despite having over 30 shots through a period and a half, the Sharks stayed in the game thanks to strong play from sophomore goaltender Kenzie Harmison.

“I thought we were OK on the power play,” Turner said. “What I did like is that we went to the net, and we were ready to rebound. There were a lot of pucks loose around the net that we just didn’t quite get a handle on. I thought we were jammed a little too much near the net at times, and forced plays to the net when another pass or a little more composure would have helped us.”

The Bobcats had six chances on the power play, but Lundblad’s goal was the only time they capitalized on the advantage.

To start the third period, sophomore defender Kate Reilly rocketed a wrist shot in front of the net on a strong pass from freshman defender Kendall Cooper.

Markey then got her second goal of the game when the Bobcats displayed a quick tic-tac-toe passing sequence that left the net wide open. Senior forward Renee Saltness found freshman forward Nina Steiguaf, who hit Markey with a tape-to-tape pass for the fourth goal of the night.

“The experience I’ve gained has been huge,” Markey said. “Our team is really good about giving each other confidence this year. I give it to other players and they’re giving it back to me, so with that and the depth that we do I think we have a lot of confidence all around.”

On the defensive side of the ice, each Quinnipiac goaltender played a period of action. Sophomore goaltender Logan Angers got her third start of the year but later rested to give the younger goaltenders some action between the pipes. Freshman goaltender Katie Boudiette played the second period and sophomore goaltender Allie Kelley played the third, maintaining the combined shutout.

“We have depth through our lineup,” Turner said. “Goaltending is no different, and looking at how the goaltenders have been battling in practice that’s what led us to that decision. We wanted to give them all a look, and I think they all performed.”

The Bobcats continued their scoring tear late in the game, as sophomore forward Alexa Hoskin put home a rebound from Lundblad to secure the victory. The Bobcats finished the game with 53 shots on goal, while the Sharks had just 16.

The Bobcats start conference play on Jan. 9, at Colgate.