A satirical year in review 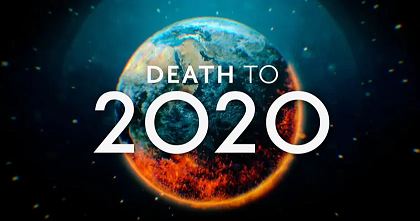 Looking back on 2020, there isn’t just one memory that comes to mind. Rather, it’s a flurry of events like lockdowns, elections and the world (sometimes literally) burning.

“Death to 2020” is a mockumentary-style film starring Samuel L. Jackson, Lisa Kudrow and many more well-known actors that attempts to capture the chaos of the year. It is told through the eyes of Queen Elizabeth II, a journalist, a scientist studying coronavirus and even ordinary people. When combined with real news clips from the year, the film creates a colorful image of a chaotic moment in history.

While “Death to 2020” is satire, the events that it talks about are all covered factually. What really makes the movie satirical is the characters we see the events through, such as Kumail Nanjiani’s character Bark Multiverse. Multiverse is a technology billionaire that, upon hearing Greta Thunberg’s warnings of the climate crisis, hollows out a mountain and creates a survival bunker. From his bunker, Multiverse hopes to radicalize anybody within the first five minutes ofsocial media use.

One thing that I particularly enjoyed about the film is how the United States is seen almost like a “main character” of the movie. While in an ordinary documentary I might find this problematic, I think “Death to 2020” shows how chaotic living in the U.S. was this year between the COVID-19 pandemic, the 2020 presidential election, the surge in support for the Black Lives Matter movement and the intense rift between left and right political ideologies.

The main portrayal of such a divide comes through Cristin Milioti’s character, Kathy Flowers. While Lisa Kudrow’s Jeanetta Grace Susan is a conservative member of President Donald Trump’s administration, Flowers, an ordinary woman, paints an image of Republicans in Trump’s America.

Flowers is a “self-described regular soccer mom” who has taken to extreme right-wing ideologies this year. She is portrayed as a “Karen-esque” woman who is often filmed questioning Black people in a subtly-but-not-so-subtly racist manner.

Flowers also frequently voices her doubts about the safety of a COVID-19 vaccine, claiming that the virus was created so that Bill Gates could insert microchips into her body through a vaccine of his creation. While this is a belief that some Americans hold, Milioti’s portrayal of Flowers shows how laughably absurd that line of thinking is, as technology is already used to track people in a significant way.

I enjoyed the subtle nods to less significant events in the course of 2020, such as Queen Elizabeth referencing the Netflix series “Tiger King” and pretending she did not know who Prince Harry and Meghan Markle were after they stepped down as senior members of the Royal Family early in the year. While these events aren’t going to be important in retrospect, it made me chuckle at some of 2020’s lighter moments.

Obviously, there are things that I think the movie could have done more with, such as social media, which is only briefly touched upon in reference to Facebook conspiracy theories and TikTok users selling out Trump’s rally in Tulsa, Oklahoma. Social media is where most of this movie’s target audience gets their news from, so it would have been nice to see a few more references to it overall.

Regardless, “Death to 2020” is one of the funniest movies that I’ve seen this year. I found myself being able to find humor in some of the painful memories that our society has experienced, which I did not think I would be able to do. I highly recommend watching “Death to 2020,” especially if you need a good laugh.