Ever torn an ACL? How about two? 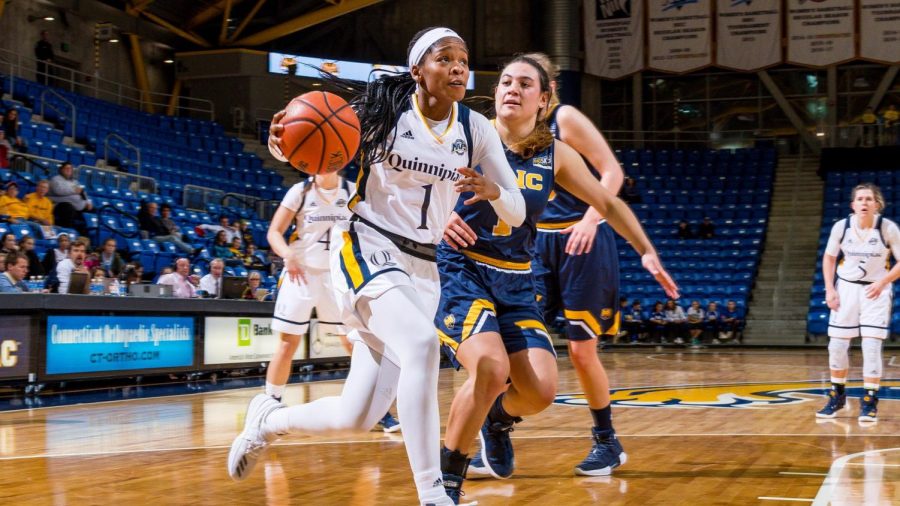 You know that face when you hear that pop?

New York Giants running back Saquon Barkley heard his knee pop during Week 2 of the NFL season. Immediately after going down, a look of fear, pain and grief was plastered on his face. Later that day, he was diagnosed with a torn ACL and missed the rest of the season.

This is a face we see far too often in the sports world.

Redshirt senior guard Vanessa Udoji has been there. In her true freshman season with the Quinnipiac women’s basketball team, she took some time to get used to the Bobcat system, averaging only 8.4 minutes and 3.2 points per game (PPG). However, she made her case on the defensive side, proven by her steal total of 15 that year. The season ended with her logging her 219th minute, including three games with over 20 minutes.

Going into the next season, despite only being a sophomore and a part of a loaded backcourt featuring former Bobcats Carly Fabbri, Edel Thornton, Aryn McClure and Taylor Herd, the coaches saw something in her. That’s why in her sophomore season, she played more than 24 minutes in the first five games of the year.

“Getting that confidence from the coaching staff and them putting me in that position meant everything to me,” Udoji said. “It felt really good, it gave me confidence on the court knowing that my teammates and coaches wanted me in the position I was in.”

She heard the pop.

During the rehab process for her first torn ACL, she suffered a torn ACL in her other knee, putting a huge spanner into the short-term outlook of her basketball career.

“It was another setback, but like they say, ‘God gives his toughest battles to his strongest soldiers,’” Udoji said. “Obviously you have moments of questioning it, but the only way is through. You can be upset and it can ruin your spirits for a little bit, but after a while you know that you have the opportunity.”

Even through an injury like what Udoji went through, the persistence of a Division I athlete keeps them grounded. Talk to any of Udoji’s coaches and you’ll find that her spirits during team activities never faltered.

“It was really evident when Vanessa couldn’t be on the floor that she was doing rehab or she was off doing something with (athletic trainer) Becky (Mella), we missed her voice, there’s no doubt,” said Brian Wilson, women’s basketball assistant coach. “The day after she went down again, it just felt different. There was something missing and that was her presence, her voice, her experience. That I think really affected us last year.”

The most important part of her presence was her connection with the younger players on the team. Now in her fifth year of NCAA basketball, she’s seen pretty much all there is to see.

“I think there’s no better way of learning than learning from someone who’s been in that experience before you,” Udoji said. “That’s how our team has always been, kinda having the upperclassmen teach the underclassmen. I think we’re always willing to learn from each other.”

And then the time came. She received clearance from the medical staff to return to the court. Everything fell into place and the stadium announcer said her name for the first time in years. Udoji was as cool as could be.

“I tell myself, ‘This is what you’ve been preparing for. All the days, all the practices, all the workouts, all the tears, this is the moment that you’ve been anticipating. Just play, have fun, leave it all out on the floor,’” Udoji said. “Because one thing I’ve learned since the injury is to not take anything for granted.”

Now that Udoji is back on the court at last, she’s taken on a new role. The new age of basketball has put an enormous emphasis on scoring. It’s expected of a guard to go out every night and put up shots left, right and center.

But Udoji has a different approach to the game. It helps that the Bobcats have four guards this year who have already scored over 50 points only six games into the season, but Udoji’s emphasis lies elsewhere.

She wants to be a pest on defense.

When she described how excited she was to get back on the court, she didn’t once mention scoring her first basket in almost three calendar years. She said she wanted to “disrupt the opponent’s offense.”

This isn’t something you see often in basketball. An unselfish, veteran player who has just come off of two catastrophic injuries and doesn’t care about scoring. She just wants to show the other teams in the Metro Atlantic Athletic Conference (MAAC) that when they play the Bobcats, their best player will have the nightmare of matching up against her.

Wilson understands that this is an underrated trait in a player and commends Udoji for having that mindset.

“A lot of what Vanessa brings defensively isn’t gonna show up (in the box score). The steals obviously will but the deflections don’t show up,” Wilson said. “No one in the media is charting or talking about her ball pressure, or how she denies a pass on the wing, but we certainly recognize those things. Vanessa just has a physical ability that not a lot of players do.”

Udoji endured one of the toughest situations an athlete can be in. One torn ACL is debilitating enough, let alone two. But instead of getting down on herself and letting the injuries derail her entire career, she took control.

She came out the other side a different person and a different player. She carved out a niche in the Bobcat system that sorely needed to be filled. Udoji heard two pops in the last few years, but she felt three.

Two of these pops were her knees. Just like thousands of athletes, she heard it go. But the pop she didn’t hear was her popping right back into the middle of the Bobcats’ lineup, culturally and physically. Even though she wasn’t in the lineup to bring that intensity, it was still around. But that moment when she scored her first basket in 1,091 days and the bench erupted for her, was the loudest pop there was.