Jack Harlow is here to stay 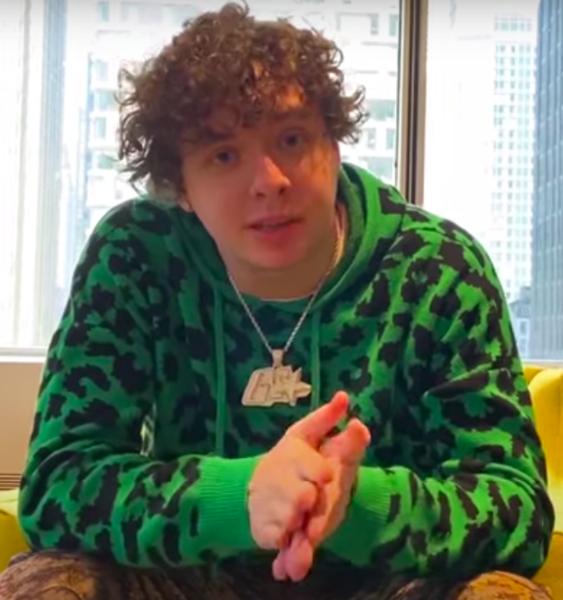 Not many artists have the versatility to incorporate: Lil Baby, Da Baby, Lil Wayne, Big Sean, Chris Brown, Bryson Tiller and Adam Levine all into one album.

However,  that is exactly what Jack Harlow does  on his debut album, “That’s What They All Say,” which released on Dec. 11 with his label, Atlantic Records. Harlow displays a vast combination of rapping, singing and different melodic flows that stretched his comfort zone unlike any of his previous mixtapes. Harlow’s first mixtape came out in 2016, but he has been making at-home music videos on Vimeo with his friends in Louisville since 2011.

The 22-year-old Andy Samberg look-alike from Louisville, Kentucky, has enjoyed a more successful 2020 than most artists out there, kicking the year off with his single, “WHAT’S POPPIN,” which went platinum. He then made a video for the hit with Cole Bennett of Lyrical Lemonade, as well as a remix to go with it. From there, Harlow dropped his EP, “Sweet Action” and gained more traction and popularity than his previous work.

The COVID-19 pandemic hit the U.S. right after the EP’s release, but Harlow kept his head down and began recording his album with his group “Private Garden” which consists of eight close friends who help him produce beats and videos.

This led to the successful release of the single and video, “Tyler Herro,” this fall, which he timed perfectly with the rapid rise of the basketball star Tyler Herro, who enjoyed a breakout rookie season for the Miami Heat. Following the conclusion of the NBA season this October, Herro flew out to Lou Williams’ house, also known as, “Lou Willville,” to finish shooting the video with Harlow.

Harlow was voted to be a part of the 2020 XXL Freshman Class, an annual list done by XXL magazine which consists of ten artists on the rise. In addition, Harlow did multiple interviews with Gentlemen’s Quarterly, better known as GQ, and displayed the most candid version of himself since he began his rap career nine years ago.

There are various since-deleted comments where he talks about how people made fun of him and didn’t understand how he could be a rapper, but Harlow tuned out the noise and stayed the course.

Harlow is used to not being the typical rap artist. He is a tall, somewhat goofy-looking white guy with curly hair and when people look at him, chances are the first thing they’re thinking isn’t, “Oh, he’s definitely a rapper.”

After listening through the album, the one thing that cannot be debated is the mixture of styles and types of instrumentals while each song has a unique pace that all fit Harlow.

He begins the album with, “Rendezvous,” a song that he told GQ he recorded just 48 hours before the album’s release. He wanted to start the project differently than he originally thought, and said to his team around him that, “All the greats are honest.”

He starts it off with a bang, with the opening lines of the album being, “I became exactly what I wanted to, I became a millionaire at 22.” From there, Harlow displays a unique mix of a confident bravado with a frank vulnerability.

He mentions a later track in which he opens up in this intro song, saying, “Track three is where I tell her we gon’ rendezvous.” Here, he is referring to the song, “21C/Delta,” which is the overall theme of the GQ interview, talking about how he fell in love with a bottle girl in West Virginia and opens up about the softer side of himself.

The authenticity and honesty displayed in certain songs is far different than years past, when he had a overly confident attitude since he was trying to be like every other hardcore rapper. Members of his team said to him, “Nobody knows who you are,” which led to Harlow having lyrics like, “I became me when I realized it was OK to,” on the track “Rendezvous.”

The album goes in an entirely different direction with the track, “Face Of My City” featuring Lil Baby. The hard, fast-paced beat is partially who Harlow is, but not the end-all be-all one-dimensional personality of himself. He talks about what it is like being incredibly popular in Louisville, and while he is confident throughout the album, it is clear that is not all he is. This track has a similar confident vibe as the song, “Way Out” feat. Big Sean in which Harlow discusses the life of a famous rapper and has the confidence similar to that of a basketball player in a layup-line listening to music.

In his interview with GQ, Harlow discusses the reasoning for this development as well as songs like, “21C/Delta,” “Already Best Friends” featuring Chris Brown, “Same Guy” feat. Adam Levine and “Luv Is Dro” feat. Bryson Tiller and the late Static Major.

He opens up about himself and his experiences with girls and strays away from a lot of styles he had in past albums where he was just like any other rapper. It seems that he found his uniqueness as an artist without overthinking it and just showed who he is.

“Funny Seeing You Here” and “Keep It Light” have a mixed feel to them, and don’t feature any other artists. These tracks have a short story feeling to them, since Harlow has grown to develop that skill, especially on his last mixtape, “Confetti.”He tells the story of seeing a girl he used to be with at a party in, “Funny Seeing You Here,” and discusses honest thoughts about their past experiences while also trying to play it cool.

This is growth that we haven’t seen from Harlow, who sometimes opened up in the past but not as specific. In the lyrics, “Used to say your man was trash and tell me ’bout the way he’d act, I would shake my head until I realized I’m the same as that, now I wonder, did she tell her man that I’m a trash dude? And would he shake his head until he realized he was trash too?” Harlow displays his own mistakes, insecurities and imperfections here, as well as in “Keep It Light,” when he discusses the difficulty of trying to balance being nice to folks back home and keep things light-hearted with people who either inflate his ego too much or get jealous, a nearly impossible quandary to tackle.

“Creme” and “Route 66” demonstrate Harlow’s growth first-hand. His development is illustrated as he no longer refers to himself as a growing artist like past projects, but instead refers to himself as, “the crem de la crem” on the song “Creme.” He talks about the relationships he has along with mixed feelings on abusing his body with drinking and drugs, since he was clean for a while but says, “It’s filled to the brim” in a celebratory tone since he is now getting where he wants.

On “Route 66” he raps a lot about Louisville and proudly represents his city, and has a fun play on words referring to basketball players while also staying himself saying, “Get bread non-stop, ring a bell like Raja, from the city like Rondo, Rajon, but I’m from the whiteside like Hassan.” There, he confidently discusses his progress while telling a story about being with a girl, and does it through referring to three basketball players, Raja Bell, Rajon Rondo and Hassan Whiteside.

To wrap up the new songs on the album, he ends it with “Baxter Avenue” which comes off like a sequel to the track, “River Road” on the project, “Confetti.” Both tracks end the album with Harlow getting serious over a slower beat and opening up about honest feelings about growing up, family, his progress and life overall. It is more of a deep feeling song that relates to a lot of people and portrays his realness as a human being despite being a confident person.

The album conveys who Harlow is, and it offers a little bit of everything. It is the type of project that has a little something for everyone, and with all the various styles, it seems to be the complete showing of who Harlow is and what he can do, even though he is just getting started.