A bright future ahead 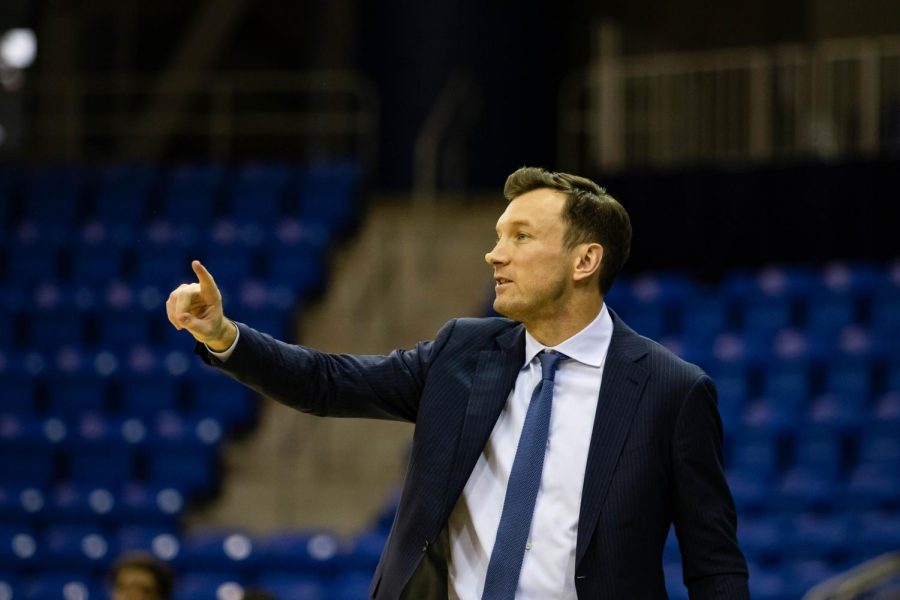 Baker Dunleavy has just begun his fourth year as the Quinnipiac men’s basketball coach and was recently selected to a prestigious college basketball list for the second time this year. He was featured on Seth Davis’ “40 under 40” published by The Athletic, a list that consists of the 40 most influential people in college basketball under the age of 40, including coaches, conference commissioners, broadcasters and more.

“Dunleavy comes from strong basketball bloodlines,” Davis wrote in the piece. “His father, Mike Sr., played 10 seasons in the NBA and was a head coach for four NBA teams. His brother, Mike Jr., played 15 years in the NBA and is now assistant GM for the Golden State Warriors.”

He went on to mention that Dunleavy did not have the same success as a player, appearing in 28 games at Villanova in just three years. But, he got a major head start on his coaching career because of that.

In the ESPN article, it mentions Dunleavy’s history as well as his career at Quinnipiac thus far, in which Dunleavy has a .500 record in MAAC play.

“Dunleavy checks a lot of boxes as a potential coaching star,” ESPN writer Jeff Borzello wrote. “He hasn’t quite broken through with the Bobcats yet though.”

When asked about receiving a spot on Davis’ list, Dunleavy had a modest response.

“I think part of the reason for that may be the lack of youth coaching in college basketball,” Dunleavy jokingly said. “But it is a great honor and I am really appreciative of it, and I think I owe a lot of that credit to the guys I was around prior. It obviously helps learning from Jay Wright and having guys on our team like Jalen Brunson who were so successful.”

Quinnipiac assistant coach Shaun Morris has been at Quinnipiac for three seasons, and he believes the nod says a lot.

“I think it was a great recognition for not only coach (Dunleavy) but the program,” Morris said. “When you’re part of those discussions, you’ve got to be a part of a program that has seen growth in whatever way you can determine as their success. I think right now with coach (Dunleavy) as the face of the program, we’re definitely moving in the direction.”

Senior forward Jacob Rigoni has been with Dunleavy during his entire tenure as head coach, so he wasn’t surprised to see him receive this recognition.

“After getting to play for coach (Dunleavy) the past three seasons, he definitely deserves it,” Rigoni said. “He has helped so much and is so reliable and consistent and has a connection with us players beyond basketball.”

Dunleavy has had glimpses of success at Quinnipiac but said there is still work to be done after only a few seasons.

“I think we’re still trying to establish our identity,” Dunleavy said. “After three years, we’ve definitely taken steps in the right direction, but there is still a lot to be done in terms of having an established culture and living up to the style that we preach with attitude.”

Dunleavy got close to a MAAC title in the 2017-18 season when the Bobcats lost to Fairfield in the semi-final of the conference tournament. He has not won a game in the MAAC tournament since his first season after a first-round exit to Monmouth in the 2018-19 tournament. The COVID-19 pandemic canceled the tournament during the 2019-20 season.

When discussing taking the next step to get Quinnipiac men’s basketball to its first NCAA tournament appearance in program history, Dunleavy preached having a dedication to the process as well as getting the right players. The team also had significant hurdles such as notable departures that have created holes in the roster that need to be filled this season.

“We have obviously had a lot of roster turnover recently,” Dunleavy said, referring to guard Rich Kelly transferring to Boston College, and forward Kevin Marfo going to Texas A&M. “In the big picture, we are trying to grow a consistent program with the right guys who buy in, which obviously takes time, and while we’ve trended in the right direction, there is still a lot to be done.”

The recent transfers have opened up a window of opportunity for players such as Rigoni and freshman guard/forward Tymu Chenery to step up.

Despite COVID-19 already providing the Bobcats season uncertainty with a pause in activities to a positive case, the Bobcats are maintaining the same mindset they always have when it comes to attitude and improving the program.

In addition to the turnover in the offseason, the Bobcats continue to face a challenge with COVID-19. Yet, still, they maintain their philosophy and mindset.

“Ultimately, he wants to build this thing the right way,” Morris said. “With how they’ve done it at Villanova, they are one of the most respected programs in the country right now. The discipline, unselfishness and attitude mantra that we use here making the entire program bigger than each individual person is how we want to achieve our success.”