Nothin’ but nylon: Getting all caught up 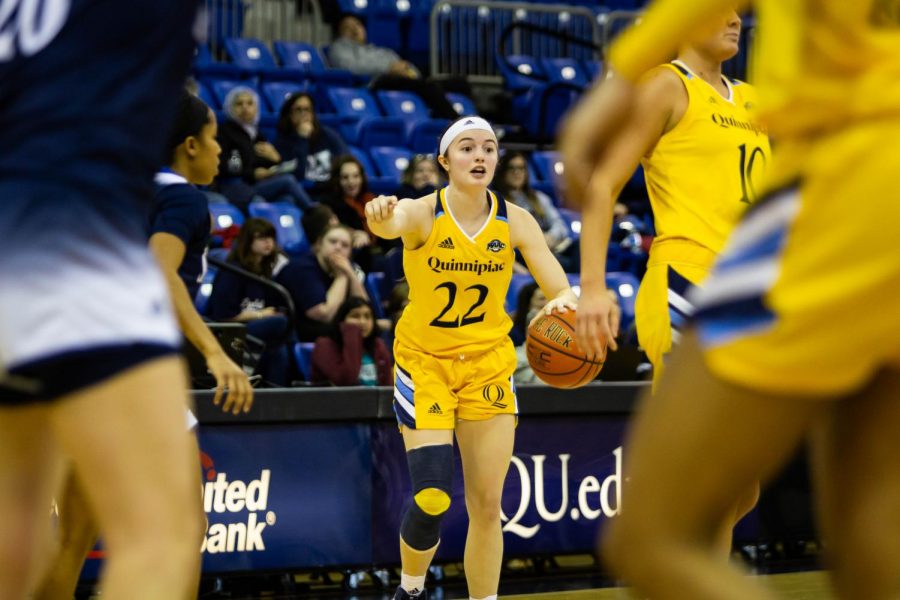 Are you a little late tuning in to this year’s season? Have you missed the first few games but want to get up to speed now that conference play started on Dec. 18?

That’s alright, we’re in the same spot. If you’re trying to catch up but don’t have the time to look through what the women have done so far this year, don’t sweat. I’m here to help.

As with anything this year, the team has been affected by COVID-19. Over the past five years the women have played an average of 10 out-of-conference games each season, but this year they only squeezed in four, going an even 2-2. It’s the third straight year the team will enter conference play at or below a .500 winning percentage, having not done so since 2013-14 before this streak.

The team is scoring 62.6 points per game (PPG), down from the 66.6 it averaged last season. Last year’s leading scorer and starting point guard Shaq Edwards, now a senior, has only appeared in two games, but others have stepped in nicely during her absence.

Junior guard Rose Caverly is averaging 12.4 PPG thus far, and sophomore forward Mikala Morris is pouring on another 13 PPG herself. Backcourt partner and junior Mackenzie DeWees is averaging 10.4 PPG. The Bobcats have three double-figure scorers for the first time since 2017-18.

“It’s nice having four girls that are threats around me, because then they open it up for me too,” Caverly said. “You can’t leave anybody on our team open … so that opens it up for me. Everybody else on the team (is) doing their job, and then it just kind of comes easy.”

Despite more production from the top, overall scoring is still down. This is in part due to the efficiency, or lack thereof, that Quinnipiac is scoring with. The team is shooting 35.5% from the floor, down from last year’s already unattractive 38%. From downtown it’s worse, with the team shooting just 28.4% from behind the arc, also down from last year’s unenviable 29%.

One way to solve efficiency issues is to get to the free-throw line, but the Bobcats are struggling there, too. Taking just more than two fewer free throw attempts per game this season than last, the Bobcats are making 13.6 per game compared to 14.1 last year. A bright spot? Those numbers are good for over 70% from the line, up from last year’s 67%. If the Bobcats can get to the line more often, they’re poised to capitalize on their opportunities.

“(Head coach Tricia Fabbri) always says we need to finish through contact, and if a play breaks down, get yourself to the line because that’s two points right there. We do stress it, a lot of times we just haven’t been getting calls,” Caverly said laughing. “Or we take shots early in the shot clock, but she does definitely stress that. Especially when we work the ball into (Morris) in the post, she should be getting to the line a lot more. Hopefully during conference play we’ll get a lot more calls and get to the line because that’s easy points right there for us.”

Staying on the offensive side of the ball, Quinnipiac is committing fewer turnovers so far this season than last. It might be tricky to keep this going as conference play continues since opponents are going to be more familiar with the team’s style of play, but if that number stays right around the 12.8 per game it’s at now the Bobcats should be able to stay in almost any game.

The biggest difference for the Bobcats on defense is their ability to force missed shots this year. Teams shot a 43/36/66 split against the Bobcats last season, but this season those numbers are down to 40/31/64. If the team can keep opponents struggling from the field then there’s no question it can keep its positive scoring margin throughout conference play.

“That was our big focus all preseason, coach Fabbri was stressing defense,” Caverly said. “She was like, ‘I don’t care about offense right now, offense will come from defense.’ But we really need to be a better defensive team than last year and so it’s just been all the reps in practice that we’ve done. And we got that chemistry on defense that is carrying over into the games. We talk to each other, we know where each other are, we know where to help. For the first three months here pretty much all we did was defense, so we were definitely prepared for it.”

With only five games having come and gone, it’s important not to run away with any of these early takeaways. Trends are starting to form, but as the team continues getting in more reps and building from one game to the next we’ll be able to see which of these early season accomplishments are here to stay and which were a mirage.

The Bobcats look solid early on, with big contributions coming from younger players as they continue to gain more experience. Players like Caverly, DeWees and Morris have looked strong so far, and if they can keep up their level of play in the MAAC the team has a legitimate shot to make a deep postseason run.

And who knows, maybe they even win their fifth MAAC tournament.

“Last year wasn’t the best year for (us),” Caverly said. “But we were still very competitive in the MAAC and we want to get back to the top and make a statement that we’re still here and just because four great players, five great players graduated, that Quinnipiac basketball is still leading the MAAC.”