NBC’s, ‘The Voice’ (and America) have a race problem 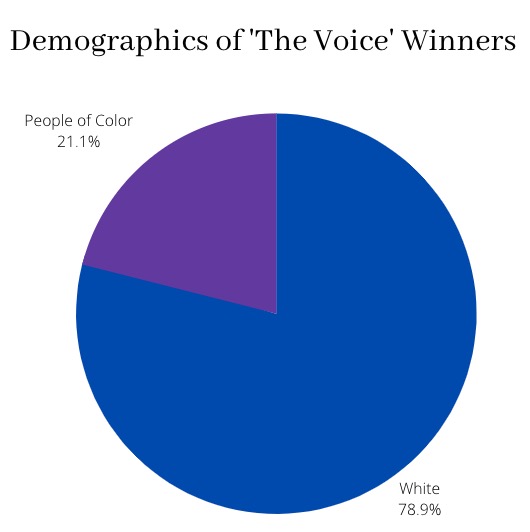 “The Voice” crowned its 19th winner last night — 15-year-old Carter Rubin of Team Gwen. While the night was historic because Rubin became the youngest male to ever win the show, it was also predictable. Of the 19 “Voice” champions, Rubin is one of 15 white champions.

What is going on?

First, it’s important to note who chooses the finalists. While leading up to the finale, the coaches on the show have a chance to save singers and decide who advances to the finale, ultimately, the viewers vote for the winner of “The Voice.” The viewers are able to cast votes on “The Voice” app and on the website. So while coaches are regularly picking singers of color to advance to the finale, time and time again, the voters are not sending them to victory.

One possible reason could be that on “The Voice,” there has been very rarely more than one coach of color at a time. For example, in Season 19 that just wrapped up, John Legend was the only coach of color. The other three were white. This was the same in all of the seasons except for about five seasons when combinations of Shakira, Jennifer Hudson, Usher and Pharell Williams lined up.

The lack of consistent coaches of color may have deterred some people of color from tuning into the show and voting for more diverse winners.

Another possibility is simply the loyalty of the country music viewers on the show. Blake Shelton, a country singer, is the only coach to be on the show for all 19 seasons, and he has won seven times — more than any other coach.

The show’s focus on country music, a genre which has ties to the antebellum south, may also deter Black viewers who yearn to listen to music that is a better representation of them.

Either way, I am deeply disappointed by this pattern of Americans electing white people as the winner of “The Voice.” The fact that only one woman of color has won “The Voice” in 19 seasons is very sad and scary. The fact that this happened in 2013 is even scarier. The last seven winners of the show have been white. This is just unreasonable given the number of people of color that made the finale.

Last night, I cast my vote for Holiday, the fifth place winner. Holiday is a professionally trained opera singer and voice teacher at a university, but he is not a textbook singer and doesn’t just stick to opera. He sang a breathtaking version of Beyoncé’s “Halo” for the finale show that should have motivated America to vote for him.

On top of Holiday being a Black man on the one Black coaches’ team, he is openly gay. Did that play a role in why he came in fifth  — last of the finalists? I do not know. What I do know is that the American people that shy away from female presidents and have only elected one Black president despite our population being nearly 50% people of color are the same American people electing “The Voice” champion.

What is my recommendation? Since NBC can’t singlehandedly cure racism, if “The Voice” wants to diversify viewership and the winners, it needs to bring on a more diverse coaching staff. I love Shelton, but he’s been there forever. Let’s bring in Jimmie Allen, a young Black country singer who is breaking barriers in the genre. How about Lizzo? Megan Thee Stallion? There are a multitude of brilliant artists of color to choose from.

I am writing this article not because I have all the answers or because I think Rubin doesn’t have a great voice. He does.

I am writing this article because deep down I feel that the reason singers like Holiday lost has something more to do with their skin color than their singing voices. And that’s just not OK.