Book of the Week: ‘Surviving Autocracy’ 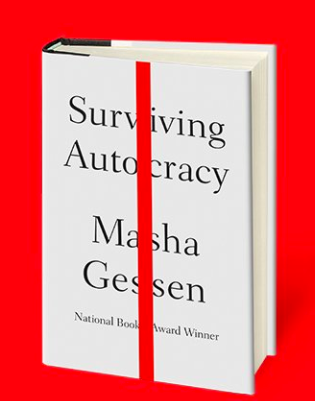 I am a person who reads a lot of dense, textbook-like literature. And if you aren’t a big fan of textbooks, chances are, you aren’t going to pick up the books I recommend.

But pick up this one.

“Surviving Autocracy” by Masha Gessen, a Russian-American journalist, completely changed my perspective on the years since the 2016 presidential election. Gessen criticized the way journalists and everyday people attempt to talk about President Donald Trump in democratic terms such as “election,” “Constitution” and “accountability.”

They argued that using language that we would have used to describe other presidencies when referring to Trump is dangerous because of how it normalizes his tenure in office. Gessen, a scholar of Russian history, likens Trump’s time in office to an autocracy and to refer to it as anything else is to change the trajectory of our country and pretend that blatant violations of democracy still constitute democracy.

As a journalist, one particular moment of autocracy mentioned in the book stuck out to me. Gessen reflected on a Thanksgiving press briefing with the press secretary at the time, Sarah Huckabee Sanders.

“‘That goes without saying,’ she added, in a tone that made it clear that the White House press secretary really does not like the White House press corps,” Gessen wrote. “There was slight, uncomfortable laughter in the room. Then Sanders listed the people and things for which she was actually grateful: her family, her faith, the military, the police, the firemen, and the first responders.”

Then, Sanders went around the room. Each reporter tried to quickly say something like “my family” and then transition to a question of substance about North Korea, or something that actually mattered to their job.

“John Gizzi, of Newsmax, was thankful ‘for the position I have and the colleagues who are my friends. I’m thankful for my father, ninety-six years old and going strong, and to my wife, my heroine, thankful to her for saying yes on the fourth request.’ There was laughter. ‘My question is about Zimbabwe.’ Much more laughter,” Gessen wrote.

Sanders characterized this as the “best pivot I have ever seen” and then breezed past his question by saying that the administration had no comment on the relationship with Zimbabwe. With that, the briefing was over.

As Gessen retold this briefing, I became angry. We’re reporters. We take our job seriously. We come prepared with questions that we have pored over and reworded multiple times. We are not there to engage in a friendly exchange of thankfulness that really is a show of power on Sanders’ part.

And yet the severity of this moment completely left my consciousness. I barely remember Sanders let alone this specific briefing. I allowed this startling moment to become normalized.

“The press secretary had enlisted the reporters’ help in mocking the purpose of the briefing; no information was conveyed from the White House to the public,” Gessen said. “She had shown who was boss: she could hold journalists to an arbitrary rule by making them offer thanks before asking a question, which diminished the journalists’ ability to hold her to the task of answering their questions.”

This is not the most frightening example of Trump’s autocratic governing style, but it is certainly the one that made me rethink my role as a journalist in all of this. When Trump banned Jim Acosta from the briefing room and rescinded his press pass, it seemed like a petty fight at the time. But in reality, it was a power grab. It was a reminder that in Trump’s America, the press is no longer an independent check on power. They too must tiptoe around the president.

There were countless examples laid out in the book of Trump’s autocratic and dangerous style of governing. Another that stuck out to me was when Trump named the European Union as America’s greatest foreign adversary, rather than the autocracies of the world like Russia and North Korea.

The scariest part is that journalists write about and cover Trump’s presidency as if it is a presidency — as if we were covering someone who didn’t more closely resemble Vladimir Putin than he resembled Barack Obama.

Gessen’s book reminded me of so many of the instances throughout the past four years that disappeared in the constantly churning news cycle as if they never happened. But autocratic leaders want us to forget such injustices. They want to make us think everything is normal.

In order to survive autocracy, it is up to us to remember these instances and call them out for what they are. Read this book because while Trump has lost, autocracy in America isn’t dead yet.