Three in the Key: Is this actually happening?

Quinnipiac men’s basketball prepares for an unprecedented season, if COVID-19 allows for it 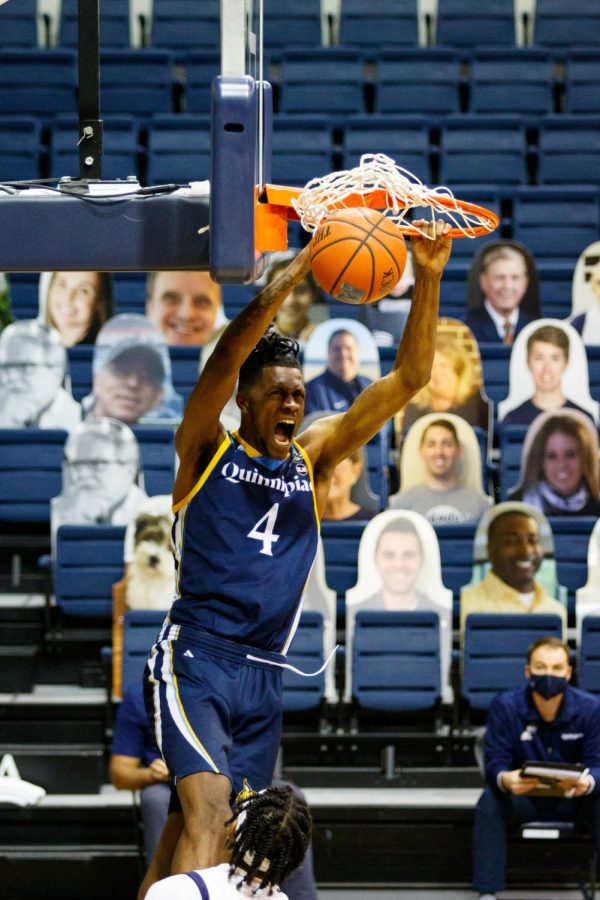 Sophomore center Seth Pinkney is expected to have a bigger role for the Bobcats this season.

Ever since the 2020 Metro Atlantic Athletic Conference (MAAC) Tournament in Atlantic City was canceled in March, players, coaches, fans and reporters alike awaited the conference’s return in the fall.

Well, here we are. College basketball begins tomorrow, Nov. 25, which marks the first games since the COVID-19 pandemic struck and forced an NCAA-wide cancellation.

While some conferences such as the Patriot League are postponing play until January 2021, others are allowing out-of-conference games to take place. As for the MAAC, roughly half of the teams scheduled non-conference games, while everyone will take part in a 20-game double round-robin conference schedule.

The Quinnipiac University men’s basketball team, who finished last season 15-15 overall and 10-10 in league play, is one of the MAAC teams with out-of-conference games slated. It’s scheduled to play its season opener on Wednesday, Nov. 25, against Fairleigh Dickinson University. But can anyone be sure that the Bobcats will set foot on the court?

Of course not. It’s merely impossible to see into the future.

In a sense, the uncertainty is reminiscent of the 2020 MAAC Tournament in Atlantic City where the Bobcats did not play due to COVID-19. Nearly nine months later, the virus remains rampant as the Bobcats look to play their first game since March 4.

“Obviously, (a) unique season to prepare for, but we’ve had a successful fall,” Quinnipiac men’s basketball head coach Baker Dunleavy said on the MAAC media call on Nov. 9. “And it’s been really enjoyable to have our guys back on campus working out and getting back to some sense of normalcy after not seeing them all summer.”

In addition to the challenges presented by COVID-19, the Bobcats have their own set of obstacles to overcome. They lost arguably their two best players to the transfer portal after last season. Rich Kelly and Kevin Marfo, both graduate students, transferred to Boston College and Texas A&M, respectively.

Additionally, graduate student forward Aaron Falzon finished his collegiate basketball career, so he won’t be playing for the Bobcats. He poured in 7.8 PPG and was a consistent player in the rotation, starting 16 games and playing 24 minutes per game (MPG).

Quinnipiac endured a similar situation prior to last season when 2018-19 MAAC Player of the Year Cameron Young graduated. Young, a guard, averaged 23.5 PPG in that season, and Dunleavy knew that one guy wasn’t going to score 23.5 PPG more to fill that void.

The Bobcats face a greater challenge now, given the loss of three of their regular starters. Rather than filling one monumental spot, the Bobcats have to find successors for three starters, two of whom were named to the 2019-20 All-MAAC Second Team.

The Bobcats, who were ranked seventh in the MAAC preseason poll, are going to need a team-wide effort to compensate for the roster’s turnover. However, junior guard Tyrese Williams and senior forward Jacob Rigoni will be looked upon as leaders of the pack. The two were named to All-MAAC Preseason teams with Williams making the second team, while Rigoni earned a spot on the third team.

“We’re really excited about the returners that we have,” Dunleavy said. “You mentioned Tyrese Williams and also Jacob Rigoni, two guys that have started close to every game in their career for us as juniors and seniors now ready to lead the way.”

Williams and Rigoni were third and fourth on the team in PPG with 9.9 PPG and 8.6 PPG, respectively. The two are supported by a mix of freshmen, sophomores, juniors and first-year transfer students.

Alongside Rigoni in the frontcourt, sophomore center Seth Pinkney is likely going to see more minutes. The 7-foot-1 big man played 11.1 MPG last season and started just one game. He primarily backed up Marfo, but with no clear starting center, Pinkney’s minutes could shoot up significantly.

Sophomore guard/forward Brendan McGuire also returns and will likely see minutes in the frontcourt, but because of his guard-like nature, he may continue to see many ball handling opportunities like last season. In terms of new names to the rotation, JJ Riggins, a redshirt freshman forward, Elias King, a sophomore forward, and Tymu Chenery, a freshman guard/forward, may find time in the rotation.

“(Lewis) is a super talented, young guy who I think is going to be able to surprise a lot of people in his ability to impact our team,” Dunleavy said. “And then we have some other guys (in) that same year: Matt Balanc, Tyree Pickron, some guys that are chomping at the bit to be more involved and take bigger roles. So, I’m really excited about watching them do that and even more excited to have the chance to build our team here.”

With the immense roster turnover, the Bobcats’ offensive strategy may change. Last season, they shot 29 3-pointers per game and made 10.3 of them per game, which was sixth and fifth in the NCAA, respectively. They also lost Falzon and Kelly, who were critical reasons to why the Bobcats were so lethal from distance. Falzon shot 34.8% and Kelly shot 39.4% from behind the 3-point line.

That loss and the necessity to help box out Marfo on the boards allowed for many 3-point opportunities for the Bobcats.

This season, Dunleavy believes those chances are going to come differently due to Lewis’ ability to drive to the bucket.

“Certainly, I think, we’re going to have the benefit of having a point guard, whose greatest asset is his ability to get into the paint,” Dunleavy said. “When you have that, I think your spot-up shooters will benefit. But we also lose a point guard in Rich Kelly, who’s maybe one of the best shooters, I think, in the country.

“Just because Savion isn’t the same shooter as Rich, are we not going to be as dangerous from three? That’s a trade-off we have to be able to make work for us. I think Savion, like I said his ability to get into the lane, will actually make it hopefully easier for guys like Tyrese Williams and Jacob Rigoni to get more (3-pointers).”

Given the roster turnover and raging pandemic, Dunleavy has a unique set of challenges heading into the season. That said, he knows some things are just out of his command.

“It’s more than ever a ‘control what you can control world,’ and that’s what we’re trying to master the best we can as a program,” Dunleavy said. “Do what we do, control what we can control and kind of keep that focus moving forward the best we can. But it’s hard not to daydream and think about all these outside factors that you don’t control, and you got to just almost prevent yourself from doing it.”