Putting an end to the ‘war on drugs’ 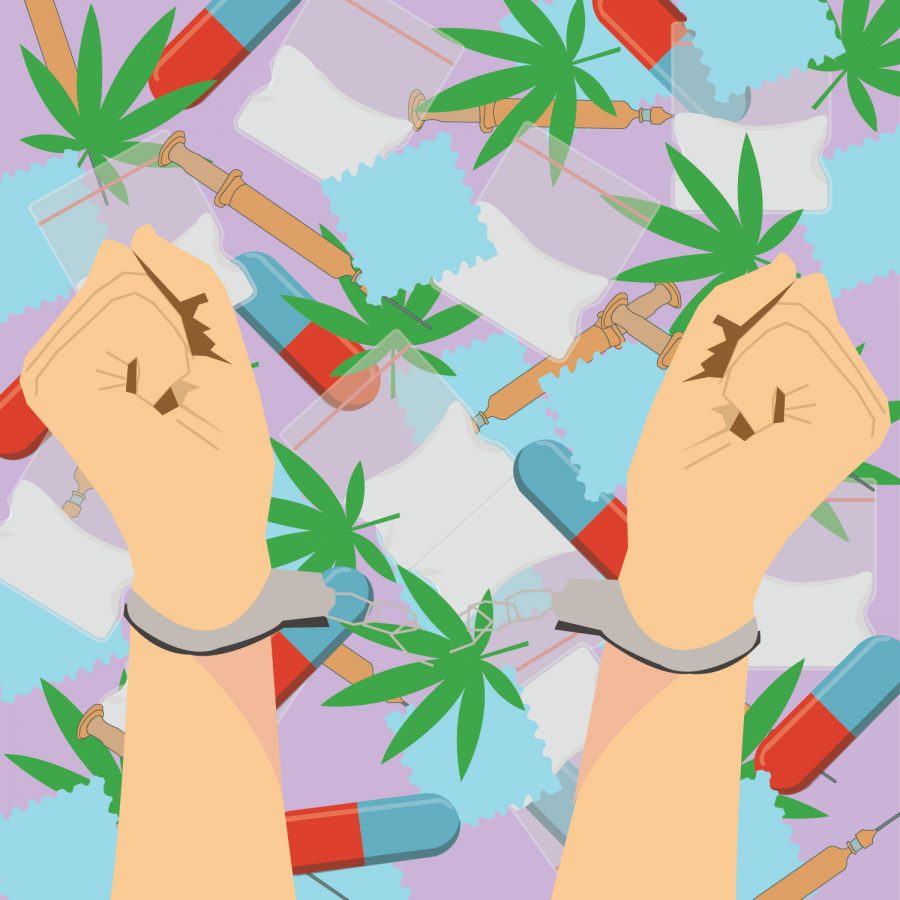 In June, comedian Eric Andre released a comedy special on Netflix called “Eric Andre: Legalize Everything.” The stand-up show was terrific and filled with ridiculous jokes.

Months later on Election Day, I was reminded of the chaotic comic. Oregon made headlines by decriminalizing the possession of heroin, methamphetamine, LSD, oxycodone and other hard drugs. It’s a huge step toward reversing the “war on drugs” started by former President Richard Nixon in 1971.

The “war on drugs” was nothing more than a thinly veiled racist agenda meant to setback the Black community for decades by instituting harsh punishments for drug offenses. Victims were arrested and beaten instead of being helped. It’s a major reason why the United States, the land of the free, is the world leader in incarceration.

Oregon decriminalizing the aforementioned drugs is an example of this shift that has happened with other states. Arizona, Montana, New Jersey and South Dakota all legalized marijuana for recreational use. Washington D.C., decriminalized psychedelic plants.

In the words of Andre, legalize everything.

Luckily, these trends show that people want reform. They recognize the damage that the “war on drugs” campaign had on this country, and these are good steps toward reversing it. These rulings don’t mean that you can buy heroin at the local CVS. It means that you won’t spend at least five years in prison for being addicted to it. The system used to prey on and punish those most vulnerable — now it changes the focus to rehabilitation and reform.

In 2016, The Washington Post uncovered that more people were arrested for marijuana possession than for all crimes the FBI classifies as violent. This was according to a 2016 crime report, and it seems like a lot of time and money are being spent on the wrong things. Imagine ruining so many lives through drug arrests only for it to be legalized or decriminalized a few years later. It was long overdue.

Oh, and those trends? It’s not new. Marijuana is now completely legal in 16 states as well as D.C. and is legal for medicinal purposes in 33 states. The tax benefits from legalizing marijuana would be tremendous for a country undergoing an economic depression. Studies have shown that marijuana is expected to be a $50 billion industry by 2026. Also, let’s face it: if you want marijuana, you probably can get it. Legalizing it simply creates a safer, cheaper and regulated market.

But I digress. The point is that decriminalizing drugs marks a pivotal point in America’s history. However, the timing deserves a quick look. While the change in thinking could just be a result of a more progressive generation, it likely isn’t a coincidence that this decriminalization comes after years of an opioid crisis that impacted white communities like “crack” cocaine impacted the Black community in the 20th century. It feels like a problem that is being solved because those in power, who are predominantly white, have only now deemed it relevant.

Reasoning aside, the change is good. And the biggest change of all in recent days has been the American people selecting President-elect Joe Biden and Vice President-elect Kamala Harris to occupy the White House.

While Democrats have been proponents of decriminalization, Harris is infamous for incarcerating drug-users in California. It’s one of the major reasons why she dropped out of the presidential run as the Democratic nominee as she tried to portray herself as a champion for the people while she was busy imprisoning them for drug charges. Nicknamed “the phoniness factor” by The Week, her track record is tough to ignore.

According to the Los Angeles Times, the incarceration rate of African Americans in California is more than five times their share of California’s population since the ’70s when the “war on drugs” began, which includes Harris’ start as a prosecutor in 1990.

And the people have spoken. They want decriminalization and legalization. We can hope that Harris, who has changed her tune about marijuana and drug use, will be a voice for the American people.

“We have a commitment to decriminalizing marijuana and expunging the records of people who have been convicted of marijuana offenses,” Harris said to The Grio on Oct. 17. “When you look at the awful war on drugs and the disproportionate impact it had on Black men and creating then criminal records that have deprived people of access to jobs and housing and basic benefits.”

Words are nice, but action on the federal level would go a long way. I distinctly remember President Donald Trump offering promising words on the subject during his 2016 campaign and throughout his presidency. Meanwhile he took away several Obama-era protections regarding cannabis, such as rescinding or refusing citizenship for immigrants who use marijuana.

Biden and Harris have an opportunity to continue the momentum from Election Day. If they really want to speak for the American people, pay attention. This is what the people want.

As Andre so nobly shouted from the top of a police car pantsless, “legalize everything!”