How long until Manfred is called out?

Rob Manfred's incompetency makes him unfit to run the MLB 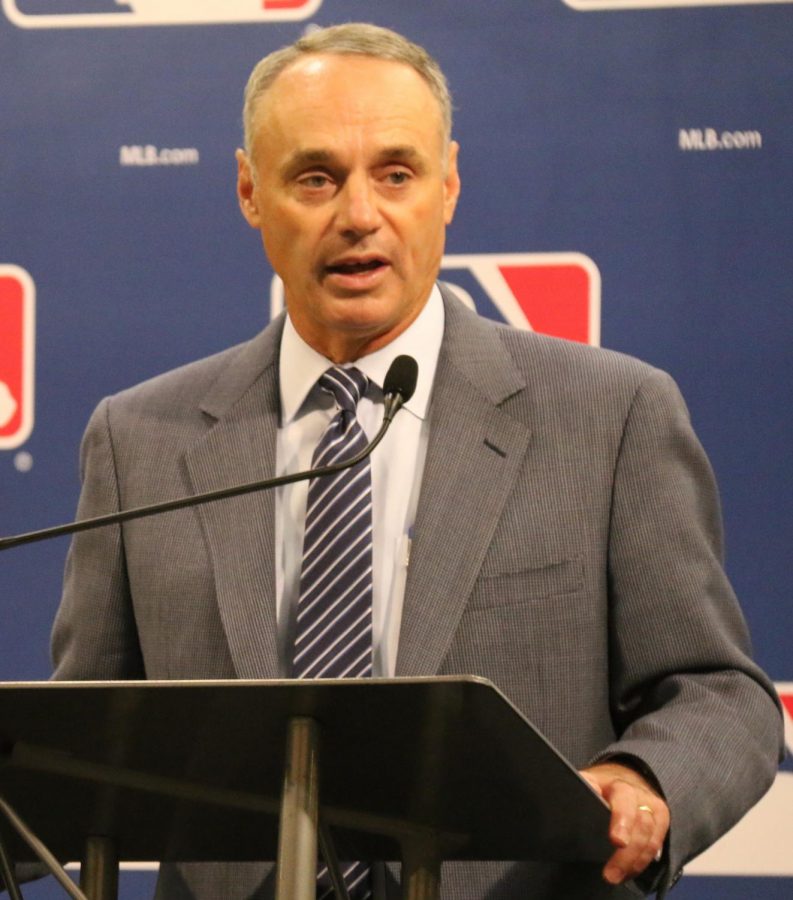 The year 2020 has been disappointing to say the least. The spread of COVID-19 has resulted in people across the country to lose respect for many politicians. But out of all those who people have lost respect for and hated more as the year goes on, there is nobody I personally have lost more respect for than Rob Manfred, the commissioner of the MLB.

Manfred has been the commissioner of the MLB since 2015 when he took over for Bud Selig. Previously, Manfred was the chief operating officer of the MLB for two years.

In the first few years of Manfred’s tenure as commissioner, I liked him. I thought he did a good job when it came to speeding up the pace of play, as everyone knows baseball can be a slow game. In his first season as commissioner, Manfred enforced the rule that batters have to stay in the batter’s box for their entire at-bat and that there has to be a clock in between innings to limit commercial breaks. In 2018, he did even more for the pace of play, reducing the time between breaks once again and limiting the number of times a pitcher can be visited at the mound. Again, I loved these moves.

Manfred also implemented an event called Players Weekend, where all major leaguers get to wear special uniforms and nicknames on the back of their jerseys for a weekend. This was the best move by Manfred, as it helped make baseball more fun for the players, and definitely more enjoyable for the fans to see their favorite players showing their style on the field. Baseball is usually seen as the traditional game, which can be boring to fans, but this event certainly helped show that the game can still be exciting. This helped with younger baseball viewers. By 2018, Manfred was one of the best commissioners in sports, right up there with Adam Silver of the NBA. I never thought that I’d feel the way I do about him today.

In November 2019, news broke that the Houston Astros were accused of stealing signs from their opponents, which is cheating at the highest level. In January 2020, sure enough, this was confirmed after a long investigation by Manfred and the MLB. The Astros used a camera in centerfield, as well as a garbage can in the dugout, to notify the batter what pitch was coming.

Pretty bad, right? These players that cheated should be punished harshly, right? WRONG.

The players got absolutely no punishment, which shocked fans and members of the MLB all over the country, including me. The 1919 Chicago Black Sox are infamous for throwing the World Series for money, and then having eight players banned from the game for life. The 2019 Astros were confirmed cheaters in the World Series, even in 2017 when they won, and they got a slap on the wrist. The only punishments the Astros received were losing a couple draft picks (which means nothing in baseball) and one-year bans for manager A.J. Hinch and general manager Jeff Luhnow. Red Sox manager Alex Cora also got a one-year ban, as he was the bench coach for the Astros in 2017. In the last week, Hinch and Cora have both gotten managing jobs in the MLB again. I was so frustrated and angry with Manfred’s handling of the scandal and the punishments he gave, or lack thereof.

This situation got even worse because not only was Manfred not punishing the Astros, but he was punishing players who threw at any Astro much harsher than if it was any other team. Manfred chose to not only not punish the players who cheated, but to protect them from those who didn’t like that they cheated.

When the Los Angeles Dodgers played the Astros for the first time since the scandal news came out, there was a lot of talk about a pitcher throwing at an Astros player. After all, the Astros did steal a World Series away from the Dodgers by cheating. Sure enough, Dodgers pitcher Joe Kelly threw near Alex Bregman’s head and then taunted Carlos Correa after striking him out. This led to a fight on the field. Kelly got an eight-game suspension, which, once again, is more than anything the Astros players got. My hatred for Manfred was slowly growing, but was still just that — growing.

My loathing for Manfred developed more recently, shortly after the 2020 baseball season. Because of the pandemic, the season was shortened to 60 games instead of the usual 162. Manfred made some rule changes for the abbreviated season, which included a runner being placed on second base for extra innings and the number of playoff teams increasing from 10 to 16. These are two changes I didn’t love at first, but as the season went on, I realized that they made sense for a short season.

However, without COVID-19 existing, these are rule changes I would never like to see in baseball again. Having 16 teams make the playoffs is wrong since it allows mediocre teams to make the postseason. Ten is a great number of teams —12 teams isn’t too bad — but 16 is ridiculous. It’s an easy passage for every decent team to make it to the postseason.

As for the second base rule, it’s just not baseball. The purpose is to speed up games and prevent them from going on forever by putting a runner in scoring position to encourage situational hitting. But if Manfred wants to end games and encourage situational hitting, teams should just change their approach in extras and play small ball by getting on base, stealing, bunting and base running.

In late October 2020, Manfred said in an interview with the Associated Press that he’s highly considering keeping the rule changes going forward. When I saw this, it frustrated me. As a huge baseball fan, my thinking is “if it ain’t broke, don’t fix it.” While there are people who think baseball is boring and has a slow pace of play, these changes don’t help fix that problem at all.

Putting a runner on second base reminds me of Little League, not the majors. When a game goes to extra innings, a team should simply aim to walk, steal, move the runner over and hit a sacrifice fly. Put a runner on second with nobody out that way, not by just awarding them it. Teams should fight for every single base runner. I’ll be even more upset with Manfred if he actually goes through with keeping the changes.

I’ve lost a ton of respect for Manfred, but when he scheduled the Gold Glove Awards on the same night as the 2020 presidential election, my anger only infuriated.

When I first saw the update about the night of the award show, I thought it was a joke because people say the MLB is out of touch with the world. But nope, it was real. I just don’t understand how Manfred and the MLB could hold an award show on the most anticipated night for America for our generation.

It got worse. During Game 6 of the 2020 World Series, Dodgers third baseman Justin Turner tested positive for COVID-19, and he was taken out of the game. After the Dodgers won the game and World Series, Turner returned to the field to celebrate with his teammates. This was obviously a violation of COVID-19 guidelines. Turner was happy after becoming a champion for the first time, but what he did was still wrong.

On Friday, Nov. 6, Manfred announced in a written statement that Turner will not be punished at all for hanging around his teammates and other people on the field after he tested positive. There was immediate outrage from fans, and rightfully so. Once again, Manfred is inconsistent in who he chooses to punish and who he doesn’t. If you cheat the game to win or endanger the safety of everyone around you, not punished. If you throw at a batter who cheated, punished.

Manfred has lost the respect of myself and many baseball fans around the United States. He doesn’t deserve to be the commissioner, and I think the job should be for someone who is more consistent and better understands marketing. Manfred has the right idea of wanting to increase the pace of play and growing the MLB’s younger fan base, but he doesn’t seem to know how to actually execute in doing so.