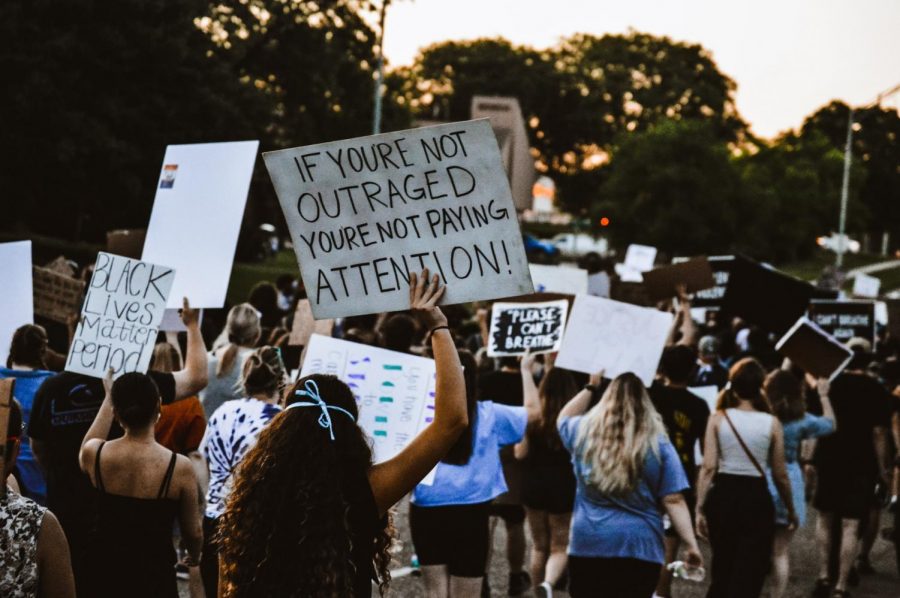 Around midnight last night, I lost power. Immediately, an all too familiar thought pattern emerged in my mind.

I thought about the Zoom classes and interviews I had the next day, as well as housing selection I was assigned to complete that morning. I envisioned driving to the library and sitting out front with my mask on trying to connect to the town library’s WiFi without contracting COVID-19. As I heard the trees whipping outside, I wondered if I would even be able to drive to the library. There were sure to be trees over the roads.

“This year sucks,” I thought.

But then my sleepy, stressed brain had another thought. Maybe 2020 isn’t a fluke, a bad egg, a series of unfortunate coincidences. Maybe 2020 is the result of actions we took or failed to take. Maybe we caused 2020, and to keep cursing it as the cause of all of our misfortunes is to overlook the active role that we played in our own demise.

Let’s look at that storm for example. Climate simulations show that as a result of the earth slowly warming up, storms are becoming more severe. In years past, what could have been just a rainy, windy night became riddled with power outages and tornado warnings.

The outages are a direct result of our outdated power grid.

“Power outages in the U.S. cost customers billions of dollars each year,” according to an article from the Energy Defense Fund. “Weather – the main culprit – has increasingly affected the grid over the past 20 years, a trend that will likely continue.”

A more updated grid would have multiple flows of energy, rather than a one-way flow that is easy to knock out by a downed wire. Additionally, it would have sensors to detect outages so they could be restored faster.

Updates to our power grid are nearly impossible in the current electricity business because electric companies have a monopoly over customers. We don’t have a choice about who we want to be our electric company. There is one option. If we did have a choice, we could choose to buy electricity from the one that seeks environmentally friendly options.

In the world of monopolies, electric companies have no incentive to upgrade power grids. In fact, sometimes these monopolies will donate money to political candidates who vow to protect their status as monopolies and vote against bills that would help grow the solar industry or other environmentally-friendly industries.

In this way, a monopoly — a company that we have not chosen to buy from — has a louder voice in politics than you and I.

Beyond the inconvenience of storms and power outages, this pandemic is also not a 2020 fluke. It is actually quite lucky that we haven’t experienced something like this sooner given the careless way we store animals in slaughterhouses and pump their bodies full of antibiotics. Diseases among animals spread and mutate all the time. The fact that it happened in a bat in Wuhan does not mean it is any less likely for a pig in Oklahoma.

If we want to prevent future pandemics, we need to take a hard look at where the meat people consume comes from. Because of the high demand for meat, the way it is processed is incredibly cramped and rushed. Inspectors don’t always have a chance to examine each batch for bacteria or feces. And the amount of antibiotics used in the animals is actually making them resistant to the drugs and susceptible to more illnesses.

Schools and businesses closing as a result of the pandemic even months after the first case was detected in the U.S. is a direct result of our lack of preparedness to fight a pandemic. Presidents before Donald Trump had a plan to fight pandemics, but his anti-science administration disregarded it.

The raging wildfires, initially in Australia and more recently in California, are also linked to climate change, not bad luck. The rising temperatures make conditions ripe for extreme fires. Trump’s distaste for scientific facts will only increase the frequency of such events.

Police brutality marking 2020’s news cycle is not something new or unusual either. Racism in the U.S. did not disappear when slavery was outlawed nor did it when Brown v. Board was passed or when Barack Obama was elected president. Like so many other issues, it was swept under the rug, skipped over in our history courses and pegged on the communities it expects to fix it themselves.

Kyle Rittenhouse, the 17-year-old white supremacist who shot innocent protesters in Kenosha, Wisconsin, was also a symptom of the pre-existing condition of racism. This wasn’t a freak accident in which mental illness got away from him. There are people similar to Rittenhouse across America as demonstrated in the increasing visibility of the Proud Boys Movement. This isn’t a 2020 movement — Trump just awakened them in 2020.

The fact that 2020 elected a member of QAnon to Congress is not a surprise. Americans have been increasingly caught up with conspiracy theories with the rise of social media as a space for people to share lies as if they are truths.

Sure, 2020 had some crises that didn’t have rhyme or reason. Plane crashes, cancer and bad grades happen every year. But we would be foolish to think that 2020 is just a superstitiously bad year. Next year will be just as awful if we don’t look at the causes of the strife we experienced and the ways in which we caused it. If you want 2021 to be better than 2020, there are some things you can do right now.

1) Donate money to the Georgia senate runoffs. These races will determine whether the G.O.P. retains control of the Senate and whether Senate-majority Leader Mitch McConnel will be able to block President-elect Joe Biden’s agenda on climate change, racial justice and COVID-19.

2) Eat less meat. If you want to create a meat industry that does not foster crowding and disease, we need to decrease the demand for meat.

4) Start mobilizing friends, family and community members to vote in 2022 and 2024. Removing Trump from office does not remove Trumpism from America.

5) Stop acting like 2020 is some apocalyptic movie that is totally out of our control. Cursing 2020 just curses a number. But taking action on the issues that came to light this year will make sure the future is brighter.

My power came back on before I even woke up last night. I had WiFi, and I was able to sign on to my virtual world that I have come to rely on this year. Not all of 2020’s issues can be solved when the sun comes up, but I do believe the problems of the future can be prevented.