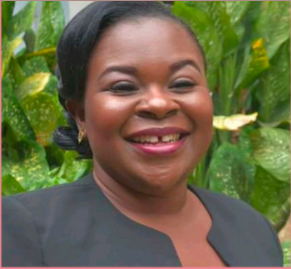 screenshot from My Q

Though it has improved over time, the topic of menstrual education has been a source of conflict for years. Some find it to be taboo, while others recognize it as a mere biological process that should be talked about more openly. In the United States, menstruation education is somewhat accessible, though limited. In Cameroon, however, a country where a variety of cultures find it to be unmentionable, the idea of menstrual education is rarely considered a possibility.

Edwan Ngum Tah, an attorney and civil litigation expert as well as a 2020 Yale World Fellow, recently spoke to members of the Quinnipiac University community about her plans to change the attitudes toward menstruation as well as domestic violence in Cameroon during a virtual event hosted by the Albert Schweitzer Institute on Wednesday, Nov. 4. The panel attracted more than 20 students and professors from various disciplines.

“One of the Albert Schweitzer Institute’s (ASI) focuses for this year is developing our ‘Female Forward Initiative’ focused on promoting a more equitable experience for women,” an ASI human rights and global engagement intern said. “Through this event, we were hoping to gain a global perspective on important issues affecting women. We also wanted to raise awareness of domestic violence and learn about the importance of menstrual education.”

The ASI “conducts programs that link education, ethics, and voluntarism for the sake of creating a more peaceful and sustainable world,” according to its website, and “has drawn notable humanitarians both to campus and to its board.” The intern said that the ASI frequently hosts Yale World Fellows, as they each have a different story and lesson to share. Since the ASI’s focus this year is on female empowerment, hosting Tah was the perfect choice.

“After reading about this year’s World Fellows, Barrister Edwan Ngum Tah stood out for her work helping victims of gender-based violence and improving menstrual education,” the intern said. “As an accomplished attorney and civil litigation expert working in Cameroon, she was able to share her experience and knowledge with us at the event.”

Tah commenced by familiarizing the audience with the Cameroon laws, specifically with nuanced bodies of law like the penal code, which often creates loopholes that result in severe problems for victims of domestic violence.

Although these offenses are considered criminal, Tah said that “gender equality in Cameroon still has serious loopholes.”

“Rape has been criminalized, but when a rapist marries a victim, the penal code becomes tricky. A lot of people want to protect the honor of their families, and it puts the victim under a lot of pressure to get married,“ Tah said. “The law of Cameroon has not recognized rape between husband and wife as a federal offense.”

According to the Centers for Disease Control and Prevention (CDC), one in four women in the U.S. experiences physical violence by an intimate partner. The statistics are even more alarming in Cameroon.

“We have more than 70% of women who have experienced one form or the other of domestic violence by a father or partners,” Tah said. “Why? It has been accepted and normalized — it becomes a way of life. They believe the man has the right to discipline his wife, by refusing to eat her food, by refusing to help with finances and more.”

“It lacks recognition as a social problem,” Tah said. “The law doesn’t recognize it as a criminal offense. Most often, people take it as a way of life. You try to complain, and there is no case. They will say to you, ‘Madam, this is a family issue. You must go home and talk it out with your husband.’ And she goes home, and the story ends there. Women are reluctant to file a complaint when it occurs — most are dependent and don’t have the money to follow up with this matter.”

To combat this growing issue, Tah has worked to “provide medical assistance to victims of gender-based and sexual violence and offer shelter.” She noted that some of the domestic violence incidents that are overlooked, such as men refusing to eat food their wives make, overlaps with the stigma around menstruation/menstrual education. Women may seek shelters such as these for a variety of reasons — it is rarely just domestic violence related.

In addition to the fact that young women miss school during their menstrual cycle, Tah shared that it is even more difficult for women of rural areas to obtain sanitary products. They are disproportionately affected by infections because of their lack of access to menstrual resources combined with a community-wide view of menstruation that humiliates them on a regular basis.

“In the rural areas, they have to wash pads,” Tah said. “Some of them use newspapers, and some of them use rags. This has been the cause of so many infections that are not taken care of. I’ve seen situations where the young girls use leaves. It becomes difficult when they don’t have the income to buy disposable sanitary products.”

Tah has worked to break this stigma with an endeavor called the “Menstrual Hygiene Project.”

“I go to schools to teach girls how to maintain personal hygiene,” Tah shared. “I also teach them how to use products safely. It’s not in the school curriculum. It needs to be a major part of the curriculum to raise awareness.”

When an attendee asked Tah how students at Quinnipiac can make change in menstrual education through their own initiatives, her response was without hesitation.

“Boys need to be included (in this kind of education) too,” Tah said. “You could organize workshops where you invite, for example, nurses and medical personnel to come talk about menstruation and let them know that it is a natural process that all girls have to go through.”

Tah concluded by emphasizing that it takes both the government as well as the people to make change with respect to both domestic violence awareness and menstrual education. Both have a major role to play, she asserted.

“It’s a culture that starts from the womb,” Tah said. “We have to start taking away the idea that women can be discriminated against for a natural process.”