Without any seniors on the Quinnipiac field hockey team, the juniors will have to step up 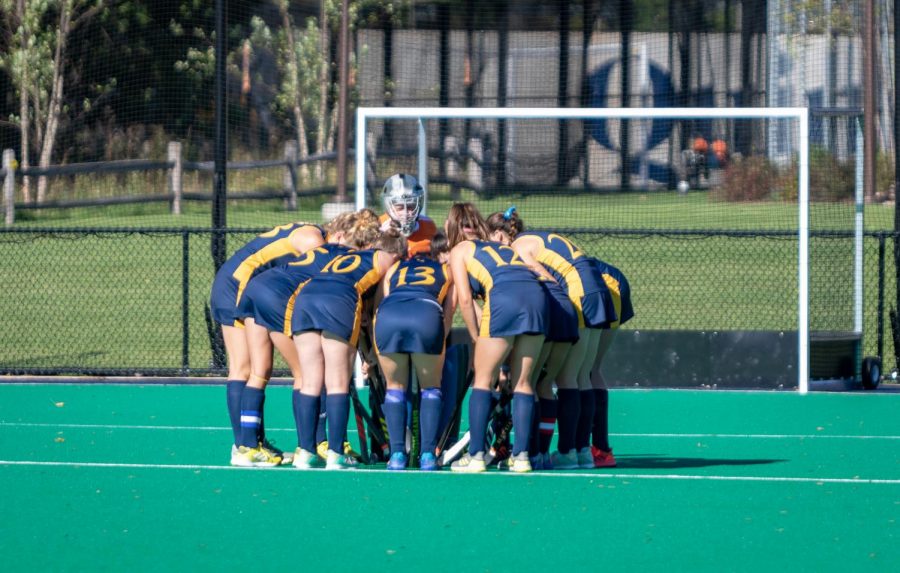 Typically at this time of the year, the Quinnipiac University field hockey team would be right in the midst of conference play. However, we’ve learned that everything about 2020 is unexpected.

This year’s roster features no seniors, the athletes who normally help lead their teams throughout the season. Yet even without the traditional leadership in the locker room, the Bobcats are finding their way. This time is a little different, as the team decided that four players would be in a “leadership group.”

Even with all the teams she’s gotten to coach and the experience she’s gained, Quinnipiac field hockey head coach Becca Main believes this leadership group stands out.

“It’s not often you get a variety of leadership that blends well,” Main said. “They are definitely a group of individuals that have found a leadership style that works for them. Probably the most seamless group in terms of allowing each other to be leaders in the way that they lead best.”

One may think having too many minds could create a lot of tension, but in this instance it’s the balance that makes the foursome work.

“I think we each have very different personalities, but we somehow all work together very well,” Watson said. “I think that players go to each of us separately for different things, which really works out nicely.”

On the field, Whipkey and Halley each finished with one goal and two assists last season, while Dugan had one goal and Watson ended the season with one assist. But, it’s the off-field presence each player carries with them that makes them stand out.

Watson mentioned how a lot of her teammates confide in her, and that they go to her for any situation, which gives her a sense of comfort.

During team workouts, Watson likes to hold teammates accountable. She isn’t afraid to pinpoint teammates who don’t perform at a high level and doesn’t tolerate excuses as to why those expectations aren’t being met.

“I think that’s something that every leader should do,” Watson said. “I think we all do that, but I’m definitely more outraged about it.”

Another quality of leadership is energy. An example of this could be a professional football player celebrating after scoring a touchdown or getting a sack. That type of enthusiasm is what Whipkey brings as a leader.

When teammates arrive to practice, Whipkey’s level of excitement increases, and she looks forward to showing that on the field.

“I’m very loud, so I’m not shy to voice an opinion or call the team for a huddle and kind of get us reorganized,” Whipkey said.

When New England Patriots head coach Bill Belichick sat former running back Jonas Gray the game after he scored four touchdowns against the Indianapolis Colts in 2014, some would describe that as an example of Belichick’s high standards. That’s the term Halley expects of herself and teammates.

“If I don’t perform the way I wanted to, it really bothers me,” Halley said. “So, I feel like I bring that to the team, and I expect good things from them, so they know they hold themselves accountable.”

Being loud, holding other players accountable and having energy are qualities not all leaders possess. Some would rather let the actions do the talking, and that’s what Dugan brings to the table.

Main also led the Bobcats to a 2013 MAAC championship and the NCAA field hockey tournament three times. But as much as she’s done on the sidelines, Watson explained how much Main means to her off the field.

Watson said how Main was the one that recruited the entire leadership group. She’s known Main since she was a sophomore in high school and credits Main for aiding in her personal development.

“She’s really big on building us as females like out into the workplace, which is huge,” Watson said. “I think it’s overlooked by a lot of coaches that it’s not all about the sport, it’s about who you’re going to be as people once you leave it.”

Last season, Quinnipiac finished 5-13 overall and 2-5 in the Big East. Whenever the Bobcats get the green light to play, Watson assured that the squad will be ready.

“This has been tough,” Watson said. “I honestly didn’t think it was going to be as hard as it is right now. But we’re really grinding, and I think we’re excited to show what we’ve been working really hard at.”